Thanks to Reddit, I have a theory about Spongebob.

The theory is that we all come into the world as Spongebob—excited and imaginative—and then, as life happens, we morph into Squidward—disillusioned and grumpy. 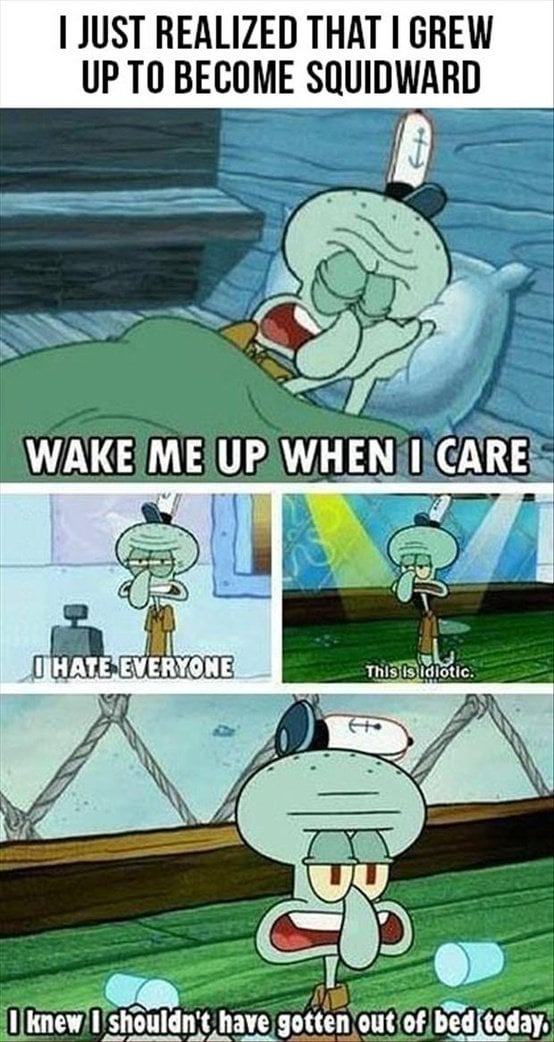 Maybe you don’t remember your Spongebob phase. Maybe you never had a chance. That’s ok too. I think there are very admirable things about Squidward. He’s not a people pleaser. He practices the clarinet in his free time. He’s responsible.

But he also envies Spongebob.

Remember the episode about imagination? (just learned that the episode is actually called “Idiot Box” lol)

In the episode, Spongebob and Patrick are having so much fun inside a cardboard box that Squidward can’t help but try it out himself. Ultimately, he’s unsuccessful because he has no imagination.

My question for you is this — When did you start becoming less like Spongebob, and more like Squidward?

I believe we have the ability to access our inner Spongebob at any moment. Today. Right now.

You have to stand firm in your Spongebobness…He has wonderful things happen to him because he exists in the world as love. Squidward often has pitfalls and disappointments because he is expecting life to be bad.

Things I consumed / created / did this week

I’ve been having a lot of fun updating my Pinterest boards. Very 2011 of me, I know, but I’m having fun.

This grandma’s massive bag full of stuff on TikTok

The infinite well of creativity

I updated the newsletter banner… what do you think? 💅

You just read issue #27 of Soft Practice. You can also browse the full archives of this newsletter.