Why I Never Use Shallow Rendering

Tests should help me be confident that my application is working and there are better ways to do that than shallow rendering.

Before we get into today’s newsletter I want to ask you to do a few things:

I remember a few years ago when I got started with React I decided I needed to figure out how to test React components. I tried shallow from enzyme and immediately decided that I would never use it to test my React components. I’ve expressed this feeling on many occasions and get asked on a regular basis why I feel the way I do about shallow rendering and why react-testing-library will never support shallow rendering.

So finally I’m coming out with it and explaining why I never use shallow rendering and why I think nobody else should either. Here’s my main assertion:

This is highly concerning to me because not only does it make testing frustrating, but it also lulls you into a false sense of security. The reason I write tests is to be confident that my application works and there are far better ways to do that than shallow rendering.

What even is shallow rendering?

For the purposes of this article, let’s use this example as our subject under test:

Here’s an example of a test that uses shallow rendering with enzyme:

To understand shallow rendering, let’s add a console.log(wrapper.debug()) which will log out the structure of what enzyme has rendered for us:

You’ll notice that it’s not actually showing the CSSTransition which is what Fade is rendering. This is because instead of actually rendering components and calling into the Fade component, shallow just evaluates the props that would be applied to the React elements created by the component you’re shallowly rendering. In fact, if I were to take the render method of the HiddenMessage component and console.log what it’s returning, I’d get something that looks a bit like this:

Look familiar? So all shallow rendering is doing is taking the result of the given component’s render method (which will be a React element (read What is JSX?)) and giving us a wrapper object with some utilities for traversing this JavaScript object. This means it doesn’t run lifecycle methods (because we just have the React elements to deal with), it doesn’t allow you to actually interact with DOM elements (because nothing’s actually rendered), and it doesn’t actually attempt to get the react elements that are returned by your custom components (like our Fade component).

Why people use shallow rendering

There were more responses, but these sum up the main arguments for using shallow rendering. Let’s address each of these:

Have you ever seen or written a test that looks like this?

This is a great reason to use shallow rendering, but it’s a really poor testing practice. There are two really important things that I try to consider when testing:

This kind of test fails both of those considerations:

The reason this kind of test fails those considerations is because it’s testing irrelevant implementation details. The user doesn’t care one bit what things are called. In fact, that test doesn’t even verify that the message is hidden properly when the show state is false or shown when the show state is true. So not only does the test not do a great job keeping us safe from breakages, it’s also flakey and doesn’t actually test the reason the component exists in the first place.

In summary, if your test uses instance() or state(), know that you’re testing things that the user couldn’t possibly know about or even care about, which will take your tests further from giving you confidence that things will work when your user uses them.

There’s no getting around the fact that shallow rendering is faster than any other form of testing react components. It’s certainly way faster than mounting a react component. But we’re talking a handful of milliseconds here. Yes, it will add up, but I’d gladly wait an extra few seconds or minutes for my tests to finish in exchange for my tests actually giving me confidence that my application will work when I ship it to users.

In addition to this, you should probably use Jest’s capabilities for only running tests relevant to your changes while developing your tests so the difference wont be perceivable when running the test suite locally.

Not only does shallow rendering not render third party components, it doesn’t even render in-file components. For example, the <fade></fade> component we have above is an implementation detail of the <hiddenmessage></hiddenmessage> component, but because we’re shallow rendering <fade></fade> isn’t rendered so changes to that component could break our application but not our test. That’s a major issue in my mind and is evidence to me that we’re testing implementation details.

In addition, you can definitely unit test react components without shallow rendering. Checkout the section near the end for an example of such a test (uses react-testing-library, but you could do this with enzyme as well) that uses Jest mocking to mock out the <csstransition></csstransition> component.

I should add that I generally am against mocking even third party components 100% of the time. The argument for mocking third party components I often hear is Testing composed components introduces new dependencies that might trigger an error while the unit itself might still work as intended.. But isn’t the point of testing to be confident the application works? Who cares if your unit works if the app is broken? I definitely want to know if the third party component I’m using breaks my use case. I mean, I’m not going to rewrite their entire test base, but if I can easily test my use case by not mocking out their component then why not do that and get the extra confidence?

I should also add that I’m in favor of relying more heavily on integration testing. When you do this, you need to unit test fewer of your simple components and wind up only having to unit test edge cases for components (which can mock all they want). But even in these situations, I still think it leads to more confidence and a more maintainable testbase when you’re explicit about which components are being mocked and which are being rendered by doing full mounting and explicit mocks.

I’m a huge believer of the guiding principle of react-testing-library:

> The more your tests resemble the way your software is used, the more confidence they can give you. - Kent C. Dodds 👋

That’s why I wrote the library in the first place. As a side-note to this shallow rendering post, I want to mention there are fewer ways for you to do things that are impossible for the user to do. Here’s the list of things that react-testing-library cannot do (out of the box):

All of these things are things which users of your component cannot do, so your tests shouldn’t do them either. Below is a test of the <hiddenmessage></hiddenmessage> component which resembles the way a user would use your component much more closely. In addition, it can verify that you’re using <csstransition></csstransition> properly (something the shallow rendering example was incapable of doing).

I hope this is helpful! We’re all just trying our best to deliver an awesome experience to users. I wish you luck in that endeavor!

Looking for a job? Looking for a developer? Check out my job board: kcd.im/jobs There are two remote jobs and one job in Portland on there right now!

Learn more about testing from me:

> When I copy something to my clipboard, I get this odd sensation that I’m physically holding something in my (left) hand until I paste it where it needs to go. Am I alone in this? – 7 Jul 2018

> Dah, every time I try to write my: “Never use shallow rendering” blog post I can’t get myself to do it. I just keep thinking about all the people who will yell at me for having an opinion that doesn’t align with their own and I just don’t want to deal with that… Sorry friends. – 8 Jul 2018 (that’s this post!)

This week’s blog post is “What is JSX”. It’s the published version of my newsletter from 2 weeks ago. If you thought it was good, go ahead and give it some claps (👏x50) and a retweet: 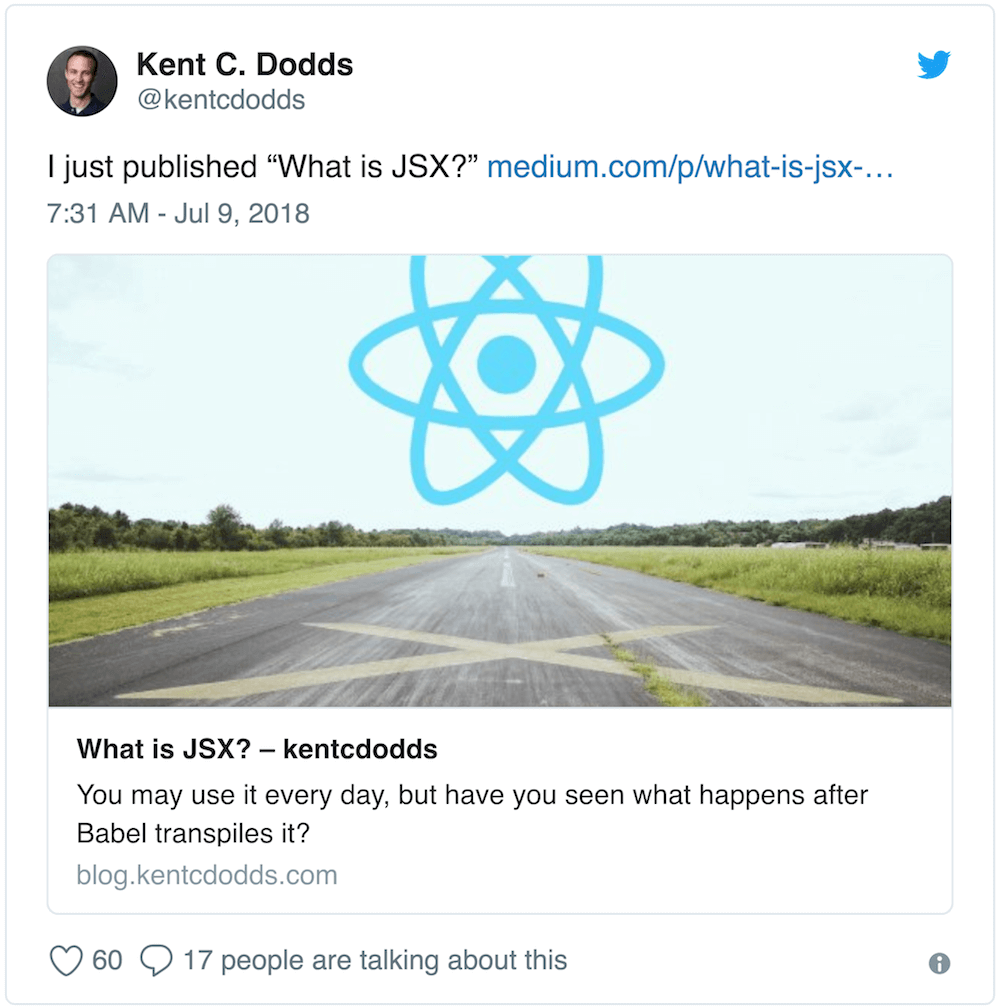 You just read issue #13 of Kent C. Dodds News. You can also browse the full archives of this newsletter.