What does "Testing Implementation Details" even mean?

Testing implementation details is a recipe for disaster. Why is that? And what does it even mean?

> NOTICE: If you missed the 40% off early bird sale on TestingJavaScript.com that’s a real bummer, but there’s a 20% off sale going on RIGHT NOW! AND TEAM LICENSES ARE NOW AVAILABLE!!! > > Oh, also, I’m back to my regular weekly emails. Thanks for sticking with me through the launch sale :)

Last year when I was using enzyme (like everyone else at the time), I stepped carefully around certain APIs in enzyme. I completely avoided shallow rendering, never used APIs like instance(), state(), or find('ComponentName'). And in code reviews of other people’s pull requests I explained again and again why it’s important to avoid these APIs. The reason is they each allow your test to test implementation details of your components. People often ask me what I mean by “implementation details.” I mean, it’s hard enough to test as it is! Why do we have to make all these rules to make it harder?

Why is testing implementation details bad?

Let’s take a look at each of these in turn, using the following simple accordion component as an example:

And here’s a test that tests implementation details:

Raise your hand if you’ve seen (or written) tests like this in your codebase (🙌).

Ok, now let’s take a look at how things break down with these tests…

A surprising number of people find testing distasteful, especially UI testing. Why is this? There are various reasons for it, but one big reason I hear again and again is that people spend way too much time babysitting the tests. “Every time I make a change to the code, the tests break!” This is a real drag on productivity! Let’s see how our tests fall prey to this frustrating problem.

Awesome, we do a quick check in the app and everything’s still working properly, so when we come to this component later to support opening multiple accordions, it’ll be a cinch! Then we run the tests and 💥kaboom💥 they’re busted. Which one broke? setOpenIndex sets the open index state properly.

Is that test failure warning us of a real problem? Nope! The component still works fine.

This is what’s called a false negative. It means that we got a test failure, but it was because of a broken test, not broken app code. I honestly cannot think of a more annoying test failure situation. Oh well, let’s go ahead and fix our test:

The takeaway: Tests which test implementation details can give you a false negative when you refactor your code. This leads to brittle and frustrating tests that seem to break anytime you so much as look at the code.

Ok, so now let’s say your co-worker is working in the Accordion and they see this code:

Immediately their premature performance optimization feelings kick in and they say to themselves, “hey! inline arrow functions in render are bad for performance, so I’ll just clean that up! I think this should work, I’ll just change it really quick and run tests.”

Cool. Run the tests and… ✅✅ awesome! They commit the code without checking it in the browser because tests give confidence right? That commit goes in a completely unrelated PR that changes thousands of lines of code and is understandably missed. The accordion breaks in production and Nancy is unable to get her tickets to see Wicked in Salt Lake next February. Nancy is crying and your team feels horrible.

This is called a false positive. It means that we didn’t get a test failure, but we should have! So how do we cover ourselves to make sure this doesn’t happen again? We need to add another test to verify clicking the button updates the state correctly. And then I need to add a coverage threshold of 100% code coverage so we don’t make this mistake again. Oh, and I should write a dozen or so ESLint plugins to make sure people don’t use these APIs that encourage testing implementation details!

… But I’m not going to bother… Ugh, I’m just so tired of all these false positives and negatives, I’d almost rather not write tests at all. DELETE ALL THE TESTS! Wouldn’t it be nice if we had a tool that had a wider pit of success? Yes it would! And guess what, we DO have such a tool!

Sweet! A single test that verifies all the behavior really well. And this test passes whether my state is called openIndex, openIndexes, or tacosAreTasty 🌮. Nice! Got rid of that false negative! And if I wire up my click handler incorrectly, this test will fail. Sweet, got rid of that false positive too! And I didn’t have to memorize any list of rules or install a bunch of annoying ESLint plugins. I just use the tool in the typical usage, and I get a test that actually can give me confidence my accordion is working as the user wants it too.

So… What are implementation details then?

Here’s the simplest definition I can come up with:

> Implementation details are things which users of your code will not typically use, see, or even know about.

So the first question we need an answer to is: “Who is the user of this code.” Well, the end user who will be interacting with our component in the browser is definitely a user. They’ll be observing and interacting with the rendered buttons and contents. But we also have the developer who will be rendering the accordion with props (in our case, a given list of items). So React components typically have two users: end-users, and developers. End-users and developers are the two “users” that our application code needs to consider.

This is precisely what the react-testing-library test does. It passes fake props to the Accordion, then it interacts with the rendered output by querying the output for the contents that will be displayed to the user (or ensuring that it wont be displayed) and clicking the buttons that are rendered.

Now consider the enzyme test. With enzyme, we access the state of openIndex. This is not something that either of our users care about directly. They don’t know that’s what it’s called, they don’t know whether the open index is stored as a single primitive value, or stored as an array, and frankly they don’t care. They also don’t know or care about the setOpenIndex method specifically. And yet, our test knows about both of these implementation details.

This is what makes our enzyme test prone to false negatives. Because by making our test use the component differently than end-users and developers do, we create a third user our application code needs to consider: the tests! And frankly, the tests are one user that nobody cares about. I don’t want my application code to consider the tests. What a complete waste of time. I don’t want tests that are written for their own sake. Automated tests should verify that the application code works for the production users.

> The more your tests resemble the way your software is used, the more confidence they can give you. - me

Oh, and React Hooks got you all excited? If you rewrite that accordion component to use React hooks, the enzyme test fails terribly, while the react-testing-library test continues to work.

I hope that’s helpful to you! If you really want to take your testing to the next level, then I definitely recommend you get a Pro license for TestingJavaScript.com 🏆

P.S. If you’d like to play around with all this, here’s a codesandbox.

P.S.P.S. As an exercise for you… What happens to that second enzyme test if I change the name of the AccordionContents component? {insert biggest eye roll ever} 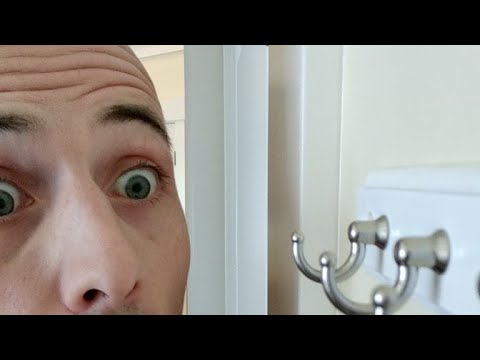 > I made a mistake today and did some people wrong/lost some trust. I apologized of course and I’m trying my best to make it right. But sometimes there’s not much that can be done other than move on. Trying to, but it’s rough. Think before you act/speak folks. – 25 Oct 2018

> It’s going to be so fun to discover all the bad practices we come up with using #ReactHoooks. I mean, they seem harmless, but if there’s one thing we’re great at, it’s finding ways to overcomplicate something that’s really simple. > > Avoid early abstraction! – 4 Nov 2018

This week’s blog post is “The Merits of Mocking”. It’s the published version of my newsletter from a while ago. If you thought it was good, go ahead and give it some claps (👏x50) and a retweet: 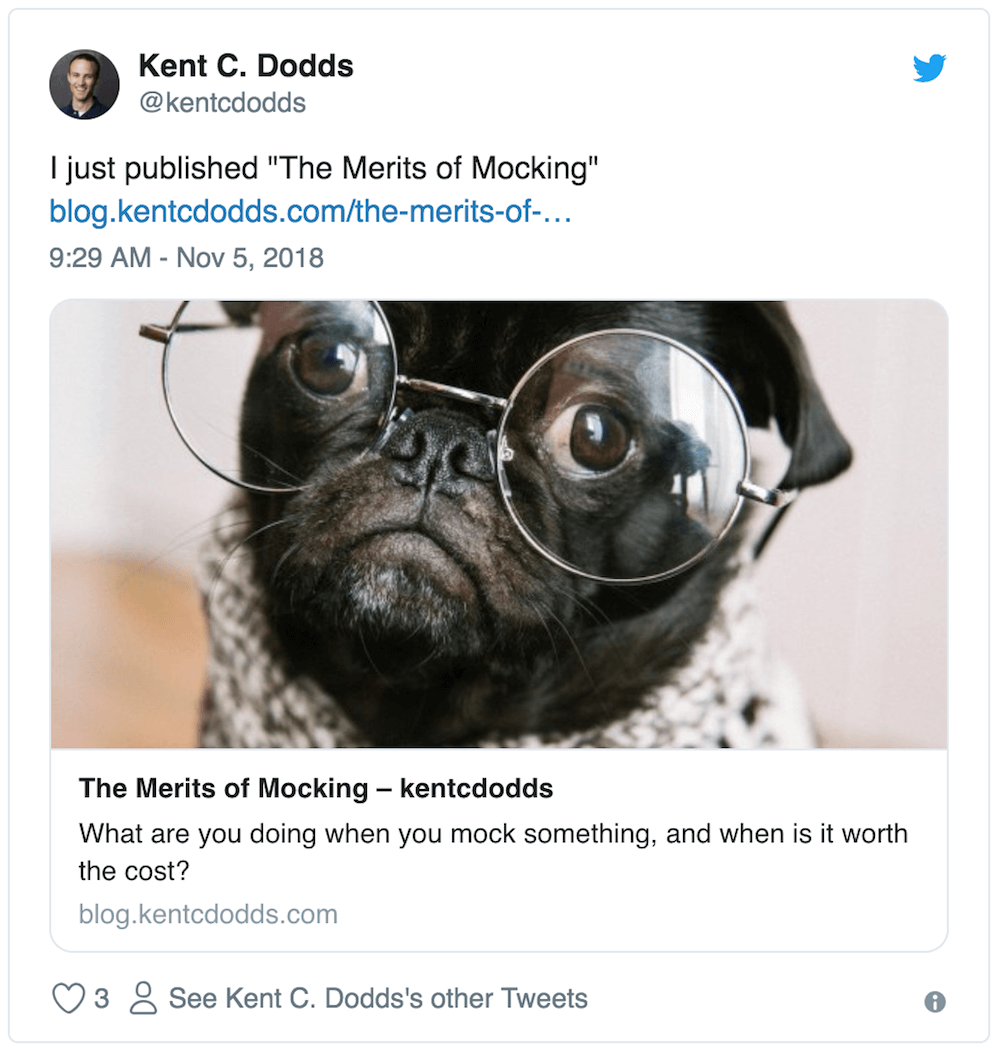 You just read issue #38 of Kent C. Dodds News. You can also browse the full archives of this newsletter.