React/JSX as a server-side templating language

> NOTE: I’ve been teasing about something big that I have coming. I’m totally not joking. I’m working on something really huge and y’all will be the first to know about it. Stay tuned. It’s weeks away and I think you’re going to love it.

The app is paypal.me. The way it works is we have the home, terms, and supported countries pages that are 100% rendered HTML/CSS (and just a tiny bit of vanilla JS), and then the profile and settings pages are rendered by the server as “skeleton” html pages (with SEO-relevant tags and a root <div> etc.) and then the client-side React app kicks in to load the rest of the data/interactivity needed on the page.

> I should note that generally I’d suggest that if you’re doing any server rendering at all, you’d probably find better performance doing server rendering for everything (using something like Next.js or gatsby if you can), not just the skeleton index.html as we’re doing on paypal.me. We have our reasons (there’s nuance in everything and I’m not going to get into this).

Before my PR, we actually had two systems in place. We used express-es6-template-engine for the profile and settings pages (which are actually the same page), and for the marketing pages one of our engineers came up with a tagged-template literal solution that was react-like (with functions that accepted props and returned a string of HTML). So engineers that work on this codebase would have to know and maintain:

It was decided to simplify this down to a single solution: React and JSX for both frontend and backend. And that’s the task I took. I want to explain a few of the gotchas and solutions that I ran into while making this transition.

This was actually as easy as npm install --save react react-dom in the server. Because paypal.me uses paypal-scripts, the server’s already compiled with the built-in babel configuration which will automatically add the necessary react plugins if the project lists react as a dep. Nice! I LOVE Toolkits!

The biggest challenge I faced with this involves integration with other PayPal modules that generate HTML that need to be inserted into the HTML that we’re rendering. One such example of this is our polyfill service that I wrote about a while back which inserts a script tag that has some special query params and a server nonce. We have this as middleware and it adds a res.locals.polyfill.headHTML which is a string of HTML that needs to appear in the <head> that you render.

With the template literal and es6-template-engine thing we had, this was pretty simple. Just add ${polyfill.headHTML} in the right place and you’re set. In React though, that’s kinda tricky. Let’s try it out. Let’s assume that polyfill.headHTML is <script src="hello.js"></script>. So if we do this:

This will result in HTML that looks like this:

This is because React escapes rendered interpolated values (those which appear between { and }). This is a cross site-scripting (XSS) protection feature built-into React. All of our apps are safer because React does this. However, there are situations where it causes problems (like this one). So React gives you an escape hatch where you can opt-out of this protection. Let’s use that:

So this would result in:

But that’s not at all semantically accurate. A div should not appear in a head. We also have some meta tags. It technically works in Chrome, but I don’t know what would happen in all the browsers PayPal supports and I don’t want to bust SEO or functionality of older, less-forgiving browsers for this.

So here’s the solution I came up with that I don’t hate:

The implementation of that RawText component is pretty simple:

So this will result in:

This doesn’t solve the problem by itself. Here’s what we do when we render the page to HTML:

That removeRawText function is defined right next to the RawText component and looks like this:

So, effectively what our rendered string looks like is this:

So we have a simple component we can use for any raw string we want inserted as-is into the document without having to add an extra meaningless (and sometimes semantically harmful) DOM node in the mix. (Note, the real solution to this problem would be for React to support dangerouslySetInnerHTML on Fragments).

> NOTE: The fact that this logic lives in a function right next to the definition of the RawText component rather than just hard-coding the replacement where it happens is IMPORTANT. Anyone coming to the codebase and seeing RawText or removeRawText will be able to find out what’s going on much more quickly.

In our client-side app, we use a localization module that my friend Jamund and I worked on that relies on a singleton “store” of content strings. It works great because there’s only one locale that’ll ever be needed through the lifetime of the client-side application. Singletons don’t work very well on the backend though. So I built a simple React Context consumer and provider which made it easier to get messages using this same abstraction without the singleton. I’m not going to share the code for it, but here’s how you can use it:

It worked out pretty well. The Message component renders the MessageConsumer component which will get the content out of context and retrieve the message with the given key.

Other things of note:

I’m pretty pleased that we now only have one templating solution for the entire app (both frontend and backend). I think that’ll reduce the maintenance burden of the app and that’s a real win. Trying things out and doing experiments is a good thing, but circling back to refactor things to the winning abstraction is an important step to making applications that are maintainable for the long-term. I hope this is helpful to you! Good luck!

> When you think a whole bunch of people are doing something very stupid, but you know for a fact that they couldn’t possibly all be that stupid, then maybe you misunderstand what it is they’re doing… – Sep 11, 2018

> FYI @eggheadio lessons have more than just the video (w/ closed captions). Subscribers can also look at a transcript (which is basically a blog post version of the video) and a discussion form. > > If you prefer to learn by reading, check it out! > > egghead.io/lessons/react-replace-react-… – Sep 11, 2018 (this tweet has a short gif showing what it looks like)

> I know it looks like a pizza , but this is my first sketch of Shurlan. The giant, self-sufficient and ridiculously organized city setting for my novel. – Sep 12, 2018 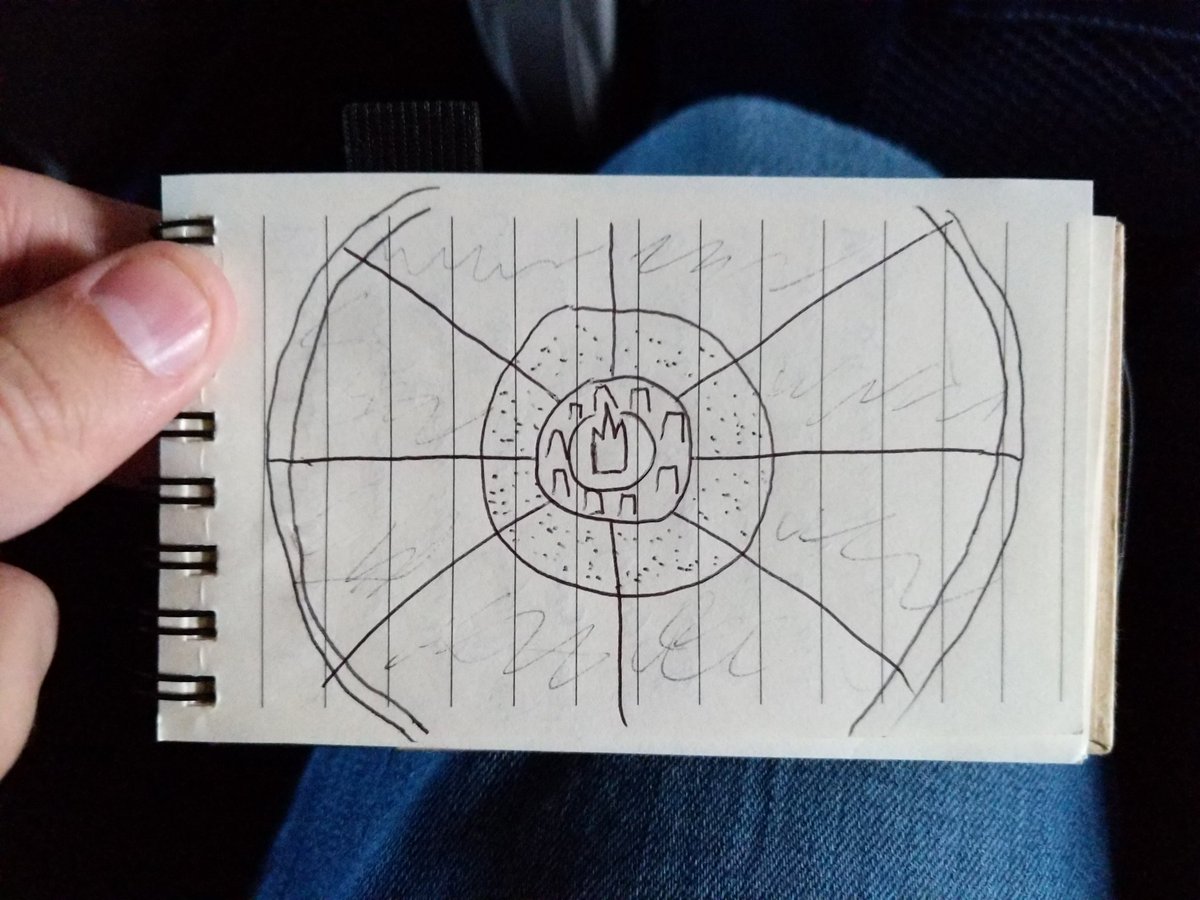 > People often tell me they are concerned they don’t know what to test. I believe this is a failure of tooling. > > I’ve taken this into consideration with react-testing-library and as people have been starting to use it, they tell me they don’t have this concern as much. – Sep 12, 2018

This week’s blog post is “Getting Noticed and Widening Your Reach”. It’s the published version of my newsletter from 2 weeks ago. If you thought it was good, go ahead and give it some claps (👏x50) and a retweet: 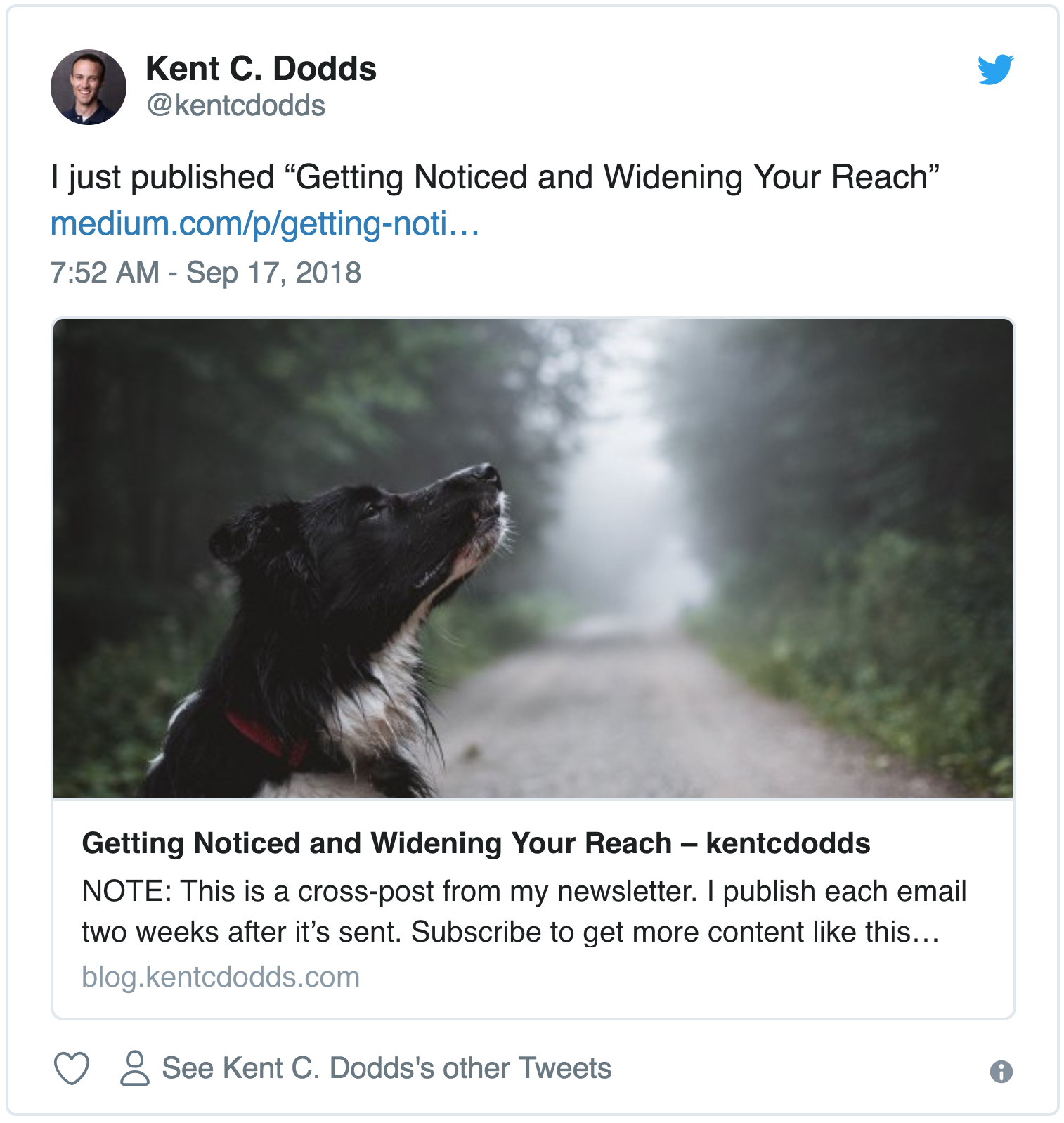 You just read issue #23 of Kent C. Dodds News. You can also browse the full archives of this newsletter.