Two hours of great public radio, tools of the trade, and an upcoming ordination.

This time around I share about two hours of great Public Radio I experienced, a few of my favorite current tools, and some exciting personal news.


But first: an 18-minute video that is well worth your time.

Grab some paper for notes, a box of tissues, and find a quiet place to watch Andy Crouch talk about Overcoming Our Greatest Affliction. What begins as a history lecture of sorts quickly turns into a moving call to modern Christians in response to an unlikely verse from St. Paul's Epistle to the Romans (I won't tell you which one ... just watch!):

This was the revolutionary act of the early Church: in an impersonal world, to recognize persons of every possible status - to see them all and to know them all by name, and to name them brothers and sisters.

Crouch closes with a glimpse into the not-so-distant future:

We're not done with revolutions. The 21st century will bring the next one; it will be the biological revolution, in which life will no longer be begotten - conceived in the most profound intercourse of persons - but life will be made. That will be the next frontier of power.

âAnd in an impersonal world ... the restoration of culture is the recognition of persons. That is what the early Christians did for Rome. It is what we must do today.

Trust me, it is worth watching.

On Friday, December 15th, I was caught in a drive and a canceled meeting and was able to catch two great hours of Public Radio.

From 12pm-1pm, KERA aired the final show of Anything You Ever Wanted to Know. You can read a little bit about the show and its host here.

From 1pm-2pm, Kris Boyd's Think featured an interview with the hosts of one of my favorite shows/podcasts: A Way With Words. (Nerd alert.)

I knew about the final airing of Anything, but did not plan on it being followed by such a great Think episode.

Tools of the Trade

Here are a few of my favorite tools. Some just help me get things done; others offer a little beauty along the way.

Especially when deadlines approach or have already passed, I can have the attention span of a gnat. Enter the Pomodoro Technique. The gist of this approach is working in hyper-focused bursts, followed by short breaks to let your mind wander. You can read more about it here, and my favorite iOS app for implementing the technique is called Focus Keeper.

This is a fantastic app that Apple has recently crippled by no longer allowing it to block apps on iOS. I certainly hope they change their minds soon, because the Apple alternative (Screen Time) is terrible. It allows you to override your app-specific time limits with the push of a button. Freedom, on the other hand, offers no way around its restrictions. Read more about Freedom here.

I still use Freedom extensively, especially on my computer. The short version: it allows you to block specific sites, programs, or categories for a set amount of time. I can, for example, block access to all email for 6 hours. Or I can block access to any sort of entertainment site or app for an entire weekend. The possibilities are endless, and there is no way to undo your restrictions once they begin.

Plus, as I highlighted here a couple weeks back, I find them better at changing habits than other similar programs.

This planner features Daily Office readings (you can choose the 1979 BCP version or the new ACNA Daily Office, depending on your ecclesial loyalties), plenty of space to make plans, as well as beautiful introductions to each Liturgical Season.

Check out Mod Lit here, and a few photos from my own planner here.

And now on to a personal announcement:


God Willing and the People Consenting, I will be ordained a Transitional Deacon in early 2019.

I have created a short primmer on ordination in the Anglican context, especially for our friends who will be attending the ceremony. You can read it here, and see a preview of some of the questions it addresses below. This has been quite a process, and I received final confirmation this week that the service will happen in early 2019. Viv and I will get word out soon once a final date and time is set.

Interesting note: you can read more about it all by clicking below, but in the Anglican tradition those who are planning to become Priests are first ordained Deacons, hence the term Transitional Deacon. After at least six months of serving as a Deacon, you are then ordained a Priest. 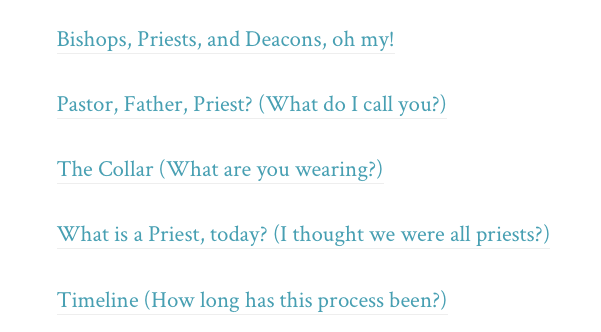 Thanks for reading along!

In case we have not met:
I live in Dallas, TX with my wife Vivien and our two kids. I am the Logic School Principal and a teacher at Coram Deo Academy of Dallas, and serve as a Pastor at Church of the Incarnation. I have also written a short book on Galatians that you might find interesting, if you find that sort of thing interesting.

You just read issue #3 of Graphē. You can also browse the full archives of this newsletter.