Welcome to the first edition of The .NET Core Podcast newsletter for September.

And just like that we’re starting year 2 of the podcast. I could never have imagined, back when I had the first idea for the podcast

over on the {CodingBlocks}.NET slack group

that it would make it to 2 years and have the reach that it currently does.

As such, let’s take a quick look at how the podcast stats stood when I was writing the previous newsletter: 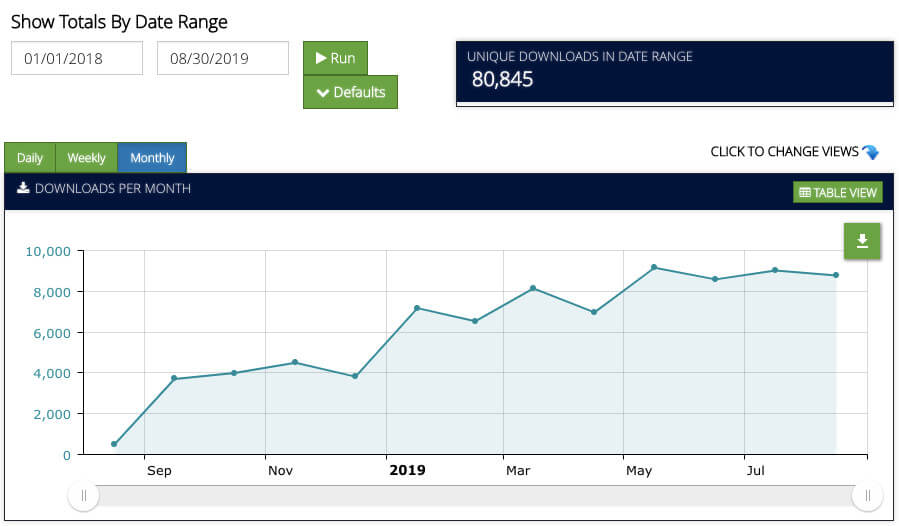 That’s a difference of (just short of) 3,500 downloads… in 9 days. That’s phenomenal, and a real testament to the guests who have been on the show and are discussing such interesting topics.

I’d like to thank you all for taking the time to listen to the show. It’s amazing to know that so many people are listening in.

unless you're new to the newsletter, in whcih case: welcome!

that I was running a competition of sorts last month. Essentially, to celebrate the one year anniversary of the show, I was giving away some neat stuff. What stuff you ask? How does:

Except that that competition has now ended. I’ll be reaching out to the lucky winners in the next few days, so keep an eye on your inboxes.

We’re less than a month away from the release of NET Core 3.0. This was announced by Damien Edwards yesterday, on The .NET Community Standup

as a pro-tip: I would recommend watching these whenever you can

Apparently, it will be released/announced at .NET Conf this year, so you’ll have to tune in to that in order to see all of the cool new features that are coming our way.

unless you've been using the previews, that is.

This episode was published to Patreon supporters a few days ahead of the “regular” RSS feed on August 21, 2019.

In this episode of The .NET Core podcast we In this episode I interviewed James about his open source library Coravel, which is based on the extremely popular PHP library Laravell. Some of you may know James from his blog, his community outreach over at dev.to, or from his work on Coravel

The episode was later released to the “regular” RSS feed on August 23rd, 2019 at 12:30 GMT. The show notes, including a transcription, are available at: Episode 32 - Coravel with James Hickey.

This episode will be published to Patreon supporters a few days ahead of the “regular” RSS feed on September 4th, 2019 at 12:30 GMT.

In this episode of The .NET Core podcast we In this episode I interviewed James about his work dog fooding most of the technologies we’ve all used, from Xamarin to .NET Core. We also talked about releasing apps using preview bits, MSIX, and the Windows Store.

We recorded this interview about a month ago, so it’s a fascinating listen when you think about the fact that, at the time, James was pushing changes to a live application in the Windows Store which was using preview builds of the .NET Core 3.0 runtime. He goes into wy he loves to do that, in the interview.

Also, don’t forget to take a look at his podcasts:

On release day, you’ll be able to check out the show notes at: Episode 33 - .NET Core 3.0, MSIX and The Windows Store with James Montemagno. However the pervious link will not work until 12:30 GMT on release day, which is September 7th, 2019.

This was an amazing episode to record, because Jim is so passionate about the work that he does for Microsoft and you can really hear it in his voice. In fact, I met him a short while after the episode went live, at MS Ignite, and he was just as passionate about new technologies in person as he was on the episode

in fact, I'd probably say that he's more passionate about it in person

This was also the episode when we found out that we can use the Mono Linker to produce AoT builds of .NET Core applications. which is something that is actually included in the .NET Core 3.0 tool chain

who said that I don't bring you exclusives on this show?

Full show notes, including text snippets from the episode

I'm working on getting the older episodes transcribed, but have yet to finish them

So if you’re going to be at either of these events and spot me, do come over and say hello. I’m planning on having some swag

for both this show and the Waffling Taylors

to give away to folks who do say hello to me, so you wont walk away empty handed.

There are a lot of new things coming to .NET Core 3.0, including a lot of simplification of tooling, new additions to the tool chain

I mentioned above that the Mono Linker is now included in tool chain for .NET Core 3.0

and some really cool new features. As such, I’d recommend that you all take a look at this guide for migrating your applications.

Of course, you could just as easily do a

and copy your code over, but it’s useful to know about the migration path (and the changes between 2.2 and 3.0) so that you can keep your migration path as easy as possible.

If you’ve been outside of the web development space for a while then you may not have heard of Angular’s Tour of Heroes Tutorial. It’s a wonderfully written tutorial which is designed to take you from 0 knowledge about Angular to being a fully fledged Angular developer. Well, Rainer Stropek has taken that idea and applied it to learning Blazor. So if you’re familiar with Angular and it’s Tour of Heroes, you’ll be able to learn Blazor in no time at all.

And she has done it again with this wonderful series of blog posts. Talking new programmers through the techniques required for problem solving is hard enough, especially since problem solving for us devs is usually so tightly coupled with our languages of choice. But Ali has this amazing knack for boiling a topic right down to it’s most basic parts and explaining those before putting it all back together.

If you’re new to dev work, or want to level up your problem solving skills, I’d recommend reading this series and keeping it around so that you can come back to it from time to time.

Powershell has been cross platform for a while now

as with a lot of things that Microsoft create these days, it's on GitHub

which means that it’s totally possible to create powershell scripts for setting up your application environments using it, regardless of your OS of choice. With that in mind, it’s worth taking some time to familiarise yourself with some of Aaron Jensen’s tips for creating cross plat. Powershell scripts.

You just read issue #17 of The .Net Core Podcast Newsletter. You can also browse the full archives of this newsletter.