Another sneak peek for you!

I was aiming to launch today according to my nifty new MUJI weekly planner (more on that in a bit), but I also had: “Preview on Tinyletter?” So: I’m giving you a preview before it goes live tomorrow. And you can also be beta testers, bug reporters, and friendly folks who I’d be happy to get early feedback from (reply to me). There's a small thing I'm tweaking with the footer's hover state. Ignore for now! That one's filed.

As always, I’ve named it after a character in Robin Hood. Previous versions included:
Scathelocke is the alternate name for Will Scarlet, one of my favorite characters alongside Nasir. My canonical Robin Hood is Robin of Sherwood, the UK version that ran in the 80s during my first decade growing up in London.

Friar Tuck is probably up next.

That calendar thing: in an attempt to get better organized, I walked into a MUJI, picked up a $1.50 notebook-sized weekly calendar (that I can lay out flat and visualize next to my keyboard), and a pack of mini-highlighters. It's purely work/to-do. I still have meeting and event-centric calendars in Fantastical. 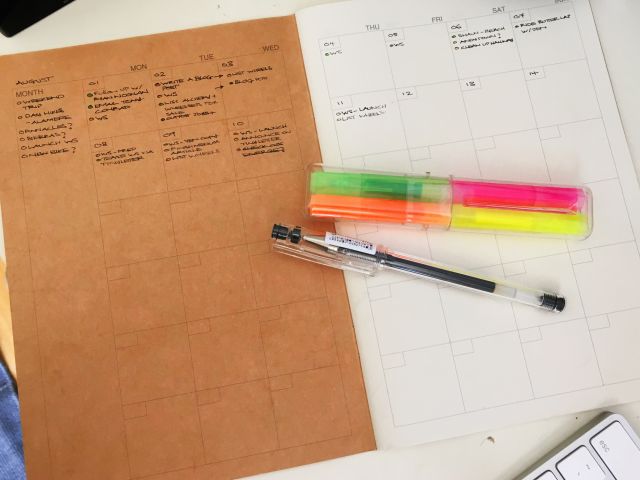 I denote an item by preceding it with an empty circle. The highlighters are a way for me to mark off what got completed (green) and what’s deferred (orange). I’m not sure what pink and yellow will do just yet. Yellow might denote priority at some point.

So far, into week 2, it’s helping. Being able to take it with me and work on it helps. I fill out the week as much as possible on Monday morning so I know what the plan is for the week. It promotes productivity. Or lets me know when I can go play hooky.

Last week, after finishing up the awesome Netflix original series, Stranger Things, I did two things:
Thanks, merci, terima kasih,

You just read issue #7 of Weightshifting. You can also browse the full archives of this newsletter.