I'm primal. It's a variant of the Paleo lifestyle, but isn't as strict or extreme. It practices an 80-20 rule. You're PRO for 80% of the time, giving yourself some slack the other 20%, if you need to. In our household, we're admittedly devoted 95–99% of the time. But the 80-20 rule allows for flexibility. It allows you to be human. It isn't a militant rule and one that dissuades, but rather encourages.

It's times during travel, vacation and different environments and culture that require some leeway.

Malaysia is tough in this regard. Much of the food is based around some kind of starch or carb, namely in the form of rice, noodles, some other doughy vehicle or generally sugary treat. Given the three main races — Malay, Chinese, Indian — the food can be absolutely fantastic, but it's also difficult for someone like me. But you allow yourself to function within the paradigm and hack things together that work.

The Eastern world is quickly catching up to the Western diet. Lots of American chains have expanded their deep reach into Asia and set up shop. Some have even found new life after becoming irrelevant on home turf.

Johnny Rockets in Kuala Lumpur is set in the alfresco dining alley that's part of the popular Pavilion shopping center. Now fading in the States, this new and novel Rockets outpost is packed to the gills. Malaysians are always experiencing the latest and greatest. There's a lot of catching up to do, and yet, there needn't be. In the quest for homogeny, I worry about the trampling of all that makes a place special. Alllooksame.

Malaysians spend a lot of time in shopping centers. It’s hot, hot, hot outside, so air conditioning is a luxury that many cannot afford in their own homes. Shopping malls are the local version of casinos — this is a Muslim country after all — and they don’t want you to leave. And why would you? The malls are huge and have everything you could want without ever leaving the building.

You’ll find an array of food concepts: from bootlegged and inspired versions of Western restaurants (among other things) to highly innovative takes on modern local cuisine to just plain ol’ original things that couldn't exist elsewhere.

But I'm afraid of the abundant gimmicks and trends. In the past nightclubs changed concepts every year, and now eateries are following suit: rebranding, switching it up and giving the fickle people what they want.

Despite this yearning for all things Western, the "local taste" speaks in volumes.

Three main players dominate the donut game. The first is Dunkin Donuts, who has been there a long time. Newcomers are the Indonesian J. Co Donuts (11 branches) and the local Big Apple Donuts (72 branches in Malaysia alone!). They're both a few years old now, and the donuts are somewhat recognizable but highly gimmicky with local twists on flavors. These folks are smart — they cater completely to the "local taste," as my mom says.

Krispy Kreme is lagging behind. They've been there for some time now, and while KK is a highly recognizable name, the original excitement waned. While Dunkin, J. Co and Big Apple have lots of outlets and franchises, KK only has two. Simple donuts don't cut it. J. Co and Big Apple provide a Baskin Robbins approach: a smorgasbord of flavors.

They boast flavors like California Almond (white chocolate topped with almonds), Avo-Choco-Dipped, Black Forest Glam and local flavors that combine heavy jams and dips with local fruits. The more, the merrier. Bang for the buck. They want crazy, and they want a nod to their culture. Smart move.

Here's a box of 12 donuts from J.Co that I bought for my family as a nice gift when they came over to spend time at the condo I was renting for the week: 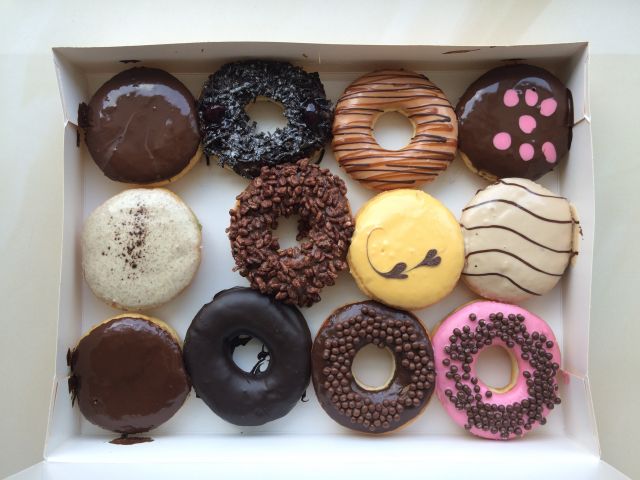 I don't condone this, but given my family's situation, it's a small piece of luxury for them.

Currently, the McDonalds is featuring the Samurai Burger, a burger that was introduced during my teenage years. It is a standard MickeyD’s hamburger with mayo, teriyaki sauce and some shredded lettuce. It's wildly popular and is similar to the McRib by making appearances every so often as a limited edition burger. Alongside the apple pie? The sweet potato/yam pie. Additionally, the pies are still deep fried. Something I didn't realize wasn't the case in America until I moved here 17 years ago.

Asia is catching up in many ways to the things that make the Western world, well, not so good. And all those things will make themselves prevalent in Asia as this happens: obesity, diabetes, sugar dependency, and other numerous diet-, lifestyle- and health-related issues. But at the same time, the trendsetters and the small percentage of people who give a damn are making their voices heard here in the Western world. And with the advent of the Internet, it’s making its way out to the Eastern world faster than I expected.

Thanks for reading,
Naz.

P.S. If you're a new subscriber, and are interested in back issues, send a reply via Tinyletter. I don't make them public, as I'd like this little group to be a direct way to communicate, and what happens here, stays here.

You just read issue #3 of Weightshifting. You can also browse the full archives of this newsletter.