In my last email I drew parallels between the “uncanny valley-ness” of video calls and prayer. I can’t say I’ve done the best job implementing my own learnings into my prayer time over the past couple of weeks, but everything is a work in progress.

At the end of that email I asked:

What have you learned about communication since sheltering in place?

Here are your responses:

One piece of advice I got was that over Zoom, nonverbal gestures are harder to read. This makes it hard for someone speaking to know how they are doing. It feels silly to overemphasize nods and laughs, but it’s helped me see where people are at and forced me to become a more active listener. Plus putting a sticky note over my face! In Zoom you can use the chat window to cover your face.

Before you read this email

One of the core values I adhere to when writing this newsletter is that I write what’s on my heart. Last time that meant a fairly light topic — video calls and prayer. This time around the subject on my heart is far more grave.

I put the name of Ahmaud Arbery in the subject line of this email so that you’d be prepared for what you’re about to read.

The Murder of Ahmaud Arbery

Despite two white men literally hunting down a black man and murdering him in broad daylight, it took three months, four prosecutors, a leaked video, and a hashtag that went viral just for a chance — a chance — that Ahmaud Arbery’s family would receive a fair investigation into his death.

Earlier this year, one of my friends (who is black) was working a package delivery job in a major Californian city. One evening as he was dropping off packages at a doorstep, a white stranger encroached on his space and accused him of stealing the very packages he was delivering.

Eventually the white stranger backed down — without apologizing — and my friend walked away from the encounter physically unharmed.

their stories began the exact same way: a white person acting on the deeply seeded belief that they have the right to police the existence of black people.

Thankfully the stranger who lied to my friend about being the police and falsely accusing him of robbery didn’t have a gun that night.

For all I know, that’s the only reason my friend’s story did not end the same way as Ahmaud Arbery’s.

I was recently introduced to a thought experiment from American philosopher John Rawls called “original position.” The concept was explained to me like this:

“Rawls argues a system is only just if you’d be willing to enter it without knowing what position you would have once inside.”

I didn’t choose to be white but I did choose to live in America, which means I have entered into a societal system that is built around preserving my comfort while requiring black people to justify their existence every day.

Given this reality, I believe my primary responsibility as a white American is to understand my whiteness. To recognize moments and patterns of the privilege I’m afforded, to actively seek non-white voices of influence, to create space for and amplify the voices of minorities around me.

But all of these actions are hollow if I don’t also acknowledge and grieve injustice.

We must acknowledge and grieve injustice because they are the first steps towards reconciliation. Without reconciliation, there is no hope for a better future.

Vergangenheitsbewältigung is a German term that

“refers to embarrassment about and often remorse for Germans’ complicity in the war crimes of the Wehrmacht, Holocaust, and related events of the early and mid-20th century, including World War II.”

There is no equivalent word in the English language for processing the centuries of trauma white America has inflicted on black people because America has never formally apologized for slavery.

As long as white America chooses to believe that Abraham Lincoln eradicated mainstream racism when he freed the slaves, and that the Confederate flag is a harmless symbol of cultural heritage, and that overt racism only comes from rednecks in the rural South, and that Obama’s presidency proves racial equality, and that Ahmaud’s death is merely unfortunate, our black brothers and sisters will continue to languish and die without accountability.

This is not God’s vision for how we should live.

God’s vision for community — as he designed it to be — is captured in the last book of the Bible. John, the author of the book, describes a vision he received of heaven:

“I looked, and there before me was a great multitude that no one could count, from every nation, tribe, people and language, standing before the throne.”

God creates people differently because he believes interwoven diversity is fundamental to the best possible expression of life and being.

And yet, the American church has historically been — and predominantly continues to be — segregated. In 1960, Martin Luther King Jr. said,

In the days leading up to May 8th — what would have been Ahmaud’s 26th birthday — Jason Vaughn (his high school football coach) ran 2.23 miles as a way to memorialize the date of his murder. Jason posted a video on social media with the hashtag #IRunWithMaud. At the time, no one had been detained or charged with Ahmaud’s murder.

Through gritted teeth and tears streaming down his face, Jason said

“I will not get tired until we get justice.”

The hashtag #IRunWithMaud began trending, with people posting videos and pictures of their own 2.23 mile run.

On May 7th — at the peak of #IRunWithMaud — two prominent, American faith communities posted on Instagram. 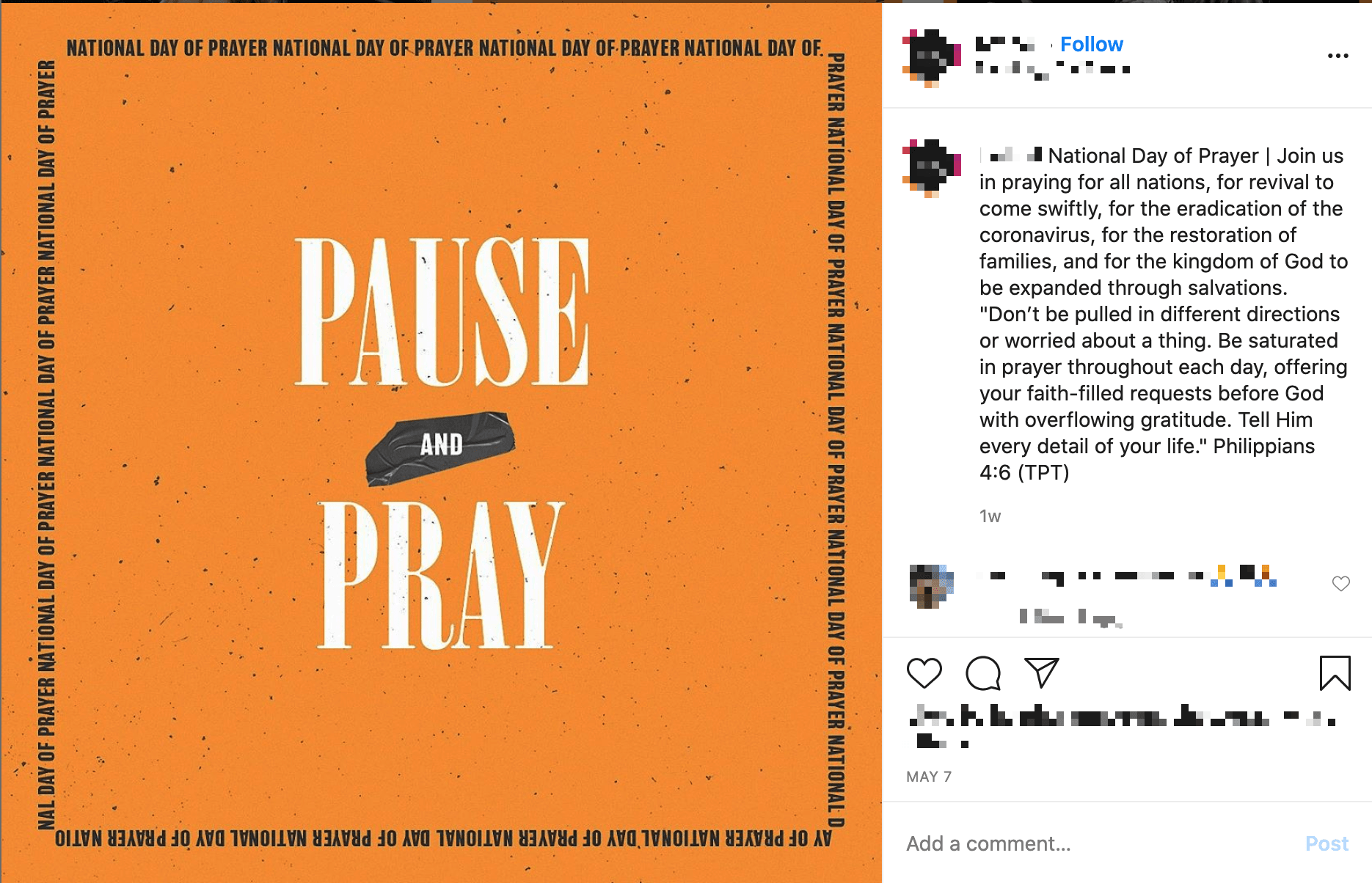 Despite May 7th being America’s “National Day of Prayer,” there isn’t even a single mention of Ahmaud Arbery.

The chasm between John’s vision of God’s heart for community and Martin Luther King Jr.’s description of the American church 60 years ago is still so wide in 2020 that even our social media feeds are segregated.

Thankfully, this is not the only representation of the church.

Kyle Haselden, a black author and preacher, built on MLK’s famous quote in a 1964 op-ed for the New York Times:

“The hope that the church will finally come to grips with the racial crisis lies in signs of sharpening awareness that the crisis threatens not only the nation’s domestic tranquillity and the Negroes’ welfare but even more imperils the soul of the church itself. The situation in this respect is similar to that of the church in Nazi Germany. It can survive as a church only by daring to challenge—at whatever danger to itself—the major evil of the day.”

Haselden explains that in order for the church to challenge evil, it requires

“Alert, committed and active young churchmen, lay and clergy, who in open rebellion against the low‐geared institutional churches detachment from the problem, are openly and sacrificially identifying themselves with oppressed and deprived Negroes.”

John’s vision of heaven isn’t a distant dream, it’s a reality we can experience here and now. But there’s a cost — reconciliation takes more than a hashtag.

Linger in the wounds.

How have you been impacted by Ahmaud Arbery’s death?

You just read issue #15 of The Valleyist. You can also browse the full archives of this newsletter.