Not a documented use of the machine

Not a documented use of the machine
Hey there,

This is the first of what will be a quarterly update from Tripping on Wires (and some related other stuff). I hope you’ll find it of interest but, if you no longer want these updates, feel free to unsubscribe (link in footer).

I’ve been on a bit of a social media hiatus and so things have seemed a bit quiet lately. I’m more interested in offering a bit more context, meaning, and depth as things go forward. I’ll also be keeping this to roughly once every 3 months (spring, summer, autumn, and winter).

For this edition, I’ll highlight some recent work, offer a discount, and share some upcoming things in the pipeline.

Earlier this year, I shared my Contingent Piezo Preamp. It’s a basic template/layout for a JFET-based preamp circuit. It’s also specifically intended to be open to randomness, improvisation, and play. It might not even work!!! (though there are some tried and tested recipes if you don’t fancy that risk).

The background to the project is a little convoluted but basically, I tried building all of the preamp circuits I could find online, realised that there was an underlying template that they all shared, and I messed around within this template to build a variety of preamplifier circuits. Of those preamps that worked, a couple worked well, and some others behaved quite unpredictably.

My interest in these unpredictable amplifier circuits was as part of a research project exploring circuits as lively dynamic systems, which play an active role in shaping improvised music performance. There’s a conference paper/video if you want to know more 📺

There’s also documentation of improvised feedback performances, with each of my contingent preamp circuits, all layered on top of each other, in a 30 min wild mess 💿

I knew throughout that I wanted to share this work in a manner, inspired by Peter Blasser’s paper circuits 📄, that you could print at home and make yourself. I also wanted to make a print edition of my own. Risograph printing was too expensive but I wanted the tactility afforded by slightly wonky registration, layering of inks, and cartridge paper. I’ve managed to simulate this with a multi-stage inkjet printing process that I’m super pleased with. 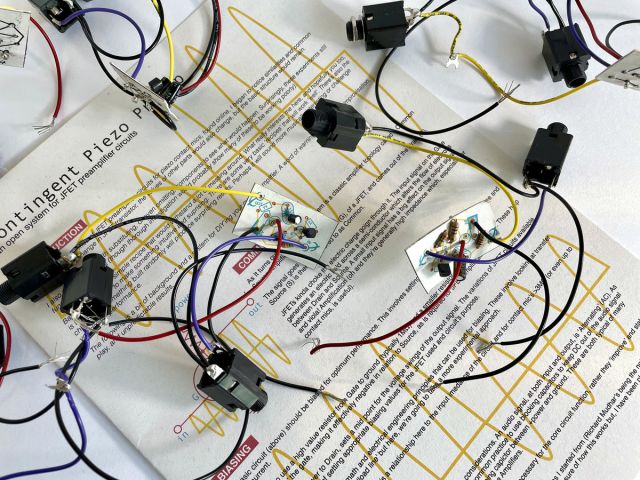 The print edition is available via bandcamp. It’s priced at only 50p (though please pay more if you are able) plus p&p. It also includes a pdf and audio download. You can also skip the paper version completely and download for free/pay-what-you-like.

I mentioned Peter Blasser’s paper circuits above. I started converting a number of the freely available paper circuit files into PCBs some time ago. At present this is completely unofficial but any spare circuit boards I have left over from my own projects pop up for sale, from time to time, on bandcamp.

I also preferred a slight variation on the process of making PCBs from the guidance I found online and have shared all of this work, so far.

This also led to some work and collaboration with getting Deerhorn PCBs made. For anyone familiar with the subject, there’s been very little success around making working Deerhorns. There’s some confusion around components and some of the circuits don’t seem to work. I’ve far from solved this but am happy to say I found some passible hacks that at least get a working instrument. I’m hoping to share more in the coming months.

First off, here’s 20% off of everything. Use the code smell_snub_stencil via bandcamp checkout (until 31st May 2022). 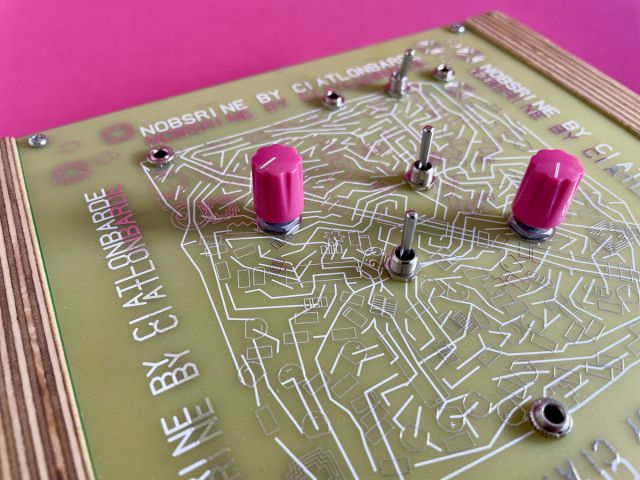 The Music Thing Modular Magnetophon modules are almost certainly the last ones I'll build as the only way to get the tape heads at a reasonable price is through bulk buying from China. 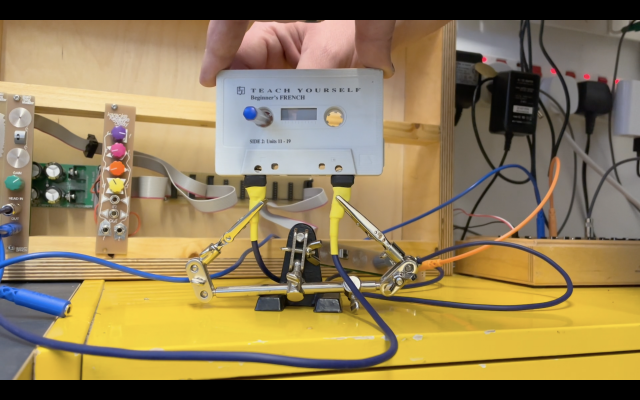 Personally I think these are all a lot of fun to play with and so I hope you do too.

There’s a lot in the works which I guess can feel a little overwhelming and like not much progress has been made so far this year.

I’ve recently received the (hopefully final) prototype PCB and Panel for a little 4-channel contact mic pre-amp and mixer 🎛. It’s based upon Nicholas Collins’ CD4049 preamp and I’ve pushed the gain for optimum feedback and squeals 💥 rather than cleanliness. Ideal for small noise setups and the likes. Building starts this month.

I was also fortunate enough to receive funding, through Sheffield’s Cultural Consortium 🙏 for some new equipment. I’m now the proud owner of a table saw 🪚 and a small CNC cutter 🤖. The table saw should help improve the quality of the wooden cases I am building. I’ve been getting good results so far and have recently built a cross-cut jig to make things even better.

The CNC cutter has a couple of purposes and has been a steep learning curve. First, I have simply been learning how to program/cut with it. I wanted to transfer my panel designs into something that would work with the CNC cutter and this has been easier said than done. I have, however, now figured out a workflow and have made some semi-successful cuts into acrylic.

I’m not a fan of acrylic though, or plastic in general, and so my next task will be exploring cutting designs into wood. Hopefully, this will be more sustainable and reduce the carbon footprint of getting panels made in, and shipped from, China.

The other process that also relies on Chinese supply chains, is manufacturing PCBs themselves. I’m not quite ready to try cutting these yet but I’m hopeful I will soon be able to start manufacturing my own PCBs.

Alongside this, I have been exploring small power amplifier circuits (based upon the LM386) for driving miniature speakers 🔊. I’m using these in combination with piezo preamps to make feedback paths through objects. This project has followed in a similar fashion to the contingent preamp in so much as I have been deep-diving into the various workings of these circuits and trying to coax opportunities for unpredictability and randomness. There’s a particular state, when building this circuit on breadboard or paper, that causes wild oscillations, yet stabilises on PCB. I’ve been trying to force the instability to reappear on PCB and find ways to switch it on/off or interact with it in other ways. This has also led to some mashing up with Derek Holzer’s soundbox circuits. I’ve got two new prototypes that have just arrived and I’ll be looking to build and test over the coming weeks.

Paper Circuit 📄🎛 work also continues. I made PCBs and built both the Esoterica Spikering and Esoterica Chainlock last year. They’re great circuits but they’re not self-contained and need something to trigger them. The natural choice would be the Rollz-5. I have previously found these easy to build but difficult to fathom when it comes to performing with it. For those who haven’t explored these themselves, each stage of the Rollz-5 (various Rollz, Ultrasound Filters, Gongs, and AV Dog circuits) has multiple points where you can choose your own component values and tune the instrument yourself. I have been painstakingly mapping each of these points, to understand the range of workable values and find some recipes I particularly like. I’ve figured most of this out and have also instigated positive pulse outputs along with LEDs so you can visualise some of the rhythmic elements. I just want to work out a mixer circuit I like. So, hopefully come summer 😎, look out for some Spikering, Chainlock, and Rollz-5 for sale.

You just read issue #1 of Not a documented use of the machine. You can also browse the full archives of this newsletter.