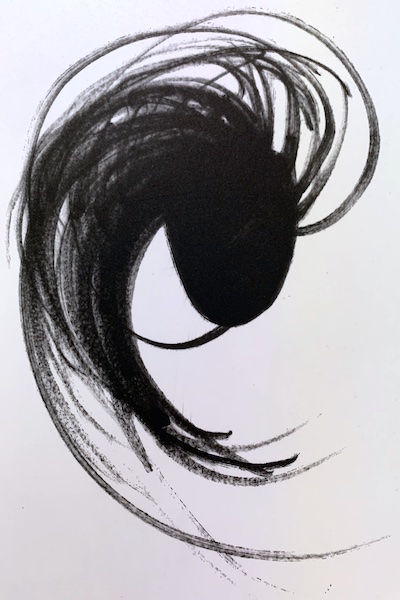 (Drawing of Sedna, the goddess of the sea. From the exhibition The Arctic – while the ice is melting, Nordic Museum Stockholm. My own photo.)

The myth of Sedna, goddess of the sea, appears in many places and many versions in the Arctic. One version has her being left alone on an island after coupling with a stranger, and bearing his child.

Eventually her father, the hunter, comes to pick up his daughter. On the way home, a terrible storm blows up and the boat is in danger of capsizing. To lighten the load, she is thrown overboard. She holds onto the boat, but the hunter chops off her fingers. Sedna sinks to the bottom, where she is transformed into the goddess of the sea. Her fingers turn into sea creatures. From that time onwards, people had to pray to Sedna for a successful hunt.

If the hunt failed, Sedna was angry and let the sea creatures hide in her hair. Hunger and death might result from Sedna’s anger.

Many Arctic myths teach that one must show gratitude for the resources one needs to take from nature.

Text from the exhibition “The Arctic – while the ice is melting” in the Nordic Museum in Stockholm.

What are myths for? I’m not an expert on the topic of mythology, yet whenever I come across myths, they contain some sort of advice on how to behave when meeting a specific situation. Yet they are not recipes but a sort of abstraction that allows for the actual encounter to be adapted to the complexity of context. Maybe they are more like a rule of thumb.

What struck me today, when I read about Arctic myths, is that myths have something relational. I’m not sure if that is always true, but for the few examples that were given at the museum and the myths I recall that is certainly the case. In the example of Sedna, the myth is about the relationship between the hunters and the sea creatures. It advises that when the humans interact with the sea and extract food for themselves, they need to be grateful as it is given to them by the grace of nature (embodied in Sedna in this case). This advice is an indirect warning that not more should be taken than is really needed. So in a way, the myth reminds people that they are part of the bigger whole of nature and also that they are not the most powerful force in nature – that seems to be the role of the gods (and that this is true is currently experienced by many people on the planed who are facing the force of floods, heat and fire). At the same time, myths take an important role in explaining natural phenomena that are not explainable based on the knowledge of the time.

As we have moved into the age of science, the scientific mind asks the question: what is behind the myth? The scientific mind does not allow for the inexplicable. We use science to explain phenomena and eventually uncover that there is no goddess of the sea and that bad hunts are not because of her being angry, but because of other, perfectly explainable reasons. Scientific studies then also provide insight in how to maximise catch, using technologies like better and bigger nets and sonar to locate large schools of fish. Hence, science makes the things that were inexplicable and thus unseen by the people explainable and visible. At the same time, we take away the message that we are part of nature and that we are not the most powerful force in nature. Instead, we replace it with the message that we are apart from nature and that we can understand and thus control it. And we can extract as much from nature as we want, not only as much as we need.

I don’t think there is anything wrong with scientific enquiry per se. I believe in the scientific method of enquiry and I also believe that we need to apply a sort of scientific rigour when we look at phenomena around (and in) us. But science as we have practice it in the last few centuries has contributed with its reductionist and fractioning approach to the perception of the separation of humans and nature. This is one of the major underlying factors that have led to the multiple complex crises we find ourselves in these days.

Why is that? Is it because we don’t believe that there isn’t anything that we won’t eventually be able to explain and thus control? Was the role of myth not only to somehow explain the inexplicable, but not explain it in a way so we feel we can control it but in a way that also warns us that there are greater forces at play than us and that we thus need to tread carefully? What myths or other vehicle could we use today to mend this fractioning of humans and nature? Would it make sense to keep some things unexplained, un-uncovered? Or, rather, accept that there will always be things that we won’t be able to explain with a reductionist approach that negates the role of context?

I don’t know an answer to these questions. I really don’t want to advocate to stop scientific enquiry and leave things unexplained. At the same time, it seems that the magic that comes from the inexplicable, like a goddess of the sea, gives us a means to live in more sustainable ways.

What do you think? Can you help me out? Just reply to this email if you have any thoughts on this.

Oh, there was one section of the exhibition on various myths of the beginning and end of the world. Here just a little taste of the latter:

The sea, storm-driven, seeks heaven itself,

O’er the earth it flows, the air grows sterile;

For the gods are doomed, and the end is death.

From the Poetic Edda, which was recorded during the Middle Ages.

Can you hear it whispering

at the back of everything?

It is thirsty, your body.

for the lacustrine dark,

for the cool respite

Feel the cool liquid slide into your belly,

slip into your legs and to your feet.

Let the weight of it root you to the solid ground

and plant your self there, where it stands.

Resist the urge to overthink it;

the emotional museum of water.

Bring it into your body,

and lay it to the earth.

Thanks for allowing me to publish this here!

You just read issue #15 of Gaining Systemic Insight. You can also browse the full archives of this newsletter.