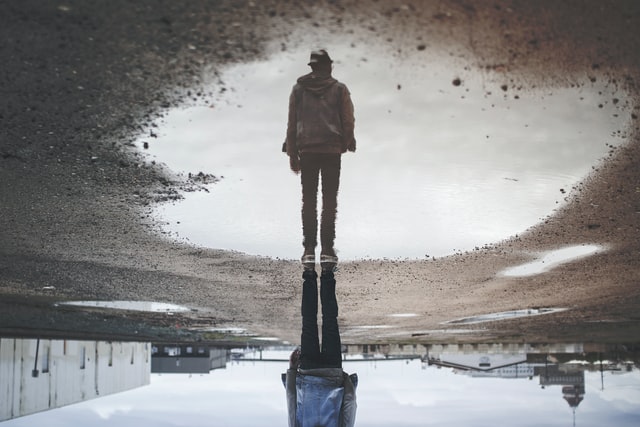 What does it mean to be right? And what right does it give us over others if we think we are right? Is there a right? I have just been mulling over these questions for a bit. I grew up and was socialised in a system that values objectivity and scientific explanations of things. Indeed, I studied environmental sciences at one of the top natural science universities on the planet. So when science established something as ‘true’ I generally tend to believe that it is true.

In his book ‘The Matter with Things‘ (McGilchrist 2021), Iain McGilchrist asks: What is truth? Being McGilchrist, he thereby differentiates truth as seen by the left hemisphere and by the right hemisphere of the brain:

So, how would the right hemisphere conceive truth? Rather than conceiving it as a thing, it would experience it as a process, one that, in this case – not just for now, but in principle – has no ending. More importantly, it would see that truth is a relationship. Instead of seeing a subjective realm and an objective realm which should as near as possible mirror one another, it would see a constant reverberation between two (never completely distinct) elements within our consciousness – thoughts and experiences – whereby they “answered’, or co-responded to, one another; this ever better accord, or attunement, would be the evolving truth. It would be intrinsically incomplete, but constantly in the process of completing itself; and uncertain, though constantly approaching nearer to certainty; incapable of being grasped except through embodied being, through a consciousness that is in the flesh and engaged in the world. We would find out what was true only by testing it on the pulse of experience – whether it corresponded with the totality of our experience, not just with one (cognitive) part of it. Because of this it would be unique and necessarily many-stranded.

I find these ways of conceiving truth interesting and they made me think about my own conception of truth. A couple of things come to mind that I would regard as true. For example that climate change is a serious problem for humanity, that it is human-made and that we can do something about it by reducing carbon dioxide emissions. Or that vaccines are an effective means to curb the COVID-19 pandemic and that if most people get vaccinated there would be fewer cases of serious illness or death.

Of course in a way these are probably naive questions to ask as they have certainly been discussed over and over again by various social scientists and philosophers – and should it not be the aim of a democracy to reconcile between different opinions about how we should do things in a society?

What I am experiencing is that we more and more keep forgetting that different people can perceive reality in very different ways. I feel that we – at least in my own cultural realm – tend to believe more strongly in the left hemisphere’s way of thinking about truth: once I have found it (the thing), for example through scientific inquiry, I can stick to it and it should be the same for everybody. Once that is the case we start to convince and even coerce others. Like missionaries – yet thinking about missionaries, this is not a new phenomenon I’m describing here.

What I like to believe is that it would be worthwhile asking, how does my experience of truth rub against your experience of truth and how can this rubbing generate another, more interesting representation of the objective reality – something we would completely miss if we insisted on our own version of truth. But that would require that we meet each other in wonder and openness, rather than with pre-frabricated opinions, and value the other person’s opinion and way of seeing the world as equally valid to ours.

What do you think about this? Pleas share your thoughts by simply replying to this email.

Reference: McGilchrist, Iain. 2021.The Matter with Things: Our Brains, Our Delusions, and the Unmaking of the World. Perspectiva Press.

Now what? People need people and people have no idea how to live with people. The ways in which community was generated in the past have slipped away. The farm, religious ceremonies, moving water, taking care of animals, making music, raising children, tending the elderly … these things have changed shape. In some cases the break with traditions of family and religion released younger generations from oppressive cultural expectations so they could pursue a different life than their parents, allowing for different expressions of sexuality, exploring new ideas of life, and so on. But in the midst of finding ourselves, we lost each other. Now in this time of tumultuous, rapid change there is a need for another sort of collaboration, one in which improvisation is the basis. No one knows what chaos is coming next, or when or how to respond. The pandemic was evidence enough that governmental bodies and media were not suited to addressing localized unique situations. To get through these times a morale that underpins communal relationships must be nourished. This morale is a willingness to be flexible together, to be creative together, to ‘find a way’ where there is need. People need to find a way — to find a way.

Why have I added this to my paper museum? There are two parts to this. On the one hand, the unpredictability of complex systems that can often turn seeming improvements into new challenges (like the liberation of one generation from oppressive structures leading to an overly individualised society). It is a good example that there is no end to exploration – no change will make things good and then we can just relax. Change and learning need to be continuous. On the other hand the need of collaboration and community Nora identifies when looking at the crises that tumultuous times we are in: we need to be flexible together, creative together, find a way together. Coincidentally, it really fits well to the piece about being right above.

Photo by Randy Jacob on Unsplash

You just read issue #47 of Gaining Systemic Insight. You can also browse the full archives of this newsletter.