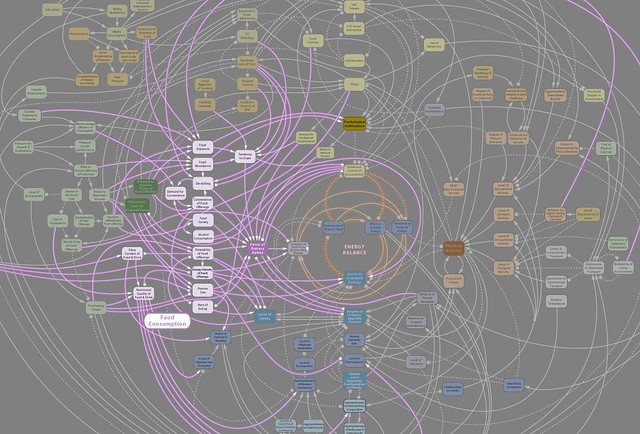 Dave Snowden likes to characterise complex adaptive systems as having a disposition to behave in a certain way, rather than being an aggregate of individual and reducible cause and effect relationships. In her 1999 book Dynamics in Action, Alicia Juarrero describes the behaviour of complex systems as multiple interdependent layers of constraints contextually shaping the agents’ behaviour. The constraints are thereby themselves contextually emerging from the dynamic of the relationships between the agents in the system, modifying the system’s prior probabilities in real time.

Gregory Bateson, building on work by Ross Ashby, draws a similar picture of dynamics in complex systems when he talks about a living system being a set of interlinked variables. Bateson thereby stresses the need for flexibility in the variables of living systems in order to preserve adaptability of the whole system to new circumstances. For example, our body needs the flexibility to regulate breathing frequency and heart rate to adapt to strenuous activity or lower oxygen environments and ensure that carbon dioxide is transported out of the body at sufficient rates, and at the same time oxygen transported to the cells. Hence, the faster-changing variables of breathing frequency and heart rate make sure that other deeper variables like the level of carbon dioxide in the blood or, indeed, our ability to be alive, can remain at acceptable levels of stability. So the higher level functioning of the body is not causing the faster variables like breathing to change but it constrains their variability. Rather than being controlled a linear causal relationships between these variables, complex systems’ behaviours are guided by the interdependence between all variables and their flexibility – or lack thereof in the case of pathology.

Making the shift from understanding complex systems as having lots of linear causal pathways that somehow add up (as shown in the diagram above), to being dispositional in nature (which is difficult to show in a map), is not an easy one. It took me many years. At least in our Western cultures, linear causality is so deeply engrained in our way of thinking and, indeed, our way of being, that many people struggle to let go of this idea of causality – myself included.

This attachment to causality is related to our attachment to abstraction and categorisation. Drawing causal connection – abstracting them from the systems themselves in order to describe them – allows us to build maps of processes so we (think we) can predict systems and control them. While control seems possible when looking at the map, it fails once we engage with the territory – reality. Yet we too often confuse the map and the territory. That’s why we cannot let go of the maps – and the notion of causality.

An extract of the Embodiment Manifesto by Philip Shepherd.

When your thinking cuts itself off from the body, it is cutting itself from your living reality. The body holds the deepest currents of your being, and those currents are informed by and participant in the life of the world around you – the being of the world. The vast, subtle intelligence of the body is akin to and attuned to the vast, subtle intelligence of nature, from which it was born. By distancing the center of your thinking from all that, you commit yourself to a kind of alienation that makes you feel like a spectator on the events that surround you. Furthermore, you start managing from on high what you cannot experience, because head-centric thinking is keen to create structures of control, systemization, judgment and acquisition. But being out of touch and off balance yourself, you can only seed more imbalance with every willful, managerial impulse – even when your impulses spring from an agenda that seeks to improve things. The desire to behave ethically, if coming from a place of disconnected reason, will necessarily focus on amending how your behavior affects the material world; and because disconnected reason tacitly expresses a contempt for the body, it will overlook the problem of how your relationship with the body affects your behavior.

This is our blind spot – and it is a towering liability, because our relationship with the world can only mirror and express the relationship we have with our own bodies. How you relate to your be- ing sets the template for how you relate to being itself. Having estranged ourselves from the body and its wisdom, we find ourselves also estranged from the world and its wisdom.

The body is not a mechanical attachment that the head is given for moving itself around and implementing its will. The body teems with intelligence. In fact, it processes over a billion times more information than we can be consciously aware of. The body knows by feeling. The brain in the head cannot feel – it seeks rather to know. And its brilliant intelligence is capable of understanding everything, with one exception: it cannot understand life. The intimately interconnected process- es of this living earth are beyond intellectual knowing. Undaunted, the brain objectifies what is around it – and does so without any appreciation for what it sacrifices with that act. It shatters the world into mere bits that can be known in isolation, one by one, and remains incapable of noticing the wholeness that sustains and speaks through each of them.

What the body most deeply feels, by contrast, is the living pulse of the present. And what it most deeply understands is that it belongs to the world. When you allow your body’s intelligence to be fully present to a tree, for instance, it experiences kinship within that living magnificence before it. And so it is, too, with a snail, a wave on the beach, a hawk drifting across the sky. The body knows it belongs to all of them, as the dissociated head never will. It is for that reason that Aboriginal Australians refer to the thinking of the head as a “tangled fishing net”; and that the Okanagan word for insane translates as “talking, talking inside the head.” By that standard we are all insane.

We cannot join the world’s harmony if we continue to lock ourselves in our heads – and as we see all around us, the world cannot endure the harms inflicted on it by a way of being that cherishes the fantasy of disconnection. What is asked of us, then, is a revolution as radical as the one that brought to light the true center of the solar system. We need a revolution that will challenge the rule of the head and bring us home to the hub of our being – a hub that lies deep in the pelvic bowl, and is associated with the female aspect of our consciousness. We need a revolution that is at once deeply personal, and as boldly political in its implications as were the insights of Copernicus. And just as Copernicus helped to disclose the harmony of the heavenly bodies, the emerging revolution will disclose the true harmony of our life on this heavenly body we call the earth.

Why have I added this to my Paper Museum? I have been enjoying Philip Shepherd’s work and as shared earlier I have participated in one of his workshops. For me, his practices of embodiment add another dimension to my exploration of how to be and act meaningfully in the fullness of life’s complexity. The Embodiment Manifesto is a short and accessible piece that shares the core of Philip’s thinking. It also links to and informs the thinking on causality, map and territory I’m sharing in this and the next few emails.

You just read issue #33 of Gaining Systemic Insight. You can also browse the full archives of this newsletter.