The Snoot Letter #8 – Halloween and THE GUEST

I delayed this issue a couple days, because Halloween was on the horizon, and I wanted to write a longer post about The Guest.

This year seems to be the year that a critical mass of people are embracing that our movie The Guest is a Halloween movie. I’ve seen lots of twitter threads and blog posts about the movie, and I’m delighted to see that the film seems to be getting a second life. I hope this continues, and The Guest is eventually considered a Halloween classic.

When we made The Guest, we knew it was a good movie. We’d screen for audiences, and people loved it. We premiered it at Sundance, and the reaction was fantastic. But no bidding war emerged. The bigger distributors all showed no interest, and the smaller distributors were only interested at a tiny valuation of the movie.

We were in a weird place. We made a movie that we knew a lot of people would love, but there was almost no meaningful support for it from distributors. This was just before the boom of streaming platforms buying movies and relabeling them as “originals,” and we were stuck in this situation of having to choose between a few bad offers from distributors that weren’t going to do much with the movie.

We chose a different path.

Bob Berney and Jeanne Berney had just started a new distribution company, having recently bought back the name of their previous company Picturehouse, but they didn’t have the money to release movies yet. Luckily for us, Bob and Jeanne saw the movie at Sundance and loved it. We worked out a deal with Picturehouse where they would release the movie, and Snoot would cover the distribution costs. We doubled down, betting on ourselves. We knew we had a great movie that people loved, and figured that it was a good bet to make.

We put together $3,000,000 for the distribution of the film. There was a big promotional/screening tour, with incredible support from Adam Wingard, Simon Barrett, and Dan Stevens. But when the film hit theaters, audiences didn’t show up in droves. Whatever the opposite of droves is, that’s what showed up. We just didn’t cut through the noise. In retrospect, I think the marketing wasn’t as bold as it should have been. And the scale of our release was either too big or too small, depending on how you look at it. We grossed a minuscule $332,000 in the US, and it looked like we were going to not only lose the money we spent making the movie, but also almost all of the money spent to release the movie!

Once the theatrical life of the movie was over, The Guest hit the next windows of its release cycle. Back in 2014, this meant digital rentals, digital sales, and packaged goods (DVDs and Blu-rays). Picturehouse releases would go through Universal for home entertainment, and the great news is that Universal figured out how to find our audience. Even though Blu-ray and DVD sales were plummeting overall in the marketplace, we were a hit on home entertainment. The film has generated enough revenue from “US Home Entertainment - Videogram and Digital” to almost recoup the full $3m we spent on the release of the film. We still weren’t making enough money to recoup the budget of making the movie, but at least the release costs were almost covered.

The next window was SVOD (subscription video on demand). The term used in the industry to describe when a movie hits Netflix or Hulu or HBO. This is where you make the big money, right? If we’re a hit on Blu-rays and DVDs in 2014, then surely that will translate to a huge licensing fee from a SVOD platform. Easily in the millions. Maybe this movie can finally recoup its production costs!

Except that’s not how things always work. Picturehouse had what’s called an output deal with Netflix. Any of the movies they distribute automatically go to Netflix for the SVOD window, and the license fee Netflix pays is a percentage of the theatrical box-office the movie earned. As you remember, The Guest grossed only $332,000 in US theaters. So the license fee we received from Netflix was under $50,000.

The movie went on to be a huge success on Netflix. And of course, our other home-entertainment numbers dropped significantly because the movie was now “free” to watch on Netflix. As everyone knows, Netflix doesn’t release viewing numbers, but I think it’s pretty clear that the majority of people who saw the movie ended up seeing it on Netflix. Netflix fell over themselves to finance Death Note, another movie by The Guest director Adam Wingard as one of their first big budget productions. We were finally a big hit, but on a platform where none of that success resulted in money being returned to cover the cost of making the movie.

So I’m glad that The Guest is hopefully turning into the Halloween classic that I always hoped it would be. Of all the films we’ve helped make, this is one of the ones that I hold closest to my heart. I loved the experience of making the movie, and I love the movie itself. But it’s still a movie that has lost millions of dollars. We found our audience late, and we found them on a platform that was able to pay pennies on the dollar for the movie.

Years after The Guest came out, I started to notice a strange pattern. I’d have meetings with executives at big movie studios and streaming platforms, and when I’d ask what kind of movies they were looking for, they’d say “we’d love to make a movie like The Guest.” Or I’d hear things like “if we had released The Guest, it would have been a huge hit.” At first, I didn’t know how to handle this. They could have had The Guest! The movie had a giant “for sale” sign on it at Sundance, and none of these studios or streaming platforms came knocking on our door.

Now, I just thank people for liking the movie. I hope its popularity continues to grow. Maybe it will become a movie that people watch every year at Halloween. I’ll do what I can to encourage that, and each year we can chip away at the unrecouped budget until hopefully this creative success story can also turn into a financial success story.

I was going to include a bunch of links to buy or rent The Guest on iTunes and Amazon, but inexplicably the movie is currently not available on those platforms.

I love movies and I hate the film business.

Happy Halloween, and don’t eat the apples filled with razorblades. 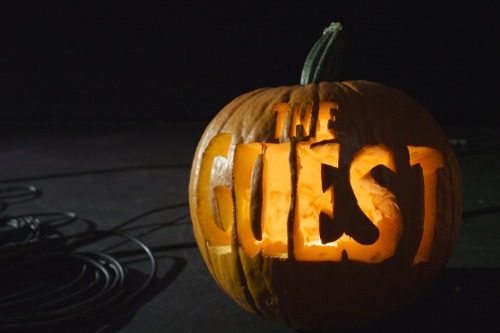 You just read issue #9 of The Snoot Letter. You can also browse the full archives of this newsletter.