Many games accept death as a consequence for the main actions of gameplay, but fewer consider what those deaths mean, culturally, religiously or even environmentally. As a game asset, bodies often politely transmute into piles of loot - or simply stay rag dolled where they fell. When they are acknowledged (usually for named characters rather than combat fodder), there might be a question of burning or burying, but rarely of preservation, or of ritual. We don’t tend to see bodies treated in any way, or funeral traditions beyond mournful eulogies.

This general inattention to other forms of culture and spirituality around death in many games can make them feel distinctly culturally Christian, even when the setting could suggest otherwise. This isn’t to say this approach is without culture or religiosity, but that it reflects a specific one, which limits the world a game is set in when done by default. 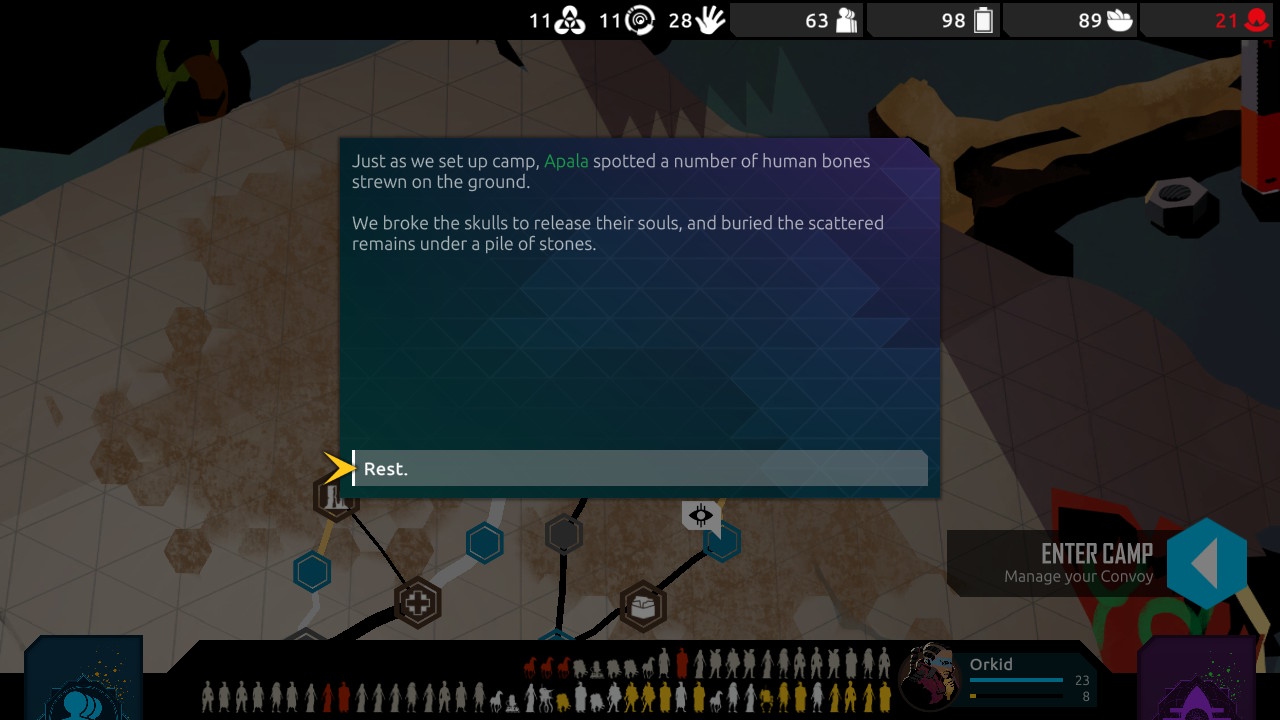 With this context, this tiny encounter in Nowhere Prophet stuck with me:

Just as we set up camp, Apala spotted a number of human bones strewn on the ground. We broke the skulls to release their souls, and buried the scattered remains under a pile of stones.

This is a random event in the card game, but it tells me so much about the culture of this world. Both in that they have a belief that souls can be trapped within intact skulls, and that they feel morally obliged to help someone in their death even at the point of being “a number of human bones”. It’s a level of empathy for the dead distinct from many games using skeletons as set dressing, where neither characters nor players are expected to recognise them as people.

Death is omnipresent in many kinds of games, but Nowhere Prophet demonstrates that it only takes the smallest details to thoughtfully consider death as a part of culture, and not a monolith.

I’m going to recommend a game explicitly about death: A Mortician’s Tale. You can buy it on itch.io, or if you bought the Humble Bundle for Racial Justice and Equality last year, you already own it. It is not, in contrast to what I’ve just written, a spiritual take, but instead an honest and heartfelt exploration of how people and bodies are taken care of after death within the US funeral system.

Ruth Cassidy is a writer and self-described velcro cyborg who, when not writing about video games, is probably being emotional about musicals, mountains, or cats. Has had some bylines, in some places.

You just read issue #20 of Saturshot. You can also browse the full archives of this newsletter.