rockyourcode: Notes on ”Advice for Your First Dev Role”, Notes on “How to Become a Better Developer With Nacho Iacovino“, Notes on “Enterprise Architecture Patterns“, Notes on “Ramping Up at Your First Developer Job”, Receive Webhooks via ifttt, TIL: GitHub Actions on cron Job Might Be Late, My Git Aliases And Abbreviations

Here are the articles from last week:

Notes on ”Advice for Your First Dev Role”

Virtual Coffee is a remote community for developers that aim to support each other.
They offer “brown bags” which are talks and discussions about a specific topic.

Here are my notes from Advice for your first dev role by Bryan Healey:

Remember that there will be a ramp-up period. You should take the time to talk to other engineers in your team.
Learn about the tooling stack as soon as possible.
Talk to your manager regularly.

Keep in mind what you want to achieve in a year, 5 years, etc. Be proactive. Don’t wait for tasks to come to you — gradually ask for more complex tasks. Take ownership.

Many juniors try to jump in and contribute at scale. That hinders them from seeking help, and opening a dialog. Having a “set of fresh eyes” is valuable for a company.

Bryan looks for continuous contributions on an escalating scale. He doesn’t expect a junior to contribute major features right away.

Good engineers should be comfortable with asking questions as its part of the process.
A functional team will collaborate and discuss, so your questions should be welcomed, too.

When should you ask questions? As a beginner, don’t spend too much time on trouble-shooting. Nobody gains much when you try to solve a problem yourself that could be solved faster by asking for help.
Rule of thumb: don’t spend more than 30 minutes banging your head against the wall.

When you start a new job, there is a “grace period” where everyone expects you to ask questions. Build trust by doing your due diligence (take notes, learn, listen for feedback, etc.).

Also remember that seniors developers can learn from you.

Bryan hires junior developers for their personality, creativity, problem-solving, not for their technical skills. He looks for people that can push the team. He doesn’t care about failure, not delivering things.
Don’t be quiet, be part of the team.

Notes on “How to Become a Better Developer With Nacho Iacovino“

Notes from the Twitch stream with Francesco Ciulla and Nacho Iacovino (1 hour 17 mins): 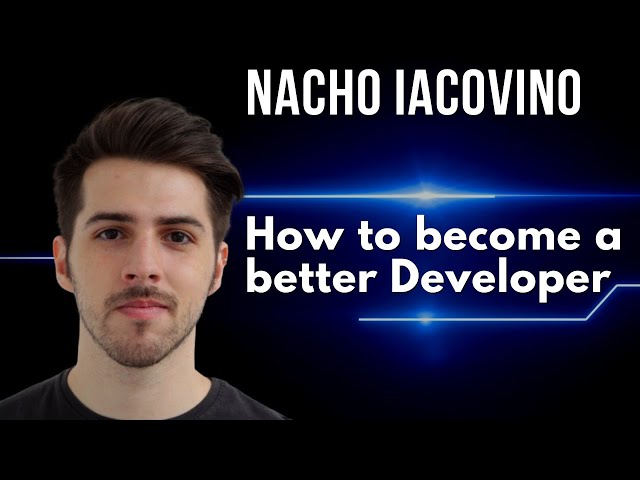 Nacho Iacovino is a self-taught developer from Spain who grew his Twitter account in a short time.

Here are some tips that he shared.

Coding interviews: He learned from each interview. Even if you can’t answer a question, you can go home, research, and then you can answer the question on the next interview. It’s a process.
You also need to interview the company.

Marketing/Followers: Nacho made some useful Twitter threads and pinged the influential Twitter accounts for feedback (no spam, no selling, add value), hit a niche (Tailwind CSS).
Engage with bigger account. Add value to other people’s tweets. Use common sense.
Choose one platform and be consistent.

Becoming a better developer: He quit JavaScript twice before he managed to become a developer full-time. Be consistent. You might not have 6 hours a day to learn to code, but at least do a little bit every day.
Find the best way that works for you (video, tutorials, books).
Don’t copy a tutorial verbatim, try to experiment, embrace breaking the application and find out how to fix it. Challenge yourself.

Portfolio: Show what you’re capable of. Udemy project clones are dimes and dozens, make it your own. Make it easy for others to contact you.
Show the newest work first. Be concise. Say where you’re based, so it’s easy to see if the company can hire you.

Learn in Public: Nacho shared what he learned publicly on Twitter. People were reaching out to him, because they knew what he learned.
Be your own teacher. What you write down you can use later.

The goal of the workshop is to learn the mental models and patterns to reduce complexity in software development.

The principles from the course are framework-agnostic, but the teacher uses examples from Angular.

What are “enterprise patterns”?

The core problem across all enterprise software is complexity. We strive to solve complexity by diligently applying first principles.

If you run into a problem, it’s tempting to blame it on the framework. More often than not, the problem stems from a problematic implementation. Simplify the architecture to solve the root cause.

Out of the Tar Pit by Ben Moseley and Peter Marks 1:

We believe that the major contributor to this complexity in many systems is the handling of state and the burden that this adds when trying to analyse and reason about the system. Other closely related contributors are code volume, and explicit concern with the flow of control through the system.

Look at the code:

It is impossible to write good tests for bad code.

The friction to testing is high because you must write testable code.

The Axis of Evil:

Take the time to properly model the domain.

Use (TypeScript) interfaces to communicate your intent.

State is a data structure.

Identify the things that are conventionally equivalent, and optimize/automate them.

Find the things that are not conventionally equivalent (UI, business logic), and focus 95% of your time on that.

Use the flux pattern.

The Fifth Element of Programming

Notes on “Ramping Up at Your First Developer Job”

The talk WebOfficeHours - Ramping Up at Your First Developer Job by Mark Noonan is a 1-hour video with useful info for junior developers.

Here are my condensed notes:

First Week on the Job

Be a Little Cynical

Asking for Help Is a Superpower

Managing Frustration Is Your Job

Make a Lot of Notes

Don’t Be Too Shy in Meetings

Carving Out “Your Job”

You Can Do Anything if You Have Enough Time

ifttt is a no-code/low-code tool for automation.

You can chain trigger events (“if someone tweets a new tweet with the hash-tag coding”) to commands (“then send me an email”).

My goal was to receive a webhook event, so that I can send an email.

I create my newsletter via buttondown.email. I have a script that creates a new newsletter draft from my blog posts via GitHub actions.

When a new draft drops, I want to receive a notification. Buttondown has a webhooks API that can send POST requests to an endpoint — for example, to ifttt.

You have to create a new ifttt “recipe” with the webhooks trigger.

In your ifttt webhooks settings, you will see an URL that looks like this:

I need to tell buttondown.email to send a webhooks request to that URL.

But the correct URL is different than the one shown in the ifttt UI.

I could not find that information on the official website, but some third-party blog posts (see below) pointed me in the right direction.

TIL: GitHub Actions on cron Job Might Be Late

Today I learned that scheduled GitHub Actions might be late or not run at all. 😠

I’ve written a script which fetches my blog posts every week on Monday and creates a draft with my newsletter provider.

The script uses a cron job.

I assumed that the cron job will run at the specified time.

Unfortunately, that’s not the case as per this post in the GitHub support forums:

A possible work-around is using a third-party service like IFTTT to trigger the GitHub Action Workflow.

My Git Aliases And Abbreviations

As a developer, Git is one of the essential tools in my daily work.

Today I want to share my git aliases and fish abbreviations that make working with Git more comfortable.

In my ~/.gitconfig file:

The first few are from Emoji-Log, a method to decorate git commits with emojis. What I like about the method is that it uses a small subset of defined emojis and make the commits look prettier.

I also have utility commands, like git st which gives me a condensed version of git status.

The logline commands are useful to show a graph of the commits.

I also have fish abbreviations that make it easier for me to type common git commands.

One of my favorite ones is gapn which expands to git add --intent-to-add . && git add --patch.

This command shows you all your changes from the last commit with the option to stage hunks.

I’ll leave a list of my fish abbreviations here:

Abbreviations like gcm are handy: The abbreviation expands to git commit -m, so that I now can type my commit message.

You just read issue #15 of rockyourcode. You can also browse the full archives of this newsletter.