The Plans To Shop-ify Your Brand

This week we saw one of the major players in the eCommerce landscape make a big move - a move Shopify’s Chief Product Officer called it’s “most significant products ever”:

Hours away from launching one of Shopify’s most significant products ever. Any guesses?

Shopify have launched a new app called ‘Shop’ – and with it potentially an entire new business – that they intend to compete directly with Amazon.

The app is a new brand, and completely new business model for Shopify. From early signs, the company appears to believe this new business could be bigger than ‘Shopify’ itself, and may be the next stage in a total rebrand of the company from ‘Shopify’ to simply ‘Shop’.

For years, every Shopify vendor has had their own store, with its own presence, accessed via the web or via their own app. Today Shopify have changed that – building their own app that allows you to buy directly from their ecosystem of brands & retailers all in one place.

Summary: - Shopify have just launched an ecommerce marketplace - They’ve pushed it out as an upgrade so it’s on 16 million phones already - It appears to be aimed at competing directly with Amazon - It’s part of a completely new brand called ‘Shop’

One issue with Amazon’s efficiency and scale is that it leaves little room for brand. It’s wonderful for commodity products, but if you have specific value props to tout beyond a low price, it is a very difficult place to communicate those to your customer. And with commerce moving to the niches, as we will see prominent examples of later, that is becoming ever so important.

If Shop truly becomes a brands-first marketplace, it will be interesting to see how they allow Shopify brands to distinctively connect or communicate with customers. And more so, are they able to facilitate those connections while maintaining the ease of use that Amazon shoppers have grown to expect.

Although the execution is still unclear, that certainly seems to be the goal.

Spend even five minutes talking to @Tobi about @Shop and you’ll understand the app for what it is. Obectives: 1/ post-purchase loyalty ⬆️ 2/ LTV ⬆️ 3/ enabler of local eCommerce It restarts the purchase cycle rather than, solely, facilitating the end of it.

Google has confirmed that the site speed ranking signals are a small, even “teeny tiny” ranking factor in Google search.

The Tweet, if you want to dive into the thread yourself:

@jocherivolta @pedrodias Ranking wise it’s a teeny tiny factor, very similar to https ranking boost. That particular one is not surprising. You do that primarily to enable users to convert.

Schema Version 8.0 was officially released yesterday. It is one of the quickest growing areas of SEO, and is worth paying attention to as it grows to cover new industries and add new SERPs features with rich results:

With both Google & Facebook moving towards a crawl/index product feed, Schema data is getting more important on the paid side as well.

In early March, Google announced it would switch fully over to mobile-first indexing by September 2020. But now Google may decide to delay it because of COVID-19. So far, John Mueller from Google said, it seems like things are on schedule but they may decide based on feedback to delay it if they find sites are not moving over due to resource issues. 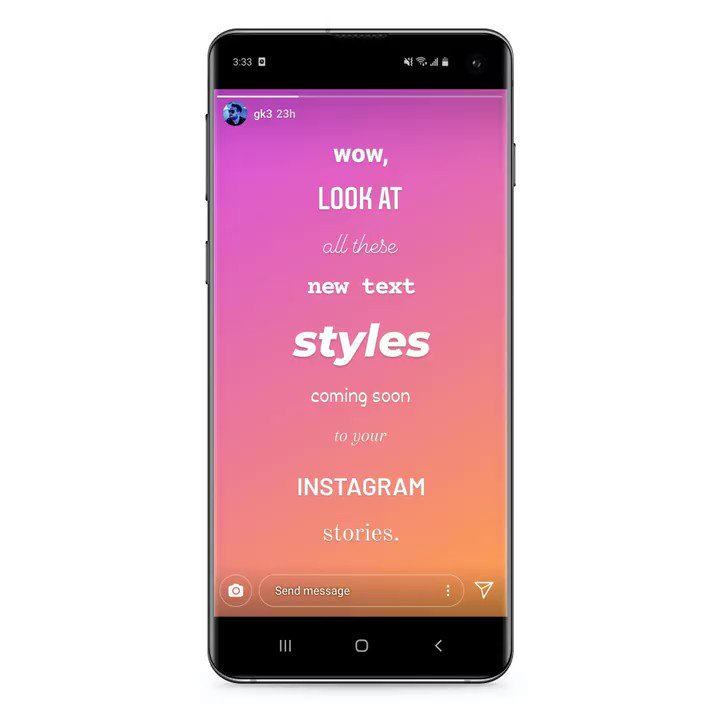 …users are now able to head to ‘Styled by Levi’s’ and take a quick, visual quiz – choosing the images of models that best suit their style – which then generates a custom Pinterest board of shoppable Levi’s Pins, aligned with their chosen look.

You can take the quiz for yourself here.

The true scope of that is hard to fathom – the population of the entire world is 7.8 billion, and when you also take into account that Facebook is banned in China (1.4b) and several other nations, and that only around half of the world is able to access the internet at all, Facebook’s active reach, via its various apps, is almost absolute in practical terms.

The vast majority of people who can access Facebook’s apps, use them, simple as that.

TikTok is testing a ‘shop now’ button for influencer videos

TikTok is testing a new ad format that links advertisers to its prominent influencers to let those creators display a prominent call-to-action button in their videos, according to people familiar with the matter. The ad revenue will be split between TikTok and the influencer.

The test demonstrates how TikTok, mostly considered a brand advertising platform for experimental budgets by many media buyers, is building both its performance advertising offerings and its nascent Creator Marketplace that links advertisers with vetted publishers and influencers.

Facebook is expanding its test of in-stream ads in Facebook Live to more verticals, including “pre-vetted entertainment, news and sports partners,” the company announced this week. The test is designed to help evaluate whether or not the ad format is effective before rolling it out more broadly.

For now, Facebook is piloting in-stream ads with only a select number of publishers. The limited test will help determine if pre-vetted content creators are able to successfully monetize their live video streams with in-stream ads. 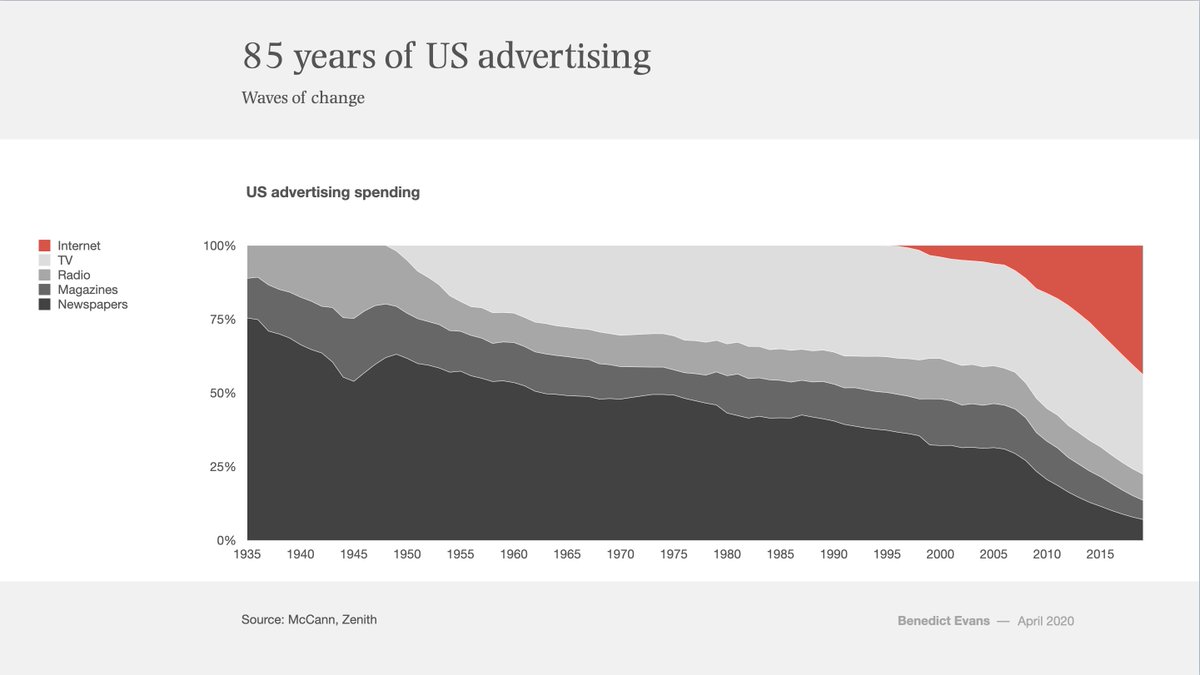 85 years of US advertising.

The 2008-2009 financial crisis was turning point for print advertising. Ad budgets left. But when they came back, they did not return to print.

You can’t help but ask yourself if a similar shift is in store for the current crisis. Television seems like the most obvious place to consider - both in viewer habits (the surge of cord-cutters), but also because production studios have been unable to film for many months. Without product, there may be a gap large enough for viewers to change their habits permanently.

And one more from Benedict Evans, that continues to prove that commerce increasingly happens in the niches. 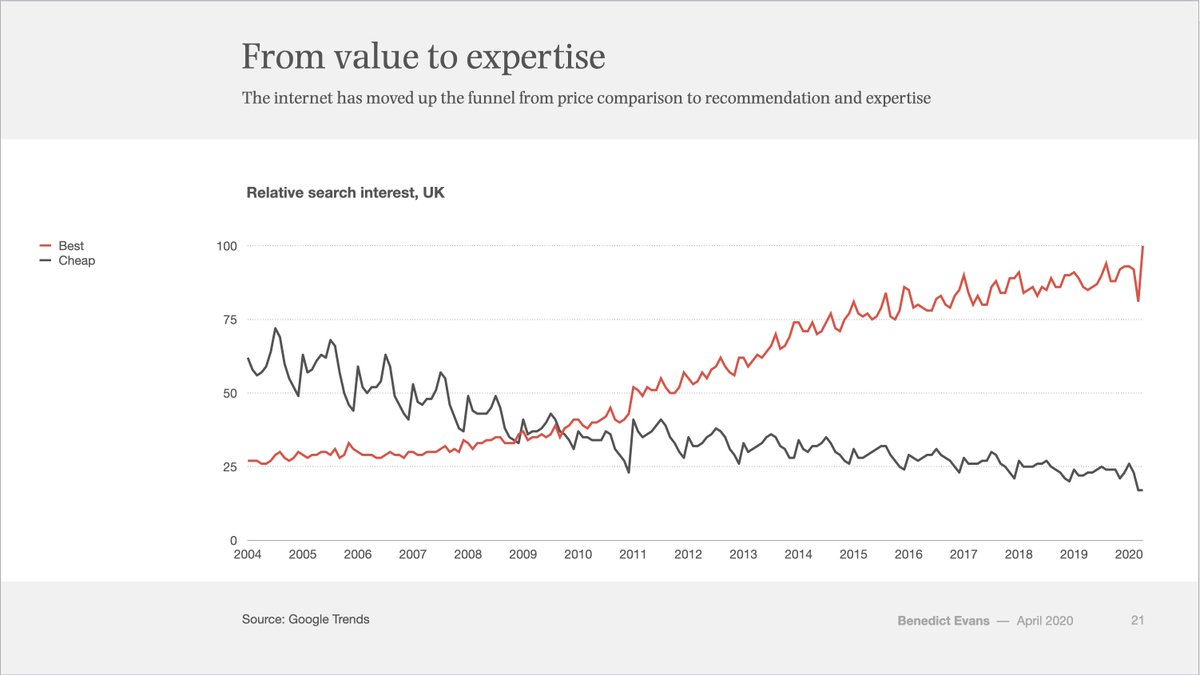 Retailers such as John Lewis & Partners are starting to join up their online and offline data silos to streamline the overall customer experience and allow for better targeting in the online space. However, the next stage in the evolution of frictionless actually lies in advertising formats becoming direct sales channels.

People are already dipping their toes in the water with social commerce and new types of connectivity. They purchase that new outfit directly through shoppable ads on Instagram, they’re starting to buy on TikTok and some can even order food while they’re still in their cars. In fact, they can now get a subscription to Coca-Cola and get exclusive tastes of new drinks before they hit the shelves.

Shopify has also been busy with product announcements for their core product too, as they help retailers adapt to the pandemic world: 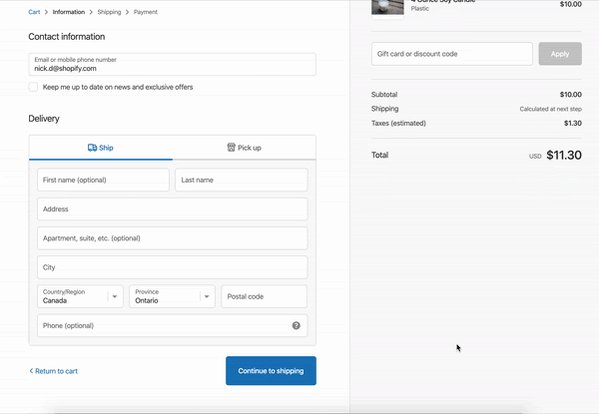 VaynerCommerce’s offering will provide new sources of repeatable growth for e-commerce brands by embracing a full-funnel, rapid-experimentation-based approach across creative, media and technology. In addition, VaynerCommerce will consult with brands to solve and develop solutions to specific e-commerce problems.

A very interesting & exciting move for my friends at VaynerX.

The current crisis has big CPGs rethinking their DTC strategies

The biggest change will be the way brands try to facilitate online sales themselves. For example, SMS-based platform Iris Nova behind the beverage Dirty Lemon is already seeing an influx of interest from big companies hoping to test out new, more direct channels. “We’re speaking with several large strategics right now,” said the company’s founder and CEO Zak Normandin, about taking “some of their core products and bringing them onto the platform.” Coca Cola is one of Iris Nova’s largest outside investors — and is, indeed, considering using Iris Nova’s platform to directly sell certain products to consumers.

What these big CPG players are on the hunt for, said Normandin, is a way to facilitate more direct commerce with customers — as well as something that lets companies more easily collect customer data. Platforms like Amazon, for example, give scant user information beyond the fact that a sale was made. In Normandin’s eyes, this lack of control may bring about the e-commerce giant’s downfall. “We think in the future — specifically in over the next six to twelve months — Amazon is going to be extremely fragmented,” he said.

An authenticated cross-site scripting (Authenticated XSS) is the same vulnerability only this one happens when a user is logged in. The user can be anyone ranging from a site member all the way up to the administrator level.

For that reason it’s important to stay on top of XSS vulnerabilities and keep your WordPress installation patched to the very latest version.

Make sure your site is updated to Wordpress 5.4.1 to protect yourself against these vulnerabilities.

“In ‘normal,’ steady-state growth, the default choices and the incumbent companies soak up most of the new use, unless you carve out some radically new market (such as Warby Parker).

“But when the incumbents are swamped and everyone is frantically trying everything, it may be easier for new voices to be heard. Again — the market is being reset.”

Left behind in this pursuit will be many consumer product giants (P&G, General Mills, Unilever, etc.). Having withheld entry into ecommerce for fear of “channel conflict” and apathy created by the assumption that it’s a small victory to be won, legacy manufacturers lack the ability to move with the speed of DTC.

Move being the operative word.

Facebook has started to reopen some moderation centres but the return to work will be voluntary for its content reviewers.

Good news for those of us waiting on manual reviews.

Starting on April 30, 2020, Trello will start to roll out an expansion of free team members’ permissions. As a result, all members of free teams will soon have admin permissions, giving them a lot more control within the platform without having to upgrade to a paid tier.

As permissions are expanded, anyone in a free team will be able to add or remove team members, which means that there won’t be any more admin bottlenecks to worry about. Also, any team member can now change team-level privacy settings to make it easier to control information-sharing.

Unable to film new commercials during the coronavirus pandemic, advertising agencies are turning to technologies that can seamlessly alter old footage, sometimes putting viewers in a position of doubting what they are seeing.

The producers made the commercial by layering video of Mr. Mayne’s 60-year-old mouth onto footage of his 38-year-old face. To many viewers, the stunt provided a welcome moment of levity in depressing times. Others were made uneasy by the smoothness of the patch, describing it as a type of deepfake.

You just read issue #13 of Cache. You can also browse the full archives of this newsletter.