More than most, this week played host to two ever-unfolding storylines - an analytics story and a social story.

First, we will look at the upcoming Facebook boycott.

Second, we will look at the saga of whether the upcoming release of Safari will block Google Analytics.

When you’re trying to generate leads for your business, it can be a challenge to optimize campaigns for lead quality. In some cases, this is because your conversion data may be captured in offline customer relationship management (CRM) systems. Offline conversion tracking enables you to import these conversions directly into Google Ads, giving you a better view of how your targeting, bids, and creative combine to drive performance. In addition, it makes it easier for you to use Smart Bidding, as this imported conversion data provides a more reliable signal for our bidding models.

However, getting this data out of a CRM system and into Google Ads can be difficult–especially if you have limited technical resources. That’s why we’ve collaborated with Zapier to help them develop their Google Ads integration. Zapier’s automation solution will make it easier for you to identify and extract CRM-based conversion events, format the data, and upload it directly to Google Ads.

Okay, not exactly new news. But this was new to me. Perhaps I missed it earlier this year, but having Zapier integration for offline conversions could be a game-changer for folks driving customer leads through Google Ads.

Microsoft’s Digital Marketing Center is heading into a pilot stage that is accepting new participants. The platform is designed to help small and medium-sized businesses manage digital campaigns across multiple networks from one interface.

We have touched on Microsoft’s recent investments into every layer of the development stack for most eCommerce retailers. From my vantage point, this is the first time we have seen that investment bubble out to help marketers.

The similarity might be the ability to curate and share things, similar to Pinterest Pins, but Roger Montti, CEO at Martinibuster.com, identified the difference — “Keen represents a new opportunity to grow popularity and traffic [because] the most powerful recommendation a website can receive is a recommendation from one friend to another.”

It’s also different from a Google search. “A search engine is passive,” Montti wrote. “It waits for someone to ask it a question. … Instead of passively suggesting content in response to search queries, Keen actively recommends content that people will enjoy.”

The curation of content also lets Google know what a person’s specific interests are, collecting additional clues as the company drops the support for third-party cookies in Chrome.

Last week, I introduced you to Keen. This post serves as a nice follow-up, as it aims to put Keen into context amongst other referral traffic sources.

An upcoming version of Google Shopping shows evidence of some new features that will enhance your online shopping. A teardown of version 52 of the app revealed assets relating to AR item previews (similar to those in the Amazon and Ikea apps), dark mode, and a Google Lens shortcut built into the search bar.

Someday soon, AR depictions of your products will be an essential part of product photography. Almost every major tech player is incorporating them into some part of their stack.

This week, a collection of civil rights groups, including the Anti-Defamation League, the NAACP, Sleeping Giants and Common Sense Media, have teamed up to launch a new campaign calling on major advertisers to pause their Facebook ad spend in July, in order to send a message to the company that its lack of action is not good enough.

Of course, the primarily focus of the protest surrounds Facebook’s lack of action in censoring posts by President Trump - with special emphasis paid to topics like the Black Lives Matter protest and mail-in ballots. Several of Trump’s tweets were recently flagged in various ways for violating Twitter policies. Meanwhile, though the Facebook posts have been similar (if not identical), Facebook has been silent on the matter. 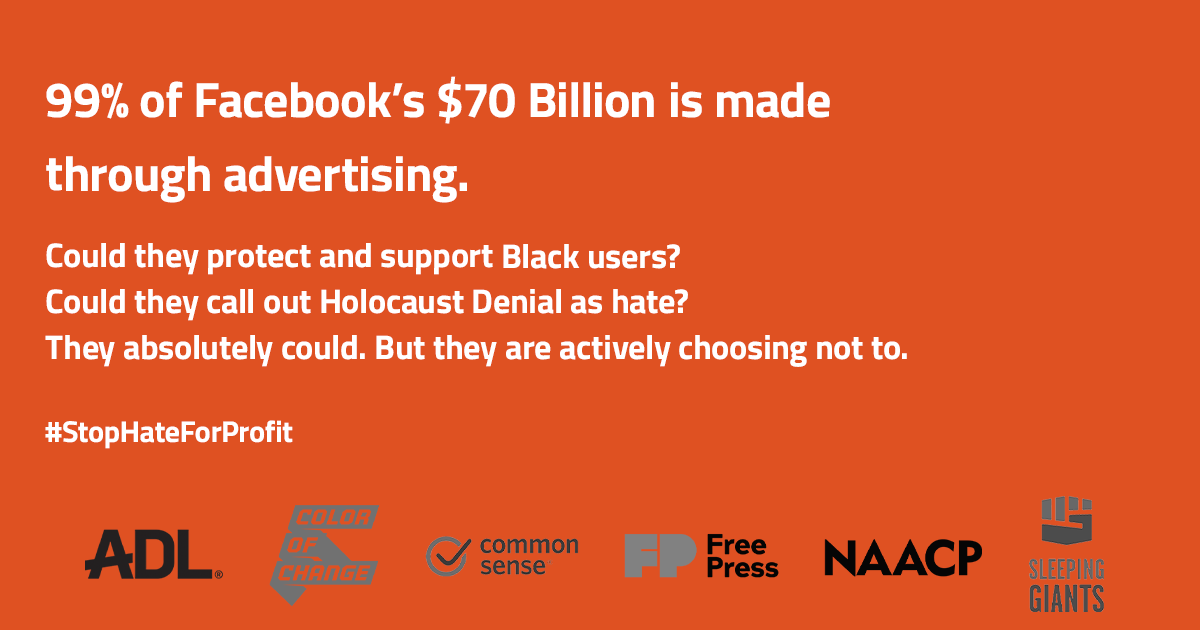 As Facebook continues its failure to meaningfully address the spread of hate on its platforms we join @NAACP, @slpng_giants, @freepress, @CommonSense and @ColorOfChange in calling for a one-month ad pause for July. Facebook must #StopHateforProfit:

Tech companies are not doing enough to fight hate on their digital social platforms. They must Stop Hate for Profit. Join the fight.

“We are asking all businesses to stand in solidarity with our most deeply held American values of freedom, equality and justice and not advertise on Facebook’s services in July.”

As the week has gone on, this protest has continued to grow:

After a handful of outdoor companies like North Face, REI and Patagonia said they would stop advertising on Facebook and Instagram last week, several other advertisers have joined the movement, including Ben & Jerry’s, Eileen Fisher, Eddie Bauer, Magnolia Pictures, Upwork, HigherRing, Dashlane, TalkSpace and Arc’teryx.

On Tuesday, Marc Pritchard, chief brand officer at Procter & Gamble, one of the largest advertisers in the country, threatened to pull spending if platforms didn’t take “appropriate systemic action” to address hate speech.

In recent days, Facebook removed ads from Mr. Trump’s re-election campaign that featured a red triangular symbol used by the Nazis during World War II. The company also announced that it would gradually allow users to opt out of seeing political ads. On Sunday, it acknowledged in a blog post that its enforcement of content rules “isn’t perfect.”

So, there does seem to be a line to be crossed. It is just way out there.

CPG powerhouse, Unilever, also committed to the protest on Friday. This move elicited a response from Facebook, although it seems unlikely the response will be enough to change the boycott’s course.

Under mounting pressure from advertisers, Facebook Inc. said it would start labeling political speech that violates its rules and take other measures to prevent voter suppression and protect minorities from abuse.

The new policies were announced Friday shortly after The Wall Street Journal reported that consumer-goods giant Unilever PLC is halting U.S. advertising on Facebook and Twitter Inc. for at least the remainder of the year, citing hate speech and divisive content on the platforms.

But despite the attention, this is not the first time a tech platform has experienced this level of scrutiny.

Now a real thing. BUT recall that YouTube went through this for a while — lost AT&T, others — but came back more or less unscathed.

At a quick glance, my own Twitter feed now has around one Promoted tweet every six slots or so, and it now updates every time I refresh, when I used to only see ads early in the stream. Twitter has been slowly upping its ad load for some time, but it seems to have been pushing them a little harder in recent weeks.

We asked Twitter if it had increased ad load - here’s Twitter’s response:

“We regularly experiment and deploy changes to our advertising experience, while aligning to our principles and standards of a high-quality experience on Twitter. We are constantly innovating and testing, and will continue to adapt as we learn.”

Instagram is introducing the ability for advertisers to run ads on its platform without connecting to a Facebook ad account. The feature seems to be only available to brands and creators in Turkey and the US for now. It is also only available to those who are promoting on Instagram for the first time and have not yet connected to their Facebook accounts.

At its WWDC 2020 keynote on Monday, Apple announced a suite of new privacy features in the macOS Big Sur version of Safari that included a new Privacy Report showing which trackers are blocked on a site.

Apple Insider and Search Engine Journal both confirmed the change.

And technologist Benedict Evans even confirmed this story on Twitter - a tweet that has since been deleted. Why? Because it wasn’t true.

I’ve tried Safari 14 (on macOS Big Sur), and tested the behaviour of GA vs Safari 13.1, and didn’t immediately see any noticeable difference, other than v14 reports domains on which ITP blocked cookies. cc @SimoAhava @benedictevans

So what is really happening?

[Safari’s] Intelligent Tracking Prevention flags domains as being potential tracking domains if it detects requests being sent to them by the browser from a sufficient number of unique domains.

ITP does this to hundreds upon hundreds of domains for any regular Safari user. It’s been doing this since its introduction in 2017. This is how Safari slowly closes the noose around cross-site trackers.

Join me in a sigh of relief…for now. The writing is on the wall and marketers would be wise to take note. If you are not investing in ways to strengthen your direct connection to customers (Hello email marketing, because everything old is new again), then you should be. It is also a valuable time to explore ways of leveraging peer marketing, like customer referral programs.

Tangential to this discussion, on the topic of advertising, iOS 14 did claim a few tracking casualties - especially if you market apps.

Like Google’s advertising identifier, GAID, Apple’s Identifier for Advertisers helps mobile marketers attribute ad spend. What that means, essentially, is that when a company like Lyft or Kabam runs user acquisition campaigns to gain new mobile customers, a mobile measurement partner like Adjust, Singular, Kochava, or AppsFlyer can help them connect a click on an ad with an eventual app install on a specific device. (Full disclosure: I do some consulting for Singular.) That helps Lyft know that an ad worked, and that whatever ad network they used for it succeeded.

Plus, if the person who installed that app eventually signs up for an account and takes a ride share, Lyft knows where and how to attribute the results of that marketing effort, and connect it to the ad spend that initiated it. Even better, from Lyft’s perspective, it can use the IDFA to tell mobile ad networks essentially: I like users like this; go find me more.

All of that is going away with iOS 14.

At least we will always have Chrome. 🙃

Recently, we identified several cases where this service was misused: attackers injected malicious code into sites, which collected all the data entered by users, and then sent it via Analytics. As a result, the attackers could access the stolen data in their Google Analytics account.

Hackers are injecting their own Analytics snippets into sites and using the snippet to skim data from the website’s customers.

Shoppers have reached this page as a result of adding items to their carts, and have therefore indicated an intent to purchase. The cart / basket pages needs to allow customers to check key details and move them into checkout without too much friction.

I’m not much for listicles, but this is a nice audit checklist for your cart page.

Then something happened at Google. I’m not sure what. But they stopped innovating on cloud software.

Even though I have an iPhone and a MacBook, I’ve been married to Google services. I browse Chrome. I use Gmail. I get directions and lookup restaurants on Maps. I’m a YouTube addict.

Yet I’ve been ungluing myself from Google so far this year. Not because of Google-is-reading-my-emails-and-tracking-every-keystroke reasons, but because I like other software so much more that it’s worth switching.

You just read issue #21 of Cache. You can also browse the full archives of this newsletter.