Why do I have an office? An office tour

I have worked remotely for almost my entire career and always viewed not working in a traditional office as a freedom that provided flexibility. Back in 2014, I worked in an office for six months when I started working. I hated it. In an ideal world, I like to constantly switch between my home office, coffee shops and co-working spaces but the pandemic put a stop to this. Obviously. Like most, I was limited to working from home during the height of the pandemic. Since I’m immunocompromised, I had everything from medications to groceries to takeout delivered to me. My desk was less than two metres away from my bed. I couldn’t go to the park or go for walks without risking my life. I no longer worked from home. I lived at work. It was incredibly difficult to not take naps during work and stop working at 4-5pm. I often slept during work hours and worked during sleep hours. This would work for some people but I was incredibly unhappy. My house had been sucked dry of any creativity.

I had my first dose of Pfizer so I looked into getting a separate apartment to use as my place of work and creative space. (I am extremely lucky that I have the income to do this and that rent is comparatively cheap in my city). I first moved into a small studio that was eight minutes away from me. It was very modern with its European style built-in fridge, dishwasher and stove but was incredibly small. You couldn’t even fit a queen sized bed in there. The problem was that even though the building was supposedly non-smoking, my lovely neighbours were constantly smoking in their units, in the hallways and the lobby. This caused my asthma to flare up and I was going through emergency inhalers like pigeons through garbage. I ultimately voided the lease which cost me $2500 even though it was only a few weeks. I am still salty about this. I searched Facebook and Craigslist (making sure my neighbours followed the rules) and came across a large loft that was only five minutes away. It was a little more expensive ($150 more) but is quite literally several times as big. I love that the apartment is above a grocery store allowing me to go there for drinks and snacks instead of using UberEats (them $5.99 delivery fees 😭).

Lets tour the space. When you walk into the building, you can either take the stairs or the elevator. I try to use the stairs most days but the elevator was nice for when I moved in and when I’m tired. Walking into the unit, you are met with a long hallway where there’s two closets and the door to the bathroom. 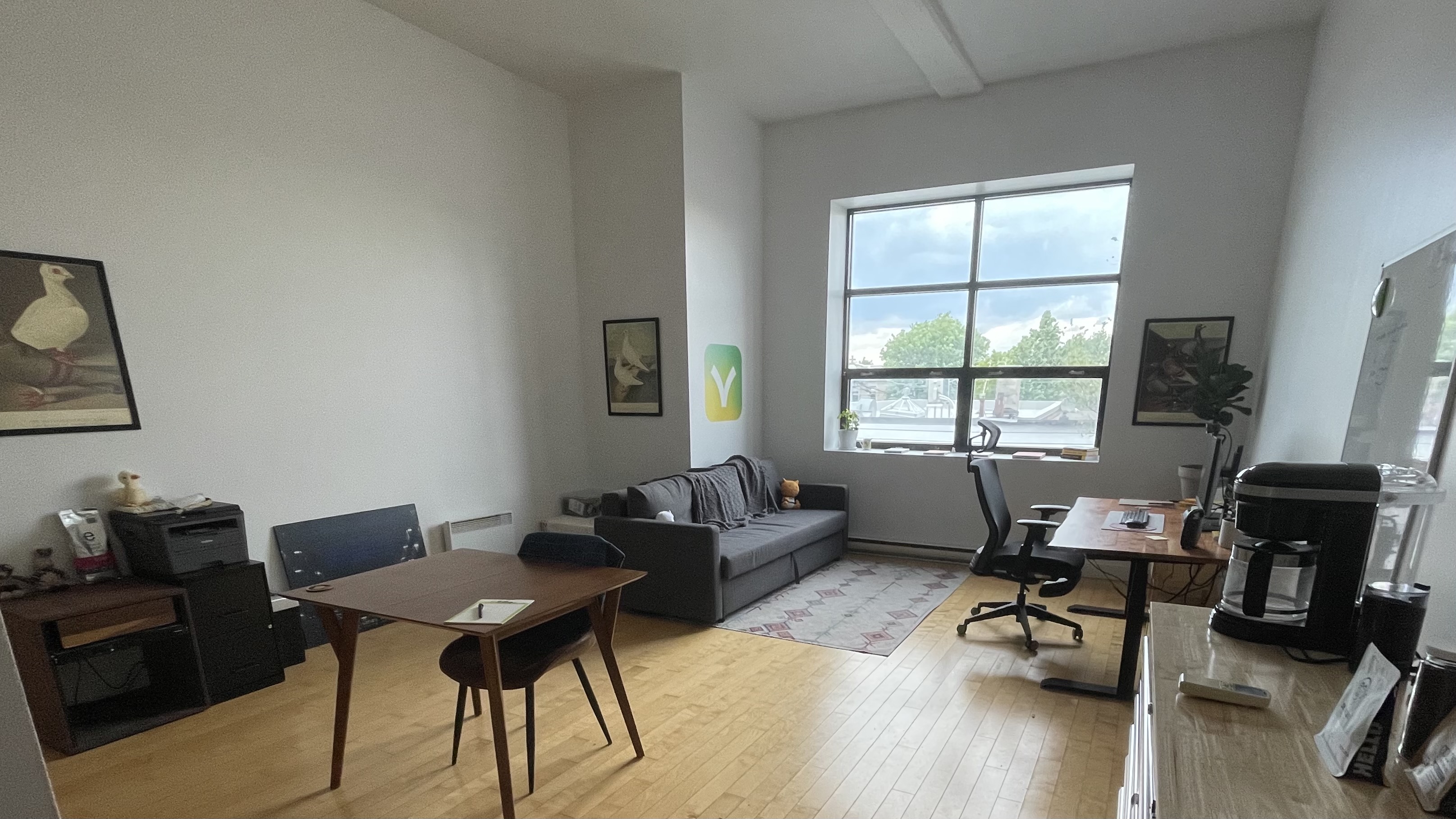 For starters, I love the large window. With all of the natural light, I rarely use the ceiling lights which saves me $$ on electricity. I have a coffee corner, writing/eating desk, printing station, nap couch, and (where the magic happens) my desk. The couch came free with the unit which is awesome because couches are super expensive. I really wanted some art for the walls so I bought some pigeon prints from Hunnap Print House on Etsy. The coffee machine saves me money because I’m not ordering in Starbucks all the time and the printer…the printer sucks (it doesn’t even have colour!) but it does its job which is good.

I eventually want my office to look like a jungle or a forest. I currently have a few plants named Scott, Abagail and Olivia. Scott is a Schefflera and she’s recovering from a cold shock when I moved apartments. That darn Montreal weather! Abagail is a Ficus plant and Olivia is a Ficus tree (although a different strain). They’re all from Alma Plantes, which is a really cute plant store in my neighbourhood. 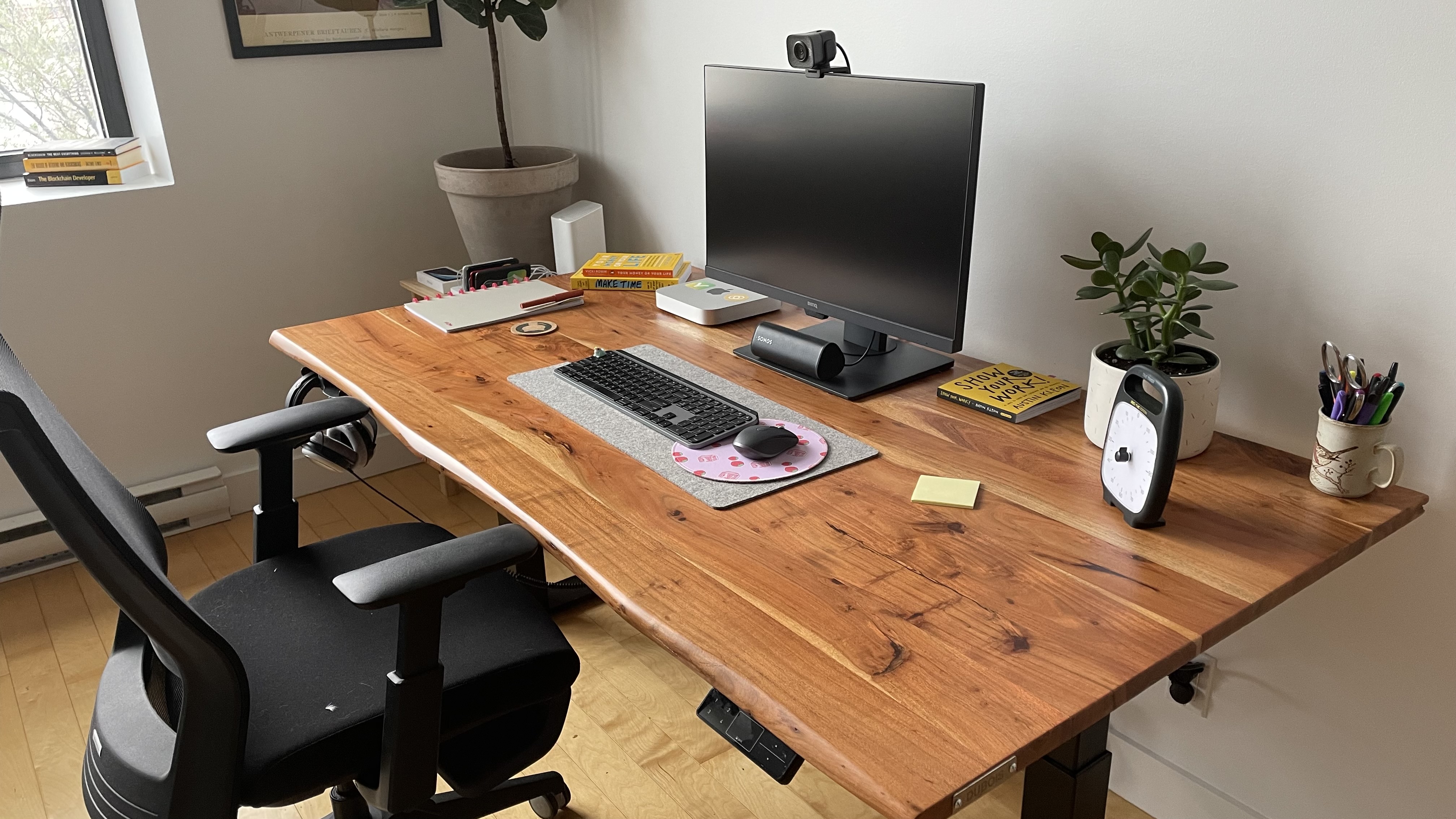 I love to watch YouTube videos and read about desk setups so I am excited to share mine. The desk was hand made from a local company in Montreal called Dubois. It was kind of expensive but is very sturdy being hardwood and I used my old sit stand legs from Ergonofis. I have two desk mats, the felt one is from Grovemade and the strawberry one is from a store on Etsy called TawnyIllustrations. I don’t particularly like the sensory of the felt against my hand while moving the mouse so I use the round one as a buffer. It’s also incredibly cute! I also have a time timer and a bunch of books. As for tech, I’m using an M1 Mac Mini with 16GBs of ram and a 1TB SSD. For peripherals, I’m using a 27” 4K monitor from BenQ, several Logitech products (MX Keys, MX Anywhere 3, Streamcam), and Sonos Roam Bluetooth speaker. Luckily I had a budget from work and they paid for basically everything. 🥵💸

The kitchen is kind of excessive for my use but I want to use it more. Currently, I primarily use the kitchen to heat up food that my brother-in-law prepared for me and store drinks. Maybe one day I’ll actually prepare food in this space but T R A U M A. 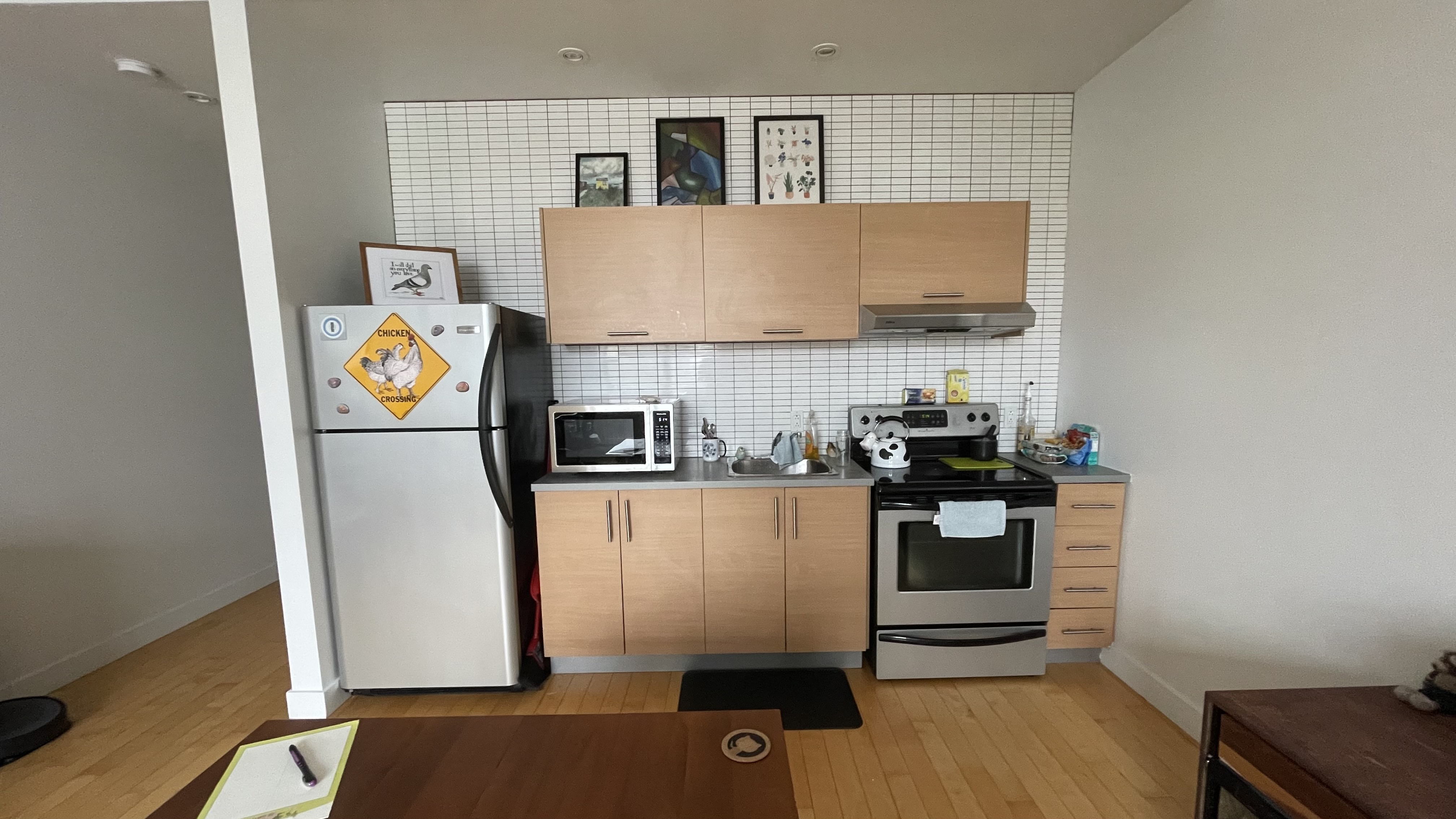 I love my moo cow kettle. Actually I made a montage of me making tea in my old office with it. You can watch the video here.

This space allows me to be creative and get work done more effectively which makes the cost worth it IMO. I’ve written most of my blog posts here and it’s just so refreshing to have a space to call my own. Please feel free to email me questions and comments at kara@noisypigeon.blog or on Discord at noisypigeon#2023. 🥺👉🏻👈🏻

You just read issue #7 of The Noisy Pigeon. You can also browse the full archives of this newsletter.