Welcome to the 37th edition of The Newsletter Leaf Journal, the official newsletter of the perennially virid online magazine, The New Leaf Journal. As always, this newsletter comes to you from the waterproof keyboard of Nicholas A. Ferrell, editor of The New Leaf Journal. I come bearing summaries of and links to our content from the past week, content recommendations from around the web, an article recommendation from our archive, and news, notes, and anecdotes. Settle in with our official bug-eyed mascot, Mr. Envelope, for another exciting edition of our humble newsletter.

1. New Leaves from the Week that Was

I published six articles since I sent the last newsletter. I covered everything from 21st century alternative search engines to nineteenth century Kodak cameras. See our content summaries, with links, below.

“A 2021 List of Alternative Search Engines and Search Resources” 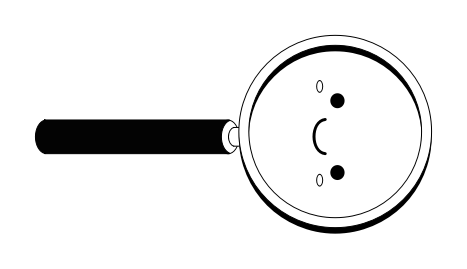 I received helpful feedback in The New Leaf Journal Guestbook from an interesting tech writer who goes by “Sierdy.” After reading his comment, I updated my article with the information he added about how DuckDuckGo (and some other similar alternative search engines) use various sources to inform their search results. I will be recommending a post from Mr. Sierdy in our “Leaves from Around the Web” section.

In last week’s newsletter, I recommended an article about Ms. Meghan Markle and her publisher offering a 107-word audio book version of her children’s picture book for $15. I expanded my quip into a full post, focusing on the question of why one would need an audio book version of a picture book at all. The article concludes with a digression about how her naming her book “The Bench” reminded me of a very unserious anime series.

“The Questionable NYC Mayoral Campaign About Page of Maya Wiley”

Several months ago I wrote an article about former New York City Republican mayoral candidate Sara Tirschwell’s terrible campaign “About Page.” . It recently came to my attention that Ms. Maya Wiley current candidate in the Democratic primary election for the same office, , had an About Page that was subpar for similar reasons. Not one to miss an opportunity, I analyzed Ms. Wiley’s campaign About Page in detail and compared it to those of her main opponents. 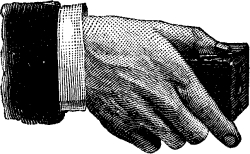 The Pocket Kodak as illustrated the magazine.

Scabby the inflatable Union Rat is a common site in New York City and (as I have been led to believe) in other big cities. A union rat with a coffin and inflatable hazmat suit man, however, is less common. Fortunately, your favorite nature photographer chronicled the rare trio at your favorite online magazine.

“How to Find Substack RSS Feeds and Other Notes”

I am not as enamored with Substack as its biggest proponents, but on the whole, I think any service that gives individual content creators a way to reach new audiences is a good thing. I personally prefer Buttondown for sending newsletters (evinced by the fact that this newsletter comes to you courtesy of Buttondown), but Substack is a viable option for more commercial projects.

I prefer to consume content via RSS feeds than email newsletters. There are a few Substack authors I am interested in following. I was curious if Substack newsletters had RSS feeds. I found that indeed they do - hidden feeds, but feeds nonetheless. In this very brief article, I explain how to find them.

2. Leaves from Around the Web

Although I left you with well over 10,000 words of new content at The New Leaf Journal this week, I know that may not be enough for voracious readers. Below, you will find six additional content recommendations from around the web for your enjoyment.

Seirdy: “A look at search engines with their own indexes”

I thanked him for his feedback and incorporated it into my post. I made a few recommendations for his post regarding webmaster tools for certain search engines and an additional international search engine. Mr. Seirdy incorporated my additions into his post with credit (thank you for the backlink).

If you enjoy my alternative search engine post, be sure to read Mr. Seirdy’s as well.

Mr. David Reaboi is a political writer and consultant who has achieved a following on Twitter for his content about politics, bodybuilding, and jazz. He started a Substack, and his first post - “Aesthetics & Obsessions” - is short and worth a read. See his conclusion:

“I still think that process [of pursuing an aesthetic obsession] is beautiful and worthwhile–especially now, as we’ve got so much access to knowledge at our fingertips. I’m sure that availability, combined with the coarseness of our aesthetic sensibilities, has a lot to do with what seems like a great decline in curiosity about the beautiful things that make life worth living.”

Well put. I am sensing a future article at the The New Leaf Journal.

SoraNews24: “You can now rent ‘fat people’ in Japan”

To be clear, not sumo wrestlers. Regular people.

Never stop being you, Japan.

UX Collective: “The origin story of the Wingdings font”

An interesting piece on the history of the Wingdings font family with a number of external links. I may write about Wingdings for a future around the web post.

Ambient Irony: “Myself Yourself”

Like School Days, the Myself;Yourself anime was based on a visual novel and aired in 2007. Also like School Days, it was bad - albeit for different reasons. In this post, Pixy Misa reviewed the first episode - which was the only episode that had aired at the time:

“High school romance. Childhood friends separated and reunited. Indifferently animated; while digital animation ensures that everything is clear and colorful, I don’t get the impression that anyone particularly cared about this show.”

Despite my having only watched Myself;Yourself years ago and having concurred with the vast majority that it was subpar, one of the voices was memorable enough (in a traumatic way) for me to immediately comprehend the reference.

Why include a random episode review from 2007? I thought about Myself;Yourself when I wrote my piece on when to sit through a bad movie last year. I will review it at The New Leaf Journal someday. It is a bad show, but bad in strange ways.

It is not often that I side with the European Union in a dispute such as this one, but it should not come as a great surprise given my essays on big tech that I am not unsympathetic to what our friends across the pond are getting at.

As the temperatures grow warmer, the-man-with-the-hose awakens from his slumber…

Below, you will find our most-read articles from the last Newsletter Week Journal - the 24th week overall in 2021. In parentheses, you will see the article’s change in rank from the previous week. Below the article, you will find additional information about how it has ranked in 2021.

My post on Tsuki ga Kirei leads the ranking for the sixth consecutive newsletter week - and it did so again by a wide margin. In so doing, it became the first article to lead the 2021 rankings for six straight weeks. It is one week short of the most weeks in first place behind Victor V. Gurbo’s review of two protective masks.

Below, I will list some news, notes, and anecdotes (with leaf puns).

I did not make any changes to the site structure this week, but I still plan to finish the category and tag reorganization in the near future.

We received our first recorded referral from the Peekier search engine. I spoke favorably about this unique (and endearing) search engine in my Wutsearch review and in my recent search engine survey. 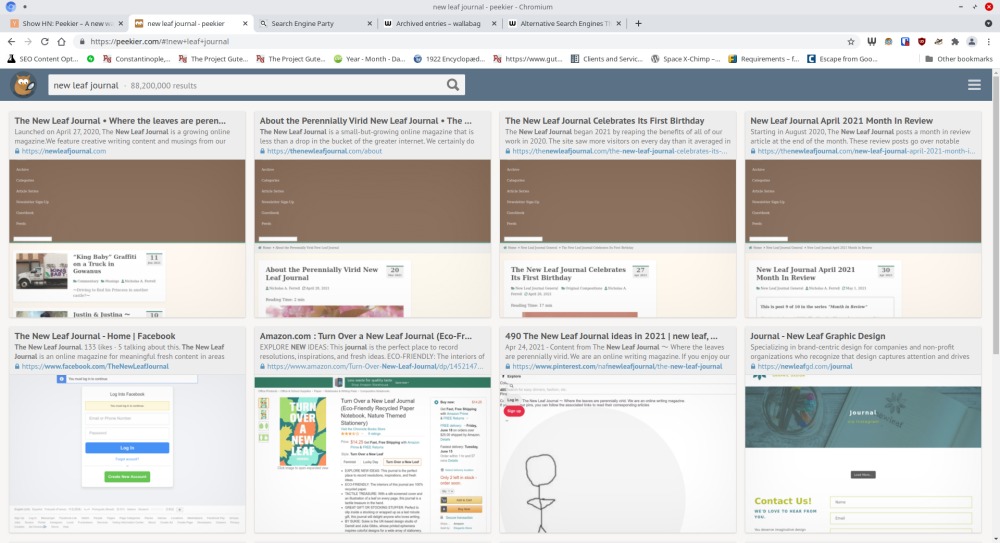 I am glad to see that a few people out there are giving it a spin (especially if they learned about it from our content). I will review Peekier in some detail at some point this summer.

In previous newsletters, I have noted that I have a collection of photos of a growing geese family to publish (I may start on that project next week). My need-to-publish photo collection is growing. In the past week, I have added inanimate objects with googly eyes and a squirrel visitor to the collection. My colleague, Victor V. Gurbo, will be busy with photo re-touching.

I hope you enjoyed our final spring newsletter. I look forward to writing to you in the summer next Saturday. If you are not already a newsletter subscriber, I hope you consider joining us for future installments. We offer the ability to subscribe via email or RSS feed on our newsletter sign-up page.

Thank you, as always, for reading and following The Newsletter Leaf Journal.

You just read issue #38 of The Newsletter Leaf Journal. You can also browse the full archives of this newsletter.