I read an interesting article about good form in writing newsletters. The author suggested that one should always introduce himself at the start of a newsletter. Why? Because sometimes subscribers may forget what newsletters they subscribed to or why. I thought it was a good idea. This is the 24th edition of The Newsletter Leaf Journal, and I am the editor and acting administrator of The New Leaf Journal (a variety writing website), Nicholas A. Ferrell.

This edition of the Newsletter is a good one for a re-introduction. After having used Tiny Letter to send the first 23 newsletters, Mr. Envelope and I have switched over to Buttondown. See how happy Mr. Envelope is about the move below.

I am impressed thus far. To commemorate the move, I created a new Newsletter Leaf Journal sign-up page that has been described as “terrifying” and had at least one commenter tell me to “burn it with fire. (What else would I burn it with? Acid?) Ringing endorsements, I think. While you subscribers do not need to sign up again, I would like to advise you that you can now follow our newsletter with an RSS reader. Speaking of RSS…

Hacker News and My RSS Article

Last Monday, someone who I do not know submitted Victor’s January article about old guitars to Hacker News, a news aggregator that is popular among techies. That same individual had previously submitted one of my articles about birds. Both articles did well by the standards of our humble site, but neither “blew up,” as Victor would say.

A friend decided to try submitting one of our articles that may be of more interest to the average Hacker News reader. In went my post suggesting RSS readers as a Facebook news alternative.

We made it to page one of Hacker News, ranking as high as #7, and within 48 hours, the RSS article received about as many views as the entire New Leaf Journal had received since it launched on April 27, 2020.

Once things began to calm down, I thought of what Elon Musk said when he learned that he had become the richest man on Earth.

That’s something. Well, back to work.

(P.S. I don’t want to be a tech writer. Why are my two most-read articles and three of my five most-read articles tech related? I’m resisting pigeon-holing, I’d rather write about pigeons, in fact. With that being said, I have some interesting tech reviews and tech content in the pipeline, so please look forward to them.)

New Leaf Journal Content From the Week that Was

Other than the Hacker News madness, it was a normal week here at The New Leaf Journal for article posting. I published six articles this week, including the four that I promised in last week’s newsletter.

A Japanese Way of Confessing Love?

I learned of an interesting anecdote from watching anime. It is said that Natsume Souseki, one of the preeminent Japanese novelists of the late nineteenth and early twentieth centuries, once translated “I love you” from English as “Tsuki ga kirei desu ne?” What does that mean? “The Moon is beautiful, isn’t it?”

Beautiful and curious, is it not? As interesting as the story is, there is some debate as to if it ever happened. In a very long and unique Around the Web post, I brought together all the English-language sources on the story in what turned into the second longest New Leaf Journal article yet - just behind my December piece on anime recommendations.

It’s quite long, but I think that you will find it interesting. I dare say, having done quite a bit of research, that this article stands as the most comprehensive English language exploration of the Soseki anecdote available online.

Artilcle on The New Leaf Journal.

Calvin Coolidge is one of my favorite U.S. Presidents, and I am quite partial to his 1929 Autobiography. Despite his reputation as “Silent Cal,” Coolidge betrayed a wonderful aesthetic sensibility at certain points of his autobiography. In this article, I describe and quote his beautiful description of his mother, Victoria Coolidge, whom he lost when he was still a young boy. See a small preview of what he wrote below:

“There was a touch of mysticism and poetry in her nature which made her love to gaze at the purple sunsets and watch the evening stars.”

My article has more quotes where that one came from.

Literary Inspiration for Our Emu Cafe

Last week, I reviewed a translated collection of short stories by the early twentieth century Japanese writer, Ryunosuke Akutagawa. That, in turn, allowed me to publish an article that I had drafted in December.

The last story in the Akutagawa collection is called “The Dragon,” although some other collections call it “The Potter’s Tale.” The story begins with a nobleman soliciting interesting stories from commoners for a book that he was putting together. My article keys in on the brief introduction wherein Akutagawa describes the nobleman bursting into a tea house and boisterously making his request. I could not help but think of my own Emu Café when I read it.

How the Forget-Me-Not Flower Found Its Name

While searching for content, I came across a lovely little 1899 poem on how the forget-me-not flower got its name. God named all the flowers, but one flower forgot its name. I will leave the resolution of the conundrum for the article itself.

The poem made me curious - how did the forget-me-not flower actually find its name? It turns out that the name traces its origins to an old German fairy tale (about as cheery as one would expect), which made its way to old French and then English. I concluded with a forget-me-not video game anecdote from 2004, dating myself as I’m wont to do.

I found a couple of other charming poems from the same 1899 magazine that contained the gem of a forget-me-not flower origin story. You should look forward to reading those in the coming week.

The Penultimate Bird in Review

As we roll into March, I finally reviewed the ninth of ten birds in the January 1897 bird magazine that I have been working on: the Red-Rumped Tanager.

Problem: No bird today is called the “Red-Rumped Tanager.”

As I confessed in the article, I became a bit confused while writing as to the identity of the bird that I was covering. Fortunately, I was able to untangle the somewhat complicated avian situation. We are left with what I think is an interesting look at Cherrie’s Tanager, one of two Scarlet-Rumped Tanagers.

This recap is making me realize that I did almost as much research for The New Leaf Journal this week as I did in my day job as a legal researcher and writer.

A Picture of a Mint Bike in the Snow

I need a chip-shot article once in a while. This week’s chip-shot was an article about two pictures that I took in the melting snow. First there is a mint-colored bike. Second there is a discarded chair in Brooklyn. Well, the bike picture came out quite well, I think. 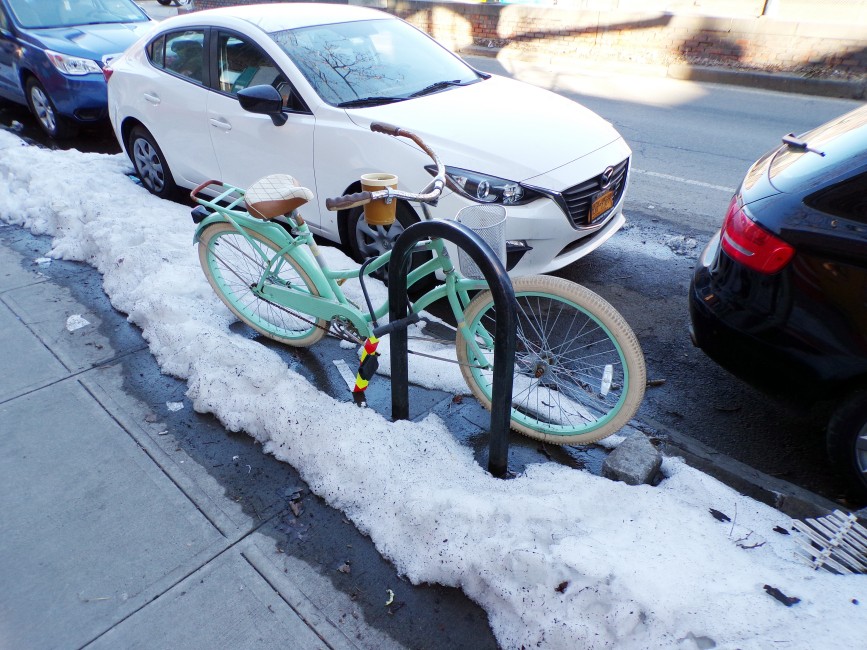 Normally, my articles centered on random pictures that I take do not do particularly well. The mint bike, however, had impeccable timing, being the most recently posted article as thousands of new visitors flooded the site expecting tech content.

Well, it did not receive thousands of views, but it would have featured on our Most Viewed sidebar widget in less busy times.

A Micropost on a Pet Pigeon

Micropost on The New Leaf Journal.

I seldom feature microposts since I post them as ephemeral curiosities to remind visitors to check our sidebar. This one, however, is worth sharing. It is a video of a pet pigeon putting itself to bed. I can’t think of a better way to spend 30 seconds of your life aside from opening up one of our terrific new articles.

While I was working on updating our site to account for the Newsletter Leaf Journal’s move from Tiny Letter to Buttondown, I began working on some additional updates.

First, I renamed Newsletter in the header menu from “Newsletter” to “Newsletter Sign-Up” in order to make it more obvious for potential new subscribers. For the newsletter sign-up page itself, I pushed our sign-up button to the top.

Second, I moved “Authors” under “About” in our header menu in order to make it less crowded. There are links to my author profile page and Victor’s all over the site, so I do not think it needs to be a primary category on the header menu.

Third, I revamped our RSS feed page. Before yesterday, the “RSS” field on the header menu was merely a link to our main RSS feed. We have multiple RSS feeds, however. Furthermore, after staking our claim to (very minor) fame with an article about RSS, I thought that I should put more work into featuring our feeds.

I renamed “RSS” as “Feeds” on the header menu. If you click “Feeds,” you will be taken to a new RSS Feed hub page. At the moment, it contains links to five separate feeds along with a list of the five most recent posts in each feed with automatic updates. If you hover over “Feeds” on the header menu (or expand it on mobile devices), you will see links for each of our feeds, properly labeled.

At the moment, we offer five feeds that you can follow:

Each feed offers something different - I suggest following all five. For those who are interested, I also have a Mastodon RSS feed. I generally only post articles with brief descriptions on Mastodon, so I don’t think it is worth featuring on the site itself. But it exists if you want links to some older content that you may have missed. What is Mastodon? Think of it as a sort of decentralized Twitter.

I plan to revamp our About the Site page this week. I designed it back when we were using the free version of the theme that we implemented back in June. Furthermore, the information and content on the page could be a refresher. I bemoaned the fact that I had not already completed this project when we had the Hacker News referral avalanche.

I plan to finish the January 1897 Bird Magazine project this week - so you can expect to see an article on the Golden Oriole followed by a post with all of the poems from that issue of the Bird magazine that I have held off on publishing. I will also publish a shorter post on two poems from the magazine that I drew the forget-me-not flower article from. I have various ides for other content this week, but I have yet to decide which ones I will focus on.

Before those projects, however, I am taking Monday off from posting a full article. I will, however, chip in 2-3 microposts, so you should find something amusing if you check the site a few times.

Thank you, as always, for reading The New Leaf Journal and following The Newsletter Leaf Journal. It is much appreciated, and I look forward to working on content to make it worth your while.

For my final note - Buttondown uses markdown formatting for newsletters. I am getting used to it, so perhaps future editions will be fancier as it becomes more natural to me.

You just read issue #24 of The Newsletter Leaf Journal. You can also browse the full archives of this newsletter.