I covered much of the content that would have otherwise been in this edition of The Newsletter Leaf Journal in the January Review post that I published yesterday.  For that reason, I will keep today's newsletter brief in order to avoid redundancies.  You can see the month in review article for a full recap of this month's content and some things to look forward to in February.

For the Newsletter, I will review our content from the past week and conclude the post with a brief story.

I published five articles this week in addition to the aforementioned January Review post.

I began the week with the seventh Justin and Justina dialogue.  In this piece, Justina expresses her confusion about a blog post I covered in an earlier article recommendations post.  Justina understood misery to be the point of big tech social media.  Do others understand it differently?  While she goes on and on, Justin plays the straight man in the conversation for once.

On Tuesday and Wednesday, I published articles based on recent news stories.  First, I published a post on out-of-work Swiss commercial pilots transitioning to driving trains.  Second, I published an article about an interesting Tokyo District Court decision upholding Japan's prohibition on dual citizenship.  I included "Interesting" in the title of the article, so I could not be anything but.

On Friday, I continued my series on birds covered in the January 1897 edition of a bird magazine for children.  This article addresses the Australian Grass Parrakeet.  Why "parrakeet" instead of "parakeet"?  I took a brief digression in the article to study questions about the proper spelling of parakeet. 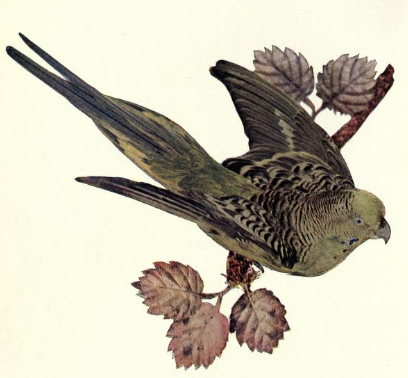 Finally, I published our weekly article recommendations article this morning.  While I cannot say for sure, I am confident that it is the only list of recommended articles that you will read that includes cicadas in New York, roosters in Japan, and natural gas in Turkmenistan.

On January 22, I published an article about a picture I took of a falcon on the Queensboro Bridge in 2019.  The other day, I saw a small hawk on the sidewalk in downtown Brooklyn.  I did not take a picture for two reasons.  First, I did not have my phone or a camera.  Second, it flew away with what appeared to be a sparrow in its talon about fifteen seconds after I first saw it.  Mark that down as the most unusual thing I've seen in 2021 thus far.

I stumbled on an interesting search engine this week called Peekier.  Peekier is a privacy-friendly search engine.  But unlike other engines, it shows a website preview in its search resorts, allowing users to see an entire page or a large snippet of a page without opening the link.  It appears to rely exclusively on search results from Bing.  I am interested in writing a full review of it later in February, but I will first contact the team to learn a bit more about how it works.  Not to mention - look at the Peekier mascot on the Contact Page.  I think he would be sad if I did not send a few questions.

Thank You For Subscribing

Thank you as always for subscribing to and reading The Newsletter Leaf Journal.  January was our busiest month by a wide margin, and, as I explain in the January Review post, I am exploring ways to grow the site in the months to come while continuing to post virid content.

You just read issue #18 of The Newsletter Leaf Journal. You can also browse the full archives of this newsletter.