The first full week of 2021 was an exciting week for The New Leaf Journal.

To start, it was our busiest week yet.  We brought in solid numbers of viewers each day and are making marked progress in our search engine performance.

Second, I implemented a big improvement to the site structure in the form of article series.

Third, and perhaps most important, we published new content each day this week, including our 200th article yesterday.

I don't suppose that you are too interested in learning about our page view counts, so let us instead start with discussing the addition of series to the site and then continue to the new content from the week that was.

I have added series functionality to the site.  In short, I can now designate any group of articles as belonging to a series.  When you open any individual article in the series, there will be a block in the article (usually at the top).  This block does two things.  By default, it displays the name of the series, what number the current article is in the series, and a short description of the series.  When you interact with the block by clicking on it or tapping it, it will reveal a drop-down menu with a clickable list of all the articles in the series.

Each series has its own archive page.  The series pages work the same as our category and tag pages.  I have included links to many of these pages in our header menu.  If you click on "Article Series," you will be taken to a new page on the site that lists every series.  If you hover over Article Series, you will see a dropdown menu with several featured series.

I have had some complaints that the series box in the article is not entirely intuitive - that is, that it is not clear to all readers that you can find a list of all the articles in the series by clicking on or tapping the series block.  I will look into how to make it more intuitive for new visitors.

All in all, I think the new series functionality is a big improvement for the site, and will make it easier to navigate for old and new visitors alike.  You can learn more about how I implemented series in my article about using the WP Post Series plugin.

Adding RSS to the Header Menu

I decided to add "RSS" to the header menu.  Unlike the other items on the "header menu," RSS has no drop-down menu.  Instead, clicking on it takes you to our RSS page.  You can copy the RSS link and add it to your favorite RSS reader to ensure that you are made aware of our articles when they are published.

We published six new articles since the last Newsletter Leaf Journal, not including today's edition of our Sunday article recommendations.  Victor returned this week, so we each recommended three pieces of content from around the web.  I added an internet resource recommendation along with an article from our archive.

Fittingly for a week where I introduced series functionality, I started a new series on the subject of an 1897 bird magazine for children.  On Tuesday, I published a general overview of the January 1897 inaugural edition of Birds: A Monthly Serial.  Yesterday, I published the first proper entry in the series - a review of the beautiful Nonpareil, the first bird that the magazine covered.  I went beyond the magazine's own content, including some contemporary resources and a section with interesting dictionary definitions.  If you enjoy this article, we still have nine more birds to go in January.

On Friday, I published one of the last articles that I had drafted prior to the official launch of The New Leaf Journal.  Two years ago to the day I published the article, I discovered something of a video game time capsule, an unfinished round of Mario Party from 17-19 years earlier.  Naturally, I finished the game.  The long article includes the full story, additional context, and my thoughts on broader takeaways from the amusing anecdote.

Victor published an article on Monday on the subject of vintage guitars.  Victor makes the case that functioning vintage guitars are not mere cool curiosities.  Instead, he lists reasons why they actually sound better than most contemporary instruments.  Because I do not know much about guitars, I am more than inclined to take his word for it.  Guitar fans will appreciate his photos of a couple of the finer instruments from his collection.

Most of my posts this week were quite long, so I published a bit of a breather-article on Thursday.  This article covers Japan's Hometown Tax System, whereby taxpaying Japanese can allocate a certain percentage of their local taxes to the locale of their choice.  Most locales offer a gift in return for being designated as a Hometown Tax System beneficiary.  One, that I examine in the article, offers to tend to the local grave of the payee's choosing s a way of saying thank you.  Quite nice, as I opine in the content.

Finally, I introduced the post series functionality for the site, which I noted earlier in the newsletter.

Prior to the start of The New Leaf Journal, I drafted just over 20 article ideas.  I have used nearly all of them, and the Mario Party post was the last long one in the queue.  While I thought about publishing it last year, I decided that it would be fitting to publish it two years after the event that inspired it.

My final version of the article was much longer and more comprehensive than the original draft.  Furthermore, as I note in the article, my original draft contained an error that a careful reader would have been able to catch by studying the text and the in-game screenshot.  Namely, I stated in my draft that even if I had won the last mini game, I would have still lost in the final standings.  It turns out that for somewhat indirect reasons now explained in the article, I would have actually won had I won the last mini game.  I caught this error while posting the final picture and preparing to schedule the article for publication.  After redoing most of the implicated section, I was able to schedule the article to go live on Friday morning. 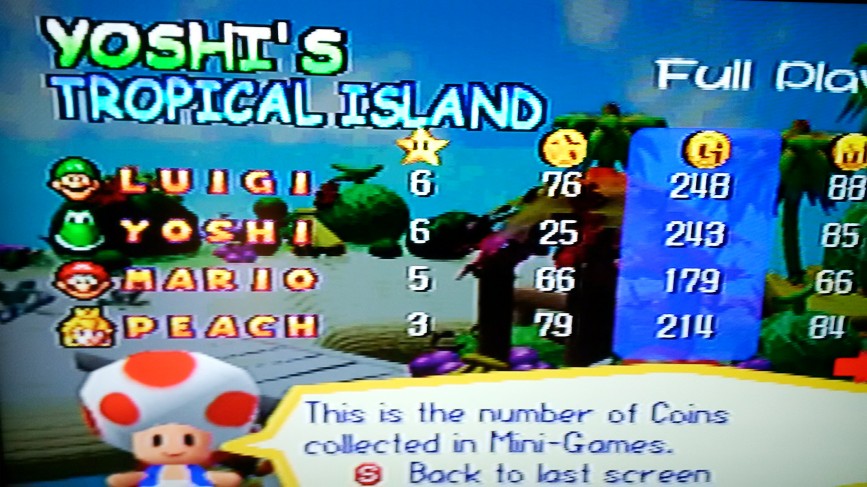 The screenshot in question

I noted in the post that I was in the early stages of recovering from surgery when I discovered the Mario Party adventure.  To be sure, that health mishap delayed work on The New Leaf Journal for a few months.  But all's well that ends well, I suppose.  I ended up getting a long article out of it.

2021 is off to a quick start for The New Leaf Journal with new viewers and our 200th article.  I am continuing to work on improving the site structure and finding new ways to reach new audiences.  I have been pleased to see our improvement with search engines of late and our relative success on alternative decentralized social media platforms (see example).  I look forward to sharing more new content, and perhaps some site news, next Sunday.

You just read issue #15 of The Newsletter Leaf Journal. You can also browse the full archives of this newsletter.