In this week's edition of The Newsletter Leaf Journal, we bring you news of a new Sunday series of content recommendations and our five articles from the week that was.

New Series:  NLJ Content Recommendations From Around the Web

Starting today and going forward, we will post content recommendations from around the internet every Sunday.  To start, Victor and I are each recommending three off-site pieces of content.  Each entry in the series will also feature a link to an older New Leaf Journal article for your enjoyment.  In the future, we may include other recommendations in these posts based such as books, music, or games.  You will be able to find all of our Sunday recommendation posts in a new sub-category on site.

Victor and I worked together to post five articles during the past week.

I started the week with our longest New Leaf Journal article to date, a 4,000 word essay on fact-checking reform.  With reference to an interesting blog post about fact-checking, I listed problems with the contemporary fact-checking industry.  After examining the lay of the land, I offered principles for sound fact-checking.

On Tuesday, I published an article about a dispute between Hadrian (before he became Roman Emperor) and the renowned architect Apollodorus of Damascus.  According to the third-century historian of Rome, Cassius Dio, Apollodorus dismissed the young Hadrian's opinions about architecture in a condescending way.  Years later, then-Emperor Hadrian finished what Apollodorus started by having him exiled and then executed.  Many later historians have come to doubt Cassius Dio's account of Hadrian having Apollodorus executed.  Regardless of the fact of the matter, however, it makes for a good story.  My article concludes with a separate account of a debate between Hadrian and a sophist philosopher.

On Wednesday, Victor published his list of most "important" Bob Dylan songs by half-decade, from 1960 to the present day.  Victor chose 14 songs in all.  He suggests that some of his choices may be controversial with fellow Bob Dylan historians.  I will leave those surely contentious debates to the experts in the field.

Yesterday, I published a quasi-response to Victor's Dylan post.  Although I have few opinions about the works of Mr. Dylan, I did suggest the article topic to Victor.  In so doing, I recommended that Victor choose Dylan songs from proper decades - for example, 1961-1970.  When we talk about decades in the abstract, the best system is the 1-to-0 system (e.g., 2011-2020) instead of the more common 0-to-9 system (e.g., 2010-2019).  In any event, Victor started with 1960 and went in six-year intervals with years overlapping in the middle (e.g., 1960-1965, 1965-1970).  While I would like to classify this as some sort of seismic New Leaf Journal disagreement, I suspect that Victor just doesn't have strong opinions about the best way to conceive of decades.

Finally, on Friday, I introduced an upcoming Pokémon draft battle that Victor and I will have in late January or early February.  We each drafted Pokémon teams for the other trainer to use and will spend the next few weeks optimizing them for our battle.  My post assumes no prior knowledge of the current Pokémon battling rules and explains each step of what we are doing in some detail.  We will publish preview posts and a battle recap after the battle occurs.

My Pokémon draft battle preview post includes the opening scene of a 2019 Christmas-season battle that Victor and I fought last year.  My character, Celia, was dressed for the season in a green dress and red sweater.  Victor's character, "NIXON" (trainer number 37 ... get it?) was not dressed for the season, but I'm not sure that President NIXON was the type anyway.  (See below.) 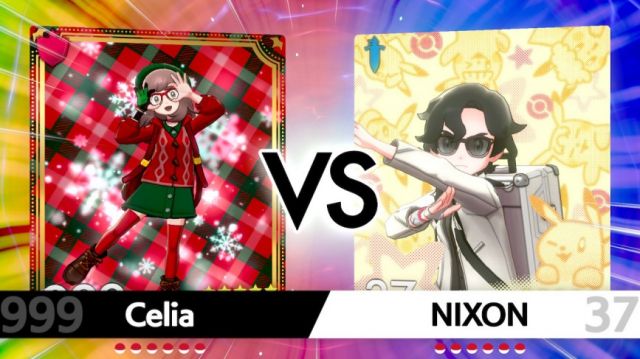 Victor is not only NIXON in Pokémon Sword, but also in other games.  For example, in one of our earliest New Leaf Journal posts in May, I wrote about the time when Apple, one of my Animal Crossing neighbors, told me about a visit she received from "NIXON" of Watergate Town.  Apple told me about this visit one evening.  When I spoke to Apple the next morning, she was deathly ill.  I learned that the question wasn't whether NIXON could go to China, but rather what he might bring back from China.  Fortunately, Apple was back to her normal self after I brought her medicine.  Although I haven't visited my Animal Crossing town since July, I trust that Apple is doing well, waiting for my return from what must be a very long trip abroad (not to China, definitely not to China).

You just read issue #11 of The Newsletter Leaf Journal. You can also browse the full archives of this newsletter.