With another week in the books, it is time for the sixth edition of The Newsletter Leaf Journal. Below, I will look back on the week that was and preview some things that we have in the works for the week to come.

The Week That Was

On September 10, Victor published our 100th New Leaf Journal article – “Is my cat deaf, or does she just not give a…?”  Victor, prompted by a comment from his mother, decided to test whether his beloved 17-year old cat, Pumpkin, is deaf.  While his experiments yielded inconclusive results, you can discover which way Victor is leaning in his humorous post.

In between those posts, I wrote an article reflecting on the 19th anniversary of the Islamist terrorist attacks in New York City, Washington D.C, and Pennsylvania in “Some Thoughts to Mark September 11, 2020.”  This September 11th brought welcome news in the form of the announcement of the normalization of ties between Israel and Bahrain.  I express my hope that some of the positive changes we are seeing in the Arab world will help ensure a safer tomorrow.

Circling back to the beginning of the week, my first article after the fifth Newsletter Leaf Journal discussed an interesting canvas that I purchased at a local antique store.  The content, “Pressed Flowers and Butterfly on Canvas,” features my first scanned picture for The New Leaf Journal.  I was a bit worried that the canvas would be too thick for the scanner to close, but I will say that the scan cane out rather nicely.

On the next day, I published “Our Friend the House Centipede,” which covered my discovering that house centipedes should be welcomed for their tendency to hunt more unwelcome creepy crawlers.  After explaining how I learned this, I offer the horrifying story of witnessing a house centipede-roach standoff in my kitchen a few months ago.  Spoiler:  I intervened to end the standoff.  About two-three days after I published the article, I saw a house centipede scurrying across my ceiling.  True to the lessons learned, I thanked it for its patrol and returned to what I was doing.

On September 9, I published an article about a classic New York Post headline from nearly one year ago:  “Ambiguous Killer Hallucinogenic Weed Headline.”  What kind of “killer hallucinogenic weed” was the New York Post referring to?  I was curious enough to click their headline, so you will have to click mine to find out.  The article features a picture of the New York Post’s printing facility in the Bronx that I took in the summer of 2019.

Finally, on September 8, I published an article about learning how to change our Twitter handle.  I would personally say this was the least interesting article of the bunch, but in the past, some of my articles complaining about Twitter have done surprisingly well.  What do I know, in the end?  You can find this article with a brief guide to Twitter handles and some more complaints about how terrible Twitter is at “Learning How to Change a Twitter Username.”

As I discussed in an article on building a new computer, my work computer runs Manjaro Linux instead of Windows.  Early in The New Leaf Journal, I introduced the use of TI-89 Titanium graphing calculator screen captures.  The Texas Instruments program for taking screen captures is Windows-only, but I was able to run it on Linux through Wine, a compatibility layer for Windows programs that I still do not know how to use well.  Since I could run the program, I decided to try plugging my TI-89 into the computer to see if I could take a capture.  Sadly, while I can run the TI-89 program, my computer did not recognize that my calculator was plugged in at all.  Having already taken the time to type a title card for our 100th article celebration, I used my old laptop, which still runs Windows 10, to take the screen capture. 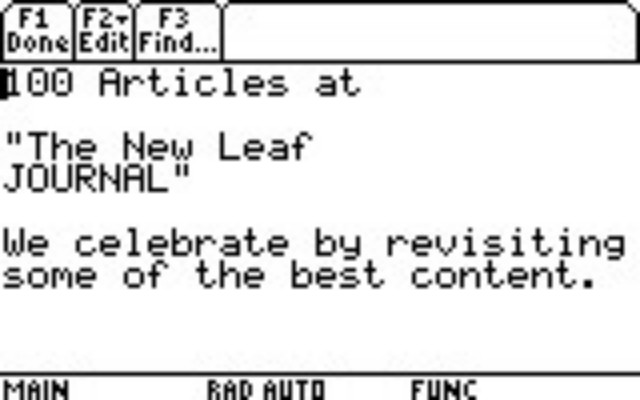 Although it is a small thing, I would like to see if it is possible to make my Linux desktop recognize the TI-89.  When I have some spare time, I will investigate.  Perhaps an article will spring forth from the investigation?

Since I have a couple of work deadlines approaching on September 16, my next few articles may be relatively light fare until my schedule is more clear – although I will still work with Victor to ensure that we post at least one new article each day, as we have done from September 1-12.  While I do not know exactly what I will post this week, I will highlight some projects that we are working on.

Last week, I noted that I am preparing a piece on my color-changing mouse.  I still want to test a few things regarding the mouse’s Windows-only utilities before publishing, but that article is otherwise almost ready to go.

Continuing with the computer theme, I revived my old desktop computer by installing a different flavor of Linux on it as its operating system – Linux Lite.  Since I discussed my old computer briefly in my article about building a new computer, I am working on a piece about giving my old computer new life with a light and user-friendly version of Linux.

Finally, on my end, I am working on some new review content regarding free books and games.  I figure that just about everyone likes free things that are good, so I will start covering more of them at The New Leaf Journal.  Those of you who use Chromium-based web browsers (e.g., Chrome, Chromium, Vivaldi, Opera, new Microsoft Edge) may find my recent review of The Great Suspender Chrome extension worth a look.

Victor is hard at work learning how to use the game-making software RPG Maker MV so we can make progress on a game-development project.  I recommended that he give the program a try after I saw his obsessive compulsive disorder at work in Animal Crossing, where he named his character “NIXON” and his town “Watergate.”  At some point in the near future, we will be able to write a bit more about it and make game prototypes available for download. 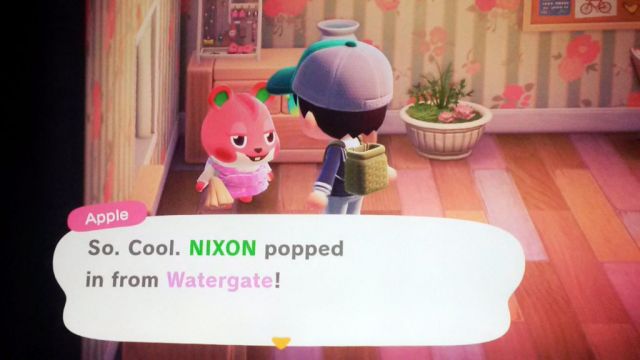 Thank you as always for following The New Leaf Journal.  If you are reading this from our newsletter archive, please consider signing up to receive site updates from us in your mailbox.  I look forward to reporting back to you next Sunday.

You just read issue #6 of The Newsletter Leaf Journal. You can also browse the full archives of this newsletter.