After a somewhat slow August, I made two announcements in last week’s New Leaf Journal August 2020 Review post.  First, I stated that we would work to publish one piece of content every day in September.  Through the first 5 days of September, we posted one piece of content on four days and two pieces of content on the fifth day, so I suppose that this plan is going better than promised thus far.  Second, I stated that we would make sure to send out one edition of The Newsletter Leaf Journal every Sunday.  This newsletter, our first since August 16, is the first step to fulfilling that aspect of the September plan for The New Leaf Journal.

I began September with two posts about things seen around Brooklyn.  We kicked off September with “The Fallen Tree in Brooklyn Heights.”  The content is more or less as advertised by the title – it is indeed about a large Brooklyn Heights tree that was brought down by high winds on August 3.  The post includes several pictures of the fallen tree and the aftermath.  My second photo-journalist post, “The Pigeon in the Puddle,” covers a pigeon walking in a puddle, and then drinking from said puddle, on a rainy day in Brooklyn.  This event is documented not only through my recollections, but also through three photos.

Shortly after posting my pigeon-puddle expose, I realized that it was the 75th V-J Day.  Not wanting to let the important occasion pass without mention, I searched for a video of the proceedings aboard the USS Missouri on archive.org.  However, instead of going with a video, I embedded in our post a 48-hour radio news recording from the day, featuring speeches by General Douglas MacArthur, Admiral Chester Nimitz, and President Harry Truman.  Having listened to the entire recording myself, I assure you that it is well-worth your time.  While listening, you can also read my thoughts on the historic day in “75th Anniversary of the Japanese Surrender.”

One day later, I posted an article documenting how I found and installed the current WordPress theme for The New Leaf Journal – BunnyPress.  Long time readers will remember that the site used the free version of the BunnyPress theme – BunnyPressLite – for most of May and part of June.  In this article, I discuss the difficulty Victor and I had purchasing the BunnyPress theme from the developer’s entirely Japanese-language website.  With that difficulty aside, however, installing and configuring BunnyPress turned out to be effortless, and I have been very satisfied with how the theme has worked for our site.  You can learn about navigating Japanese-language websites without knowing Japanese and a bit about running a WordPress website in “The BunnyPress Chronicles:  Story and Review.”

Finally, I posted an article yesterday touching on the impending end of summer and the shorter days and longer nights that come with it.  The article, “Bed in Summer, Bed in Winter,” borrows half of its title from the children’s poem “Bed in Summer” by Robert Louis Stevenson.  The article not only contains “Bed in Summer” printed in its entirely, but also approaches some of the themes of the children’s poem from the perspective of an adult, with the aid of our “Welcome to The Emu Café” post from May 16.  I conclude the article with a second Stevenson poem, “Happy Thought.”  The poems are accompanied by artwork by Myrtle Sheldon from a 1916 compilation of Stevenson’s children’s poems.

Those of you who primarily visit The New Leaf Journal through Facebook may have seen that Victor posted my first article about building a new computer – where my progress had been halted by a dead-on-arrival motherboard.  Eventually, Victor will post my article about completing my computer build, but early knowledge of the happy ending is reserved only for those of you who visit the site regularly or who subscribe to our RSS feed or RSS email.  Perhaps Victor is trying to push everyone in that direction – either that or, as he suggested, he wanted to keep the Facebook audience in suspense about my computer. 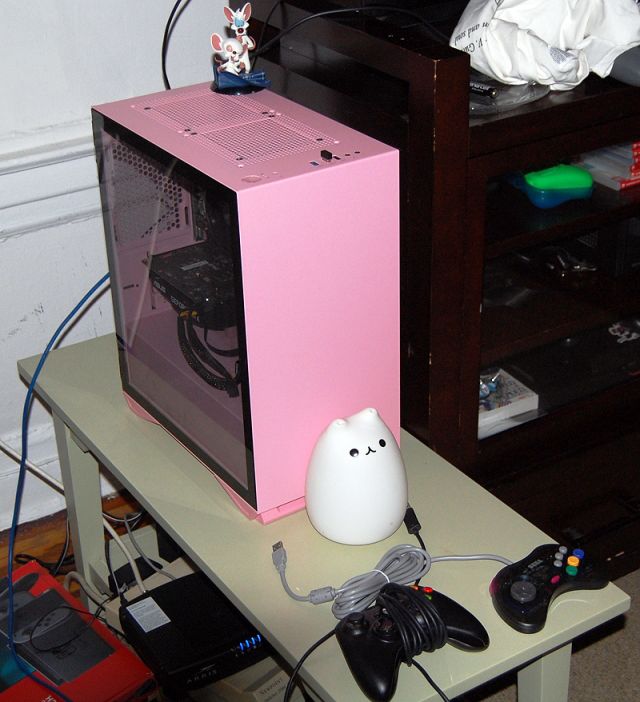 My working computer as pictured two weeks ago.  As I discuss below, the back panel that is open in the above picture now has an exhaust fan.
About a week after completing my computer, I went back in one more time to add a third case fan.  I had originally intended to add the third fan to the front panel of my case, but after doing some research about my case’s airflow, I decided to install it in the back panel.  Now, I already had two fans installed on the top of the case – but both were functioning as exhaust fans.  Having already gone through the trouble of removing my video card in order to have room to handle the fans, I switched both of the top fans to intake positions and used the back panel fan for exhaust.  Fortunately, I do not do much that would melt my computer internals, so I do not rigorously monitor the internal temperatures – but it does seem like the new airflow arrangement is working.

While dealing with the fans, I cut my finger without realizing it – it was bleeding enough for me to apply a band aid.  I thought two things.  First, it would have been a shame if, after all my work, I fried my computer by bleeding in it.  Second, I had recently completed an at-home test for the Wuhan Virus that I received unsolicited from Emory University, which is conducting a randomized nation-wide study.  The blood test portion of the test would have been much easier had I simply tried to install an extra case fan before taking it.  In case you were wondering – I do not appear to have ever had Wuhan Virus.  While that is good, I suppose, you can likely imagine that I would have had some content ideas based on my prior writings on the subject had the antibody test gone the other way.

Per the September plan, I will work with Victor to ensure that we post at least one piece of content each day this week.  Since setting up my new computer, I have been trying a variety of new applications, extensions, games, and other programs in my new Linux environment.  Since many of these extensions and applications also work in Windows, I should have some content and recommendations from my own experiences over the coming weeks and months.

In a more lighthearted tech post, I am working on an article about my mouse.  When I bought my mouse, I thought from the picture that it was plain gray and black, with a white logo.  When I plugged the mouse in, I discovered that the logo is not only illuminated by six bright colors, it also changes color about once every second.  Why does it do this?  Why do computer gamers like stuff with gaudy colors?  Furthermore, since I cannot seem to install the mouse utilities on Linux, it appears that the flashy colors are here to stay, whether I want them or not.  Are they growing on me?  You will have to stay tuned to find out.

In addition to my posts, I expect that we will see at least one article from Victor this week on some subject or another.  I recently installed new lightbox functionality for the site – so you can expect some aesthetically displayed camera photographs going forward.

While I have no substantive site changes on tap for the site this week – I expect that I will be too busy between work and producing content to work on the site’s backend – I could not help but notice that my Memorial Day post on Carleton Burr, a brave soldier who fought and died for this country in World War I – is now our most-read article over the last 30 days.  I have no idea how this happened – it was not among our most read content even when it was published.  In any event, I am glad that people are finding it now – if you have not read it yet, you can read it at “Remembering Second Lieutenant Carleton Burr for Memorial Day.”  At some point, I will return to the subject with another post on his eloquent letters from the War.

Thank You, As Always, for Following The New Leaf Journal

Thank you for reading and having subscribed to The Newsletter Leaf Journal.  I hope that you are enjoying the content and that you continue to check the site for our now-daily updates.  If you want to get in touch, you can post in our open Guestbook or send an inquiry through our Contact Form.

You just read issue #5 of The Newsletter Leaf Journal. You can also browse the full archives of this newsletter.