I was unable to post a new newsletter last week because I was busy trying to get my new computer build to work.  Sadly, as I detailed on site, it appears that my motherboard was a lemon.  I had hoped to spend this weekend completing my new computer with a replacement motherboard, but UPS has decided to deliver it on Monday after maintaining that it would arrive yesterday until the UPS truck had returned to Queens without delivering it.  While that was an annoying mail incident to be sure, it does not rise to the level of FedEx leaving Victor's expensive microphone on his sub-baked stoop.

Although I spent much of the last week since posting the NLJ Week in Review 14 fighting with my computer and writing legal memoranda, I found time to publish several new pieces of content on site.  First, I wrote about having maybe seen an exceedingly rare albino sparrow in Brooklyn Heights a couple of years ago.  Second, I published a tanka poem with my fool-proof tips on avoiding mosquitoes.  While the tips will not save me and similarly unfortunate individuals, they should work for the vast majority of you.  Finally, I published an article on a news report about a wayward emu being rescued in northern New Jersey.  In my post, I reveal that the emu, Emmui, had actually become lost while trying to find his (or her?) way to our Emu Café. 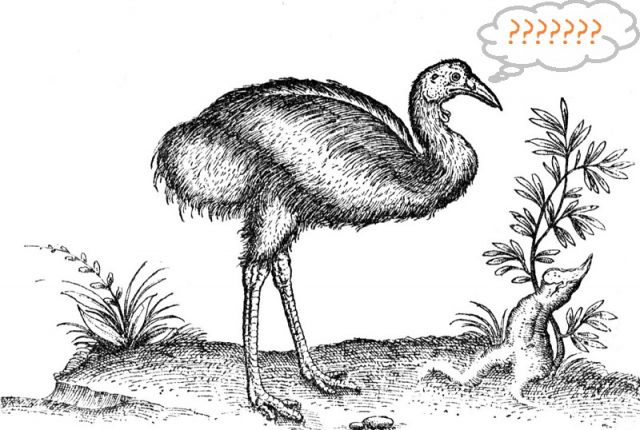 I decided not to publish a week in review this week since, at the time I would have published it, we only had two articles up for the week.  Starting next week, I will switch to a biweekly "week in review" schedule, noting that it makes little sense on slower weeks for every fourth or fifth article to be a week in review.

I am still looking at the best way to implement social media following buttons for WordPress.  However, in the meantime, you can follow us on Facebook, Twitter, and Pinterest if you use any of those services and are not following us already.

I have several articles planned for the next week.  First, I have two pieces about sights from 2018 trips across the Manhattan Bridge.  These days are not the best days to cross bridges in New York City, but that makes them the best days to look back on better times.  In the middle of the week, I will publish an article about Calvin Coolidge's anecdote of seeing then-President Benjamin Harrison deliver a speech in Vermont when Coolidge was on summer vacation from college, complete with the text of Harrison's address.  Finally, I have a couple of posts planned about recent sights in downtown Brooklyn.

Victor has been even busier than me over the last couple of weeks.  However, he may be able to publish a new article this week after a brief hiatus  Until then, you can enjoy is most recent article - an anecdote on an improbable little stream mushroom sighting.

Thank You for Reading

You just read issue #4 of The Newsletter Leaf Journal. You can also browse the full archives of this newsletter.