We’re posted up in Raleigh for a little bit. You are having a great time with your indulgent empty-nester grandparents who are happy to play board games and watch cartoons with you and compliment your drawings. Yesterday you and Grandpa got out the RC monster truck and zoomed it all over the back yard, laughing at poor Angus who kept chasing it and barking and then hopping backwards in alarm, confused as to why we weren’t helping him combat the unwholesome robotic threat.

Now that I’m trying to write about Granny’s family, though, every visit home also becomes a research trip.

My mom isn’t the most forthcoming person. The best way I’ve found to get her talking is to ask about a specific object or photograph – Where did you get this old radio? What dog is in this picture? Who collected all these shark teeth, over how many years? So I follow her around like a pestering little kid. What’s this, what’s this, what’s this?

Fortunately the house is full of objects to ask about. I would estimate about 40% of the contents of my parents’ home are from dead relatives (another 40% were acquired at Costco, the final 20% “other”). Sometimes it’s like stumbling around a very disorganized museum. Precious relics from disparate eras are stacked up on tables, shoved in corners, and stuck to the wall with failing tape. It can be distracting to feel the presence of all these things piled up and pressing on each other.

Take the junk drawer, for instance. I was staring at it last night like, I could write a whole damn essay just about this junk drawer. 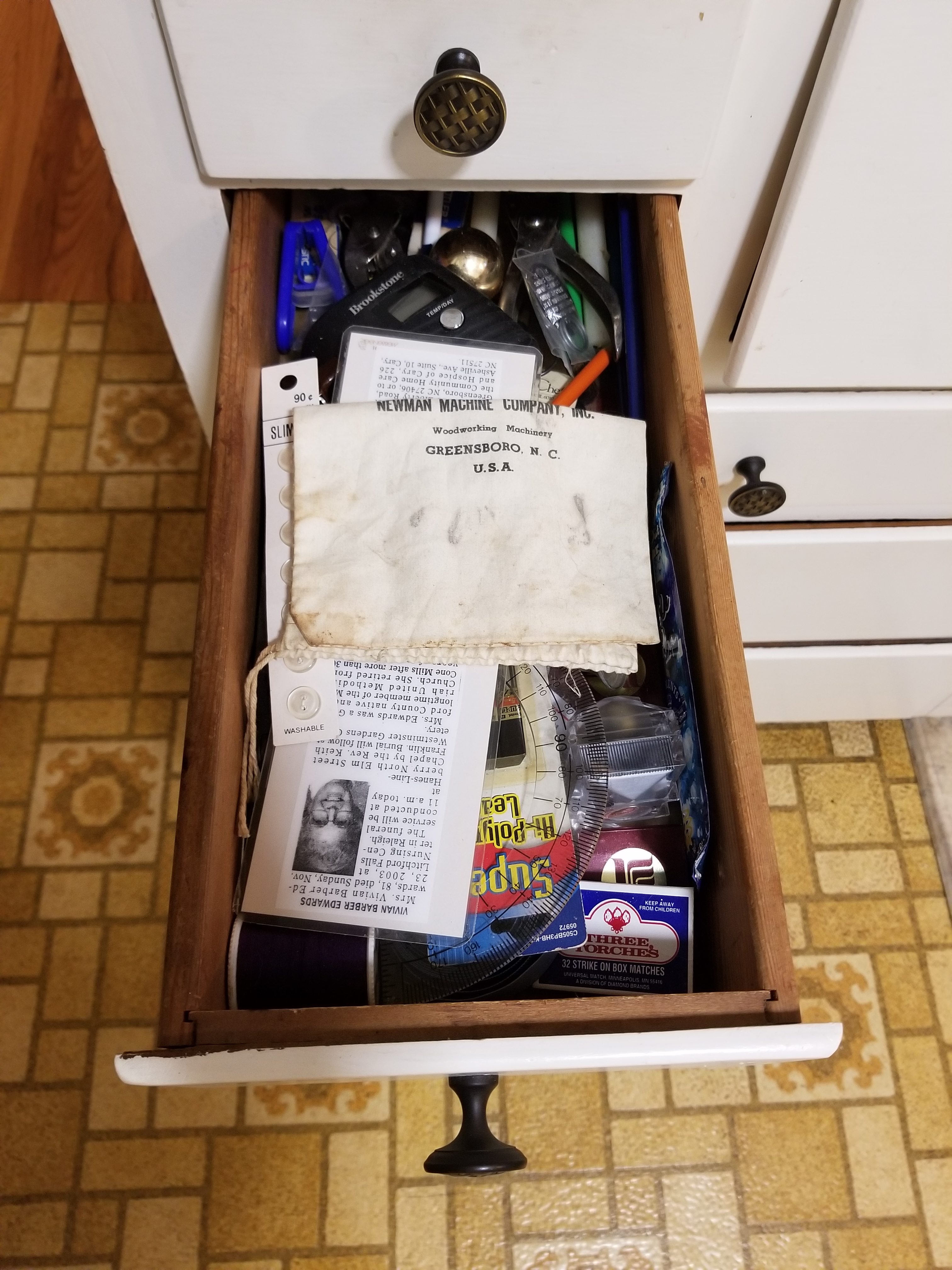 I might have been stoned, but I wasn’t incorrect.

Besides the Sharpies and dry erase markers, three corkscrews (one shaped like a cat), the thread spools and mechanical pencil lead, there’s also a laminated copy of my grandmother’s obituary from 2003. A hunk of fossilized coral. A small plastic ornament that says “Super Mom” that I purchased at the elementary school store for a few dollars sometime in the early 90s. A wooden ruler that my uncle carved his name into during his own elementary school years in the 1950s. The ruler says “Compliments of the The Coca-Cola Bottling Company” on the back. My uncle would go on to work at the bottling company, which I mostly remember because of the branded objects he acquired from work and gave to my grandparents – Coca-Cola logo bedsheets. A Coca-Cola logo trash can.

What’s this, I asked my mom about a small drawstring bag in the junk drawer. It was unfamiliar to me, made of once-white cotton and printed with the words “Newman Machine Company, Inc. Woodworking Machinery. Greensboro, NC, U.S.A.”

“That’s where Papa worked,” she told me, meaning her grandfather, Julius Edwards. “He was a night watchman. Newman – the Newman family, remember?”

I’d been talking to her about the Newman family earlier that day but the company name didn’t click until just then.

Julius, my great-grandfather, was a Newman by birth, though from what I’ve gathered not fully embraced by the family. His mother, Viola Newman, was from a relatively well-off family. I recently discovered that they were Quakers, members of Centre Friends Monthly Meeting. I haven’t yet been able to get at why Viola married Julius’s father when she was 14, or if her family disapproved for reasons beyond the religious, or if Julius’s older siblings fared any better in their esteem. Viola died when Julius was only 7 months old, so he had the least tangible connection to the Newman family.

His position at the Newman Machine Company gives some hints – he could get a job there because he was a blood relation, maybe, but only as a security guard.

I was a little surprised to find that Newman is still around, assuming that it would be long gone like other Piedmont manufacturers. But aside from a 1955 merger, it looks like they’re still much the same company, making planers and sanders and trimmers. (Some more company history here – thank you again, niche internet forums, for all you do. This one is dedicated to vintage machinery instead of Detroit record labels). The original factory in Greensboro is gone, torn down for student housing, but the business is still based in Browns Summit in Guilford County.

From what I can reconstruct from census records and Ancestry.com and such, the founder of Newman Machine Co. was Viola’s cousin’s son. So it’s not like Julius was in line to inherit the kingdom. He had little formal education and knew he wasn’t about to get a corner office when he could only sign his own name with an X. But if you can say to the big boss, hey, my mom and your dad were cousins, it might just get you a night watchman gig.

If I could turn this house into the history museum it deserves, I’d ask some philanthropist to donate acquisition funds for a Newman-Whitney S-290-BF planer. A mere $36,000!

Related content: Incredible article about family research of a different kind in the Inquirer today

You just read issue #4 of Dear Hugo. You can also browse the full archives of this newsletter.