Working On It 8: Presbyterians—tabulated, visualized, and interpreted

In 1927 the Presbyterian Church in the U.S.A. published a statistical review of their past century, tabulating membership data and other figures from 1826 to 1926. The “laborious task” took the compiler, Herman C. Weber, about three years to accomplish. Its aim was both to make permanent the research he had done on behalf of the denomination as a whole, but also to inform the ongoing ministry of individual congregations.

The volume undertook not just to tabulate but also to visualize the statistics of the church. Weber described his visualizations in a tone that’s not so different from how historians talk about visualizations today. He claimed that “the circle of those who can understand visualizations is very large,” presumably including the businessmen he had mentioned. But even then, the transformation of figures into “lines whose ups and downs and relationships can be seen at a glance” required careful interpretation, which he provided by annotating the charts.

Here are a few pages from Presbyterian Statistics through One Hundred Years, 1826–1926: Tabulated, Visualized, and Interpreted, which you can see in full at the HathiTrust. 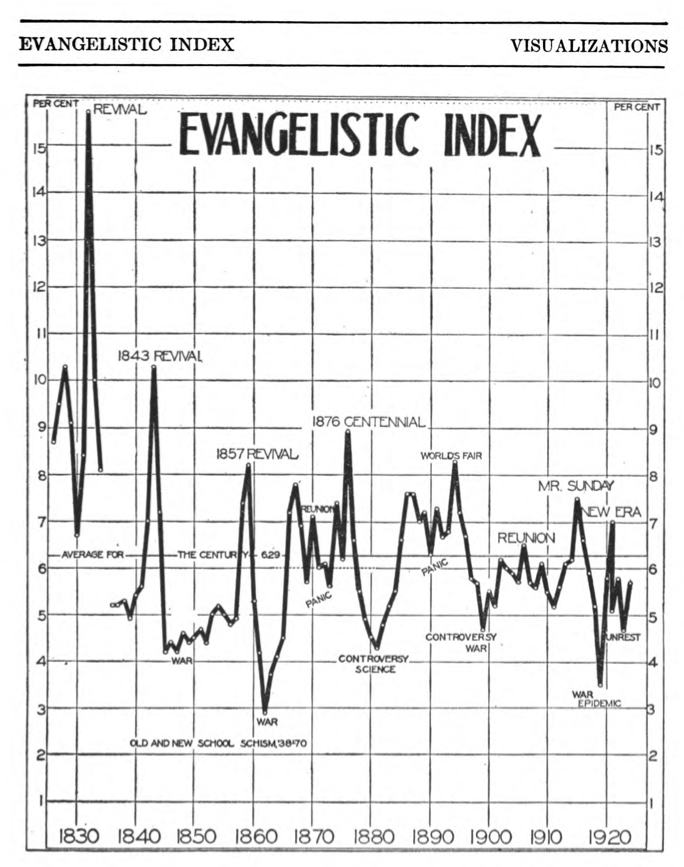 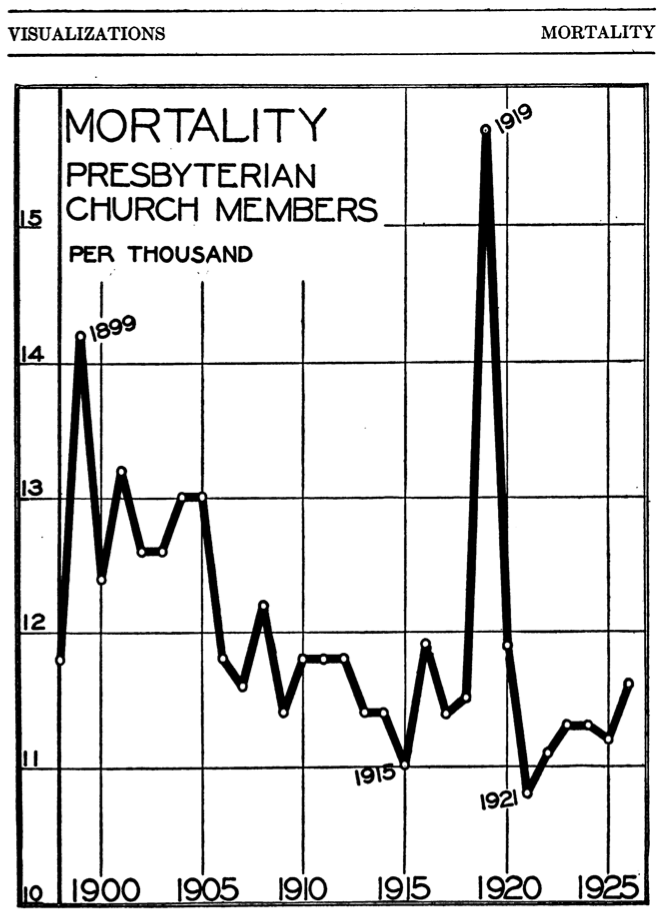 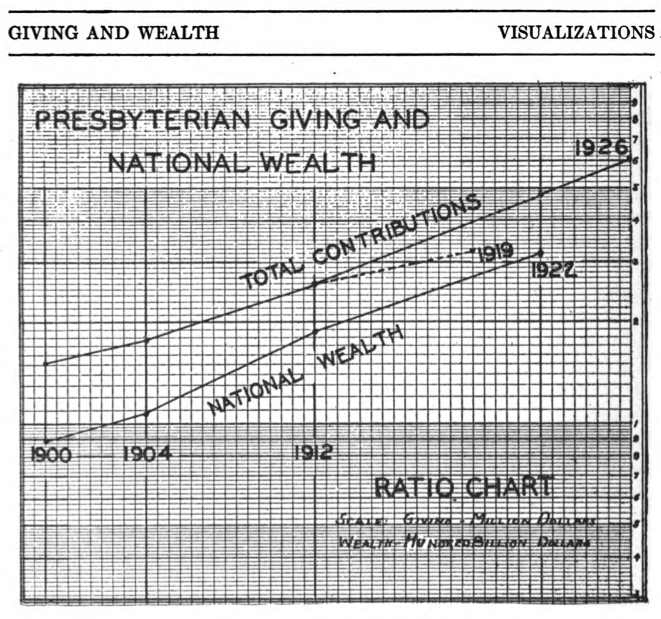 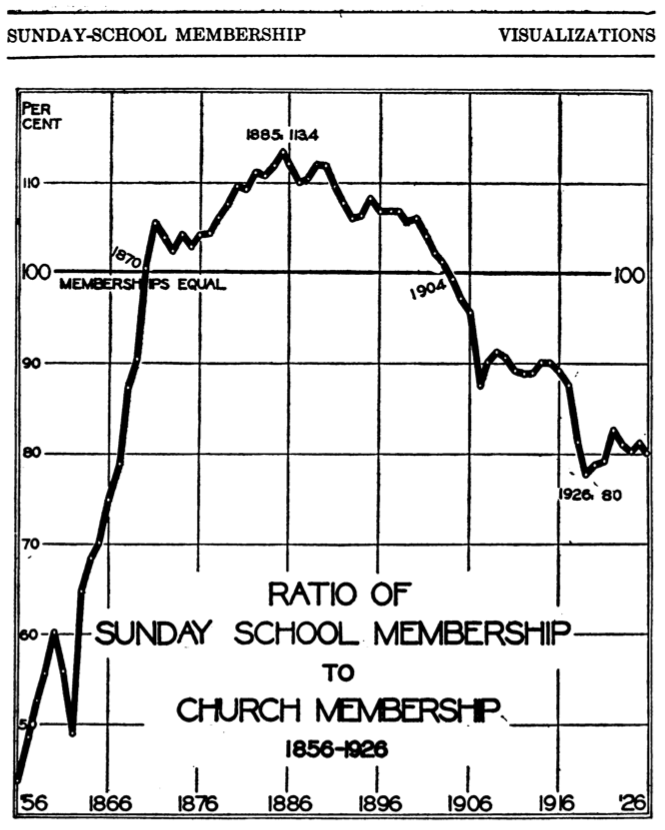 Weber’s visualizations were part and parcel of a broader uptick in statistical enumeration and visualizations in the early twentieth century. Two examples. W.E.B. DuBois included statistics of black churches in the visualizations he created for the 1900 Paris Exposition. (Examples here, and recently republished.) In 1906, as part of broader professionalization and expansion of the Census Bureau, the Census of Religious Bodies was added to the population and manufacturing censuses.

Broadly speaking, statistics of religion served at least three purposes. The first was that numbers were a useful rhetorical device. For instance, when Robert Baird mentioned numbers in Religion in America or when Lyman Beecher brought them up in A Plea for the West, those figures served the purpose of either celebrating the rise of evangelical Protestantism or stirring up fears of Roman Catholic dominance. Shari Rabin has written about how American Jews used numbers rhetorically in a fascinating article. (In my book on conversion, I tried to end each chapter discussing such rhetorical counting up of converts.)

A second purpose was to conduct the business of a church or denomination. Of course, baptismal and other sacramental records had been kept for that purpose for many centuries. But in the United States, membership data was also used to determine representation to denominational governing bodies, not unlike the federal population census, whose purpose was to determine Congressional apportionment.

Weber’s book and efforts like it at the start of the twentieth century served a third purpose: a guide to the present and future. Weber claimed that his statistical research “has been especially welcomed by business men in the eldership and has led to to a new emphasis on laymen’s responsibilities.” And—though somewhat hesitantly—he claimed “that they approximate a record of successes and failures in the past” and so were “the best signposts we have, though they may be a trifle hard to read.”

Check out Consolation Prize, a new podcast from RRCHNM. It tells the always surprising stories of diplomatic consuls, and through them the history of the United States in the world. Readers of this newsletter might especially enjoy episode 4, which features historian of American religion Leigh Eric Schmidt among other guests. The subject is Alexander Russell Webb, a convert to Islam who became a Muslim missionary to the United States. I’m not involved (though I know the principal on the project) but I’m told that the next episode will be about consuls in Jerusalem and the American obsession with the Holy Land.

Working on: Some initial exploration of citations in historical legal cases.

Playing: I can play C, D, G, E minor, and A minor chords. I can even play them one after another, if you don’t mind waiting ten seconds in between.

Otherwise, I’m doing everything I can to get this semester in the can as quickly as possible, even though it went better than expected.

You just read issue #8 of Working On It. You can also browse the full archives of this newsletter.