One of my favorite things about where I live is this view: 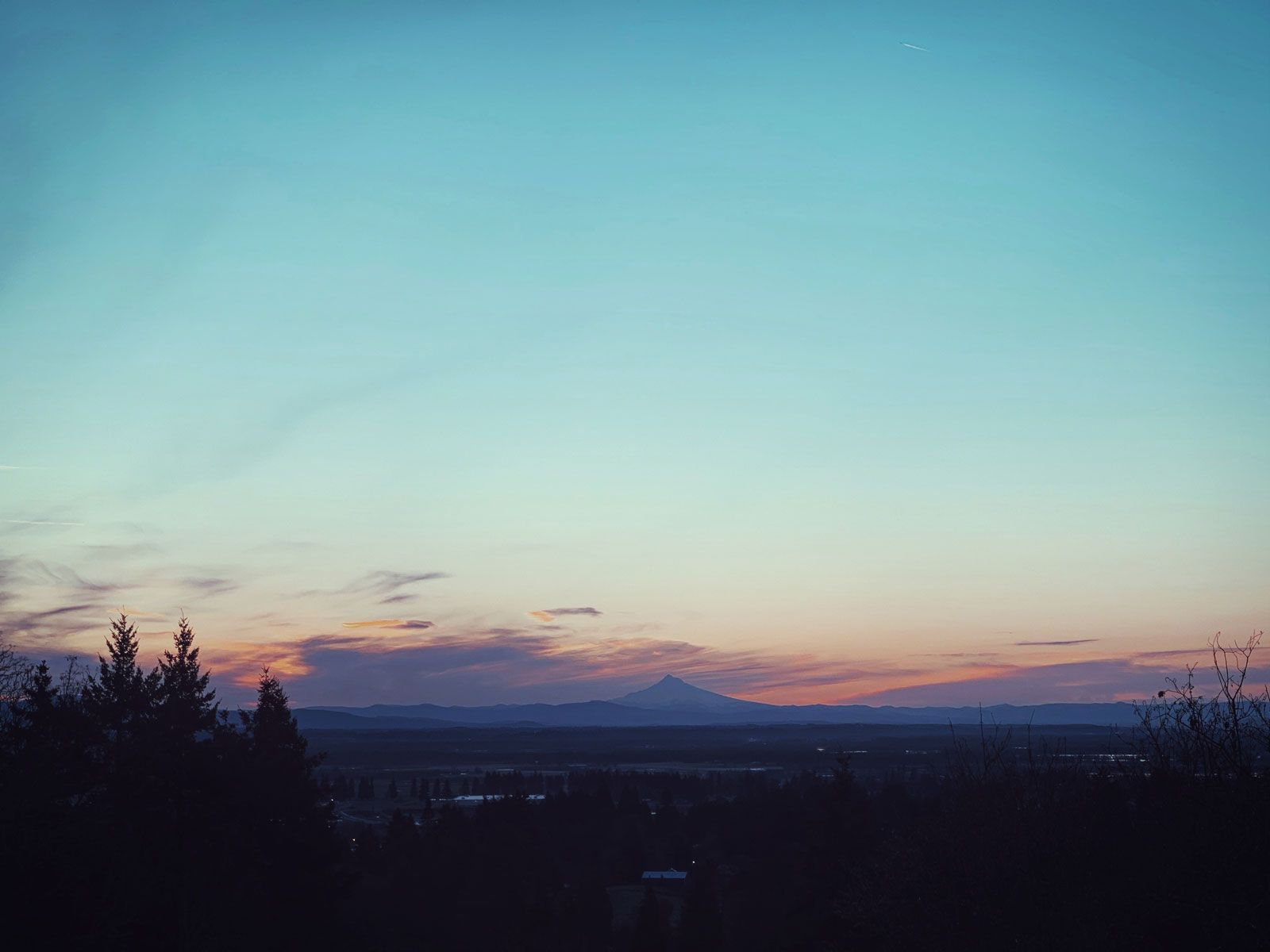 Each morning I sit at our dining table and, over breakfast, do a little reading, a little writing, before I head downstairs to my windowless study to work on a book, then spend the day doing design work. It’s hard to look at that view and not recognize that we live on a planet. Can’t quite see the horizon curve, but it gives me pause now and then. Reminds me of how small we are, how big everything above that horizon really is.

But mostly I think about how goddamn steep this hill is.

The author Haruki Murakami is a runner. He’s written a whole book about running (it’s really about writing). In an interview he once said:

The most important qualities to be a fiction writer are probably imaginative ability, intelligence, and focus. But in order to maintain these qualities in a high and constant level, you must never neglect to keep up your physical strength.

When the pandemic began, Felicia and I would take walks together. We’d leave the house, stagger down the steep grade—well, I’d stagger, she’d glide—and then torture ourselves upon reaching the bottom: We’d hook around a corner, then climb another long hill, then turn around, stagger back down, and then, thoroughly exhausted—I was thoroughly exhausted, she was barely pink-cheeked—we’d begin the long climb up our punishing road. I loved these walks: We’d talk—well, she’d talk easily, and I’d cough up words between gasps—and hold hands and just enjoy a little time together. But eventually I tapped out. This fucking hill is murder.

Lately, though, the universe seems to be goading me. Everywhere I look, I encounter writers talking about the importance of going for walks.

My father was a very disciplined and punctual man; it was a prerequisite for his creativity. There was a time for everything: for work, for talk, for solitude, for rest. No matter what time you get out of bed, go for a walk and then work, he’d say, because the demons hate it when you get out of bed, demons hate fresh air. So when I make up excuses not to work, I hear his voice in my head: Get up, get out, go to your work.

I could almost stop the quote there, but what she says about her father next is an important asterisk, don’t you think?

Since he was a man, he could carve out this life for himself that was extremely controlled. He had nine children by six exceptionally talented and brilliant women, but of course it was the mothers who took care of the children; he had his hands full being a genius. A woman could never have made the choices he made.

There’s a whole other newsletter in that bit.

In Ferris Jabr’s New Yorker piece about writing and walking, he says this about the poet William Wordsworth:

Thomas DeQuincey has calculated that William Wordsworth—whose poetry is filled with tramps up mountains, through forests, and along public roads—walked as many as a hundred and eighty thousand miles in his lifetime, which comes to an average of six and a half miles a day starting from age five.

How vain it is to sit down to write when you have not stood up to live! Methinks that the moment my legs begin to move, my thoughts begin to flow.

Nicole Bianchi, in her essay about how a daily walk can boost creativity, shared this take, from the philosopher Søren Kierkegaard:

Above all, do not lose your desire to walk: every day I walk myself into a state of well-being and walk away from every illness; I have walked myself into my best thoughts, and I know of no thought so burdensome that one cannot walk away from it.

She also cites Ernest Hemingway and Ralph Waldo Emerson as avid walkers, who walked to work out their thoughts. Emerson referred to a walk in the woods as having the “breath of immortality” in it.

In her newsletter Ask Polly, Heather Havrilesky interviewed Austin Kleon, who said a daily walk was his most important habit:

My wife and I start from our house in the morning and walk about a mile and a half or two miles, then turn around, so a total of 3-4 miles each day. No set destination, and we switch up which direction we walk. We walk solo on weekends when my kids aren’t in school. (We used to push them in a double stroller, but they’re too big now.) We talk about everything on these walks, do a lot of bitching and moaning and dreaming and planning. Then we try to leave whatever was said out in the air.

May Wong wrote about a Stanford study that drew clear connections between walking and creative thought:

The study found that walking indoors or outdoors similarly boosted creative inspiration. The act of walking itself, and not the environment, was the main factor. Across the board, creativity levels were consistently and significantly higher for those walking compared to those sitting…

A person walking indoors—on a treadmill in a room facing a blank wall—or walking outdoors in the fresh air produced twice as many creative responses compared to a person sitting down, one of the experiments found…

The study also found that creative juices continued to flow even when a person sat back down shortly after a walk.

“Every day a word surprises me,” he once commented, beaming, apropos of nothing other than that a word had suddenly popped into his head. Often this happened while swimming—“ideas and paragraphs” would develop as he backstroked, after which he’d rush to the dock or pool’s edge to get the words down on paper…

The filmmaker Quentin Tarantino also learned to rely on a swimming pool as part of his process:

I started writing during the day time. I get up, so you know, it’s 10:30, or 11:00 o’clock, or 11:30, and I sit down to write…Like a normal workday, I would sit down and I would write until 4, 5, 6, or 7. Somewhere around there, I would stop. And then, I have a pool, and I keep it heated, so it’s nice, so I go into it…and just kind of float around in the warm water and think about everything I’ve just written, how I can make it better, and what else can happen before the scene is over, and then a lot of shit would come to me, literally a lot of, a lot of things would come to me. Then I’d get out and make little notes on that, but not do it, and that would be my work for tomorrow.

In a podcast interview with The Japan Times, Craig Mod suggested another reason that walking is so important to creative work:

Boredom is everything, man. I think our loss of boredom in contemporary society is one of the greatest weird, ambient losses. It is one of these things that it’s very hard to quantify the value of it. And we’ve lost it so completely and totally that we very rarely have moments to even re-experience it, unless you do it intentionally. And so for me, yeah the boredom of these walks is, I would say, 50% of the value of it. It’s forcing yourself into a place where you’re not teleporting mentally. You just have to be there.

Over the last couple of months all of these perspectives (and many more I haven’t recounted here) have winnowed their way into my daily reading. The takeaway seems clear: I have to make my peace with that goddamned hill.

That, or maybe I’ll just venture into our garage more frequently, and climb on the treadmill. The hill can go to hell.

Future me will report back on my progress, or lack thereof.

In the meantime, enjoy this video of a man playing the banjo for a curious fox.

Thanks for subscribing to Letters from Hill House! You’re reading the free edition.

Note: This newsletter may contain affiliate links for which I earn a small commission from qualifying purchases.

You just read issue #71 of Letters From Hill House. You can also browse the full archives of this newsletter.