when you travel, all time seems to compress

I am running through Beijing’s South Rail Station. Half tripping because my suitcase refuses to roll straight; the swivelling mechanism on the bottom right wheel has been broken for years. My eyes are trained on the train information board that looms over the departure hall. I am near platform 15B. I’m looking for 10A. I look back down and just miss bowling over an old woman. My train is four minutes away from leaving, and I am not on it.

Time standardization began in the middle of the 19th century with railroads. Before that, time had been a hyperlocal thing: you were told it was 3:30pm in your town based on the clock tower at City Hall, but simultaneously it could be a different time in another place not too far away. This was local time. It was a complete mystery what time it should be in another town thousands of miles away. But the railroads needed their passengers to get on trains on time, and so they first created schedules, then the standardized time zones that we use today.

The G3 train to Shanghai is scheduled to leave at 2:00pm. I had reached the station half an hour before, thinking with my American train brain that I had enough time to pick up my ticket and get on my train. I should have been there at 1. The long lines to enter the station (foreigners can’t use the automated ID checking machines) meant that I only truly entered with 10 minutes to spare, and I still needed to pick up a printed ticket (foreigners aren’t allowed to purchase tickets online).

Every night is spent planning for the next day.

I lie in pitch darkness in the hotel room, my face illuminated only by my phone. I am immersed in silence, save a low rumble from the other bed, where my dad is sound asleep. Occasionally, a soft pattering passes outside the door as other guests head to their own rooms. Meanwhile,

I am jabbing at my screen, we’ll start with breakfast at a highly-rated steamed bun place, two subway stops away so we must head out by 7:30, I wish these restaurants had websites with menus, how am I supposed to check if they have vegetarian options?, perhaps we should even leave at 7, this place is known to have long lines, did my parents refill their subway card?, my dad is going to insist on paying the metro fare using QR code, we will go to a museum in the adjacent neighborhood after breakfast, leave the museum at noon to make our lunch reservation, oh must remember to fill our water bottles before heading out, lunch is at a Yunnan restaurant, I do hope they have vegetarian dishes, I’m positive the breakfast place only has pork buns, we can shop after lunch, there are some trendy hutongs nearby, well really my sister will shop, I will fight jetlag in a cafe, then back to the hotel at DengShiKou, we’ll change for the evening show, where is the National Center for the Performing Arts again?, the website doesn’t list a dress code, I certainly didn’t pack anything formal, that’s just as well, we would be grabbing light snacks at the Niu Jie night market, I wouldn’t want my nice clothes stained anyway, let’s review the day, is this all we can handle, could we squeeze in a detour to the former house of Soong Chingling?, let’s bring umbrellas it is going to rain.

I am saving all the places highly-rated by local influencers. I am adding little clusters of orange markers on the map of Beijing. Let a hundred orange clusters blossom. Travel plans emerge. A morning at the western cluster, noon at the south one. The one further north looks sparse and dispersed. We will skip that.

The last time I was in China was 9 years ago. Before that, 17 years ago. When will I next return? What will Beijing and Shanghai be like then? Best see everything now while I can. When travelling, all time seems to compress. A lifetime of a city into four days. A country into eight. 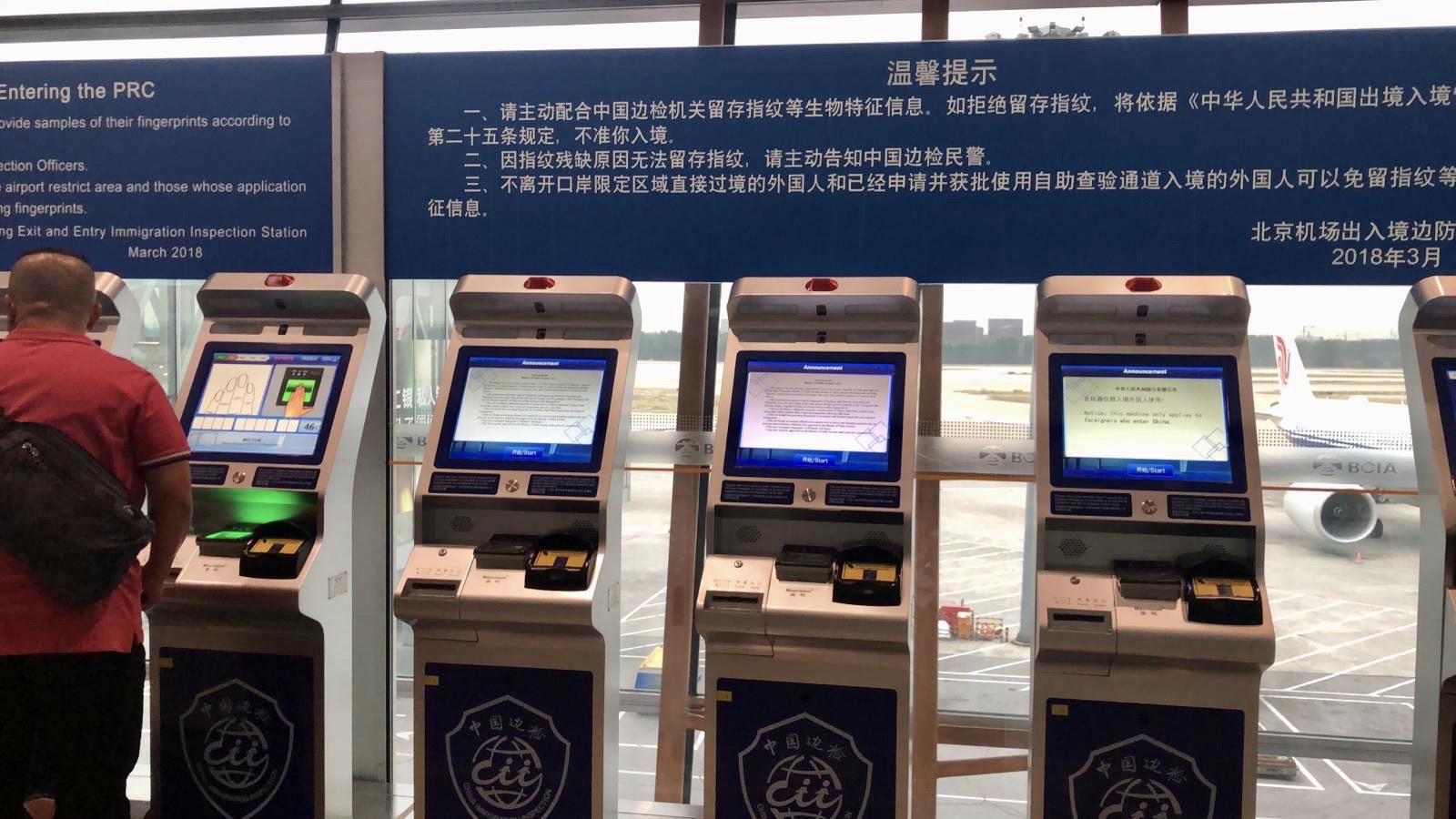 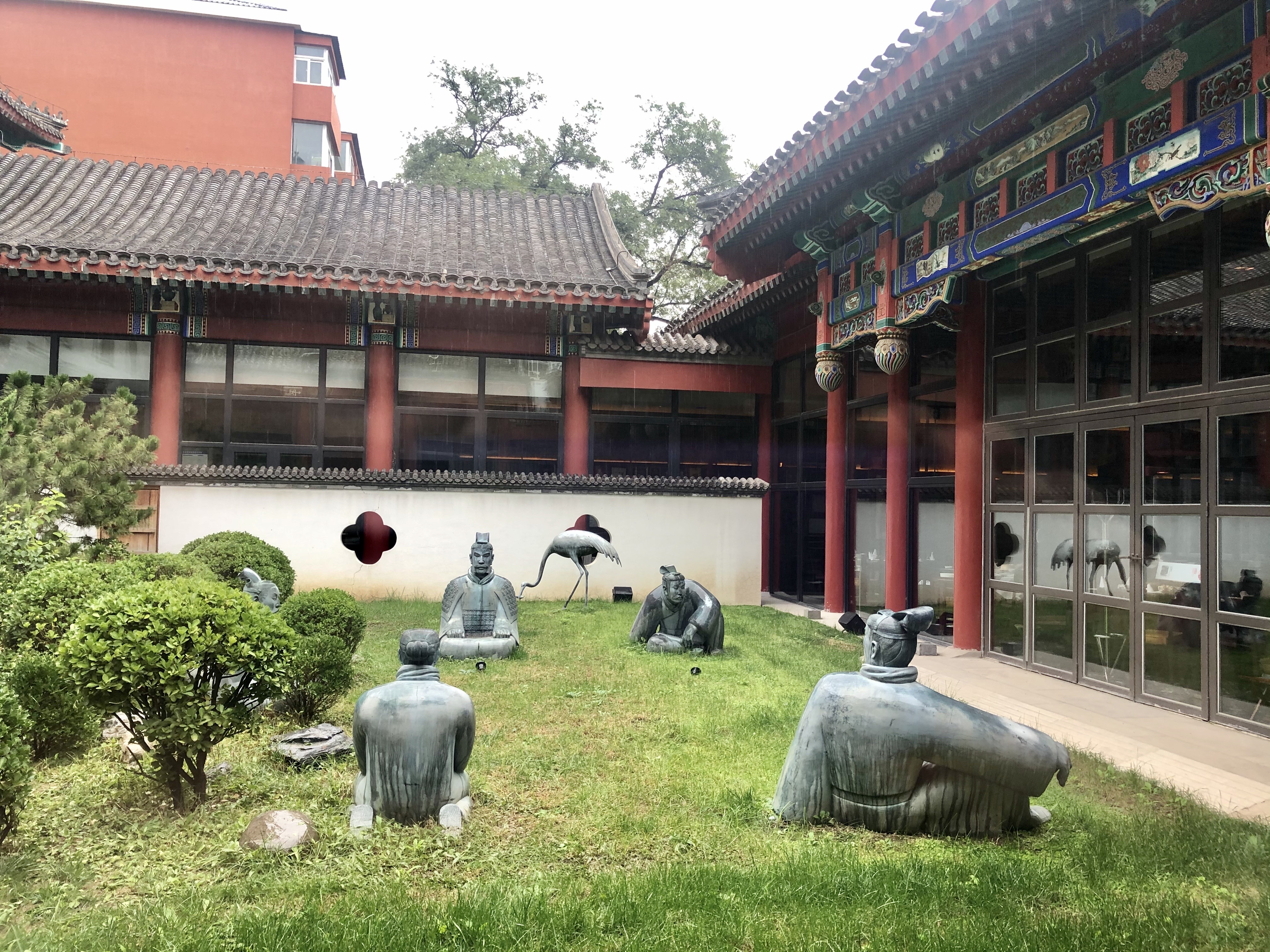 Over a breakfast of steamed buns, we tune in to the Democratic debates in Ohio. It creates a weird dissonance, American accents and issues in a Beijing hotel. On screen, Beto defends his gun buy-back policies; here in China citizens are not allowed to own firearms. Biden wags his finger about America turning its back on Kurdish allies in Syria; meanwhile China forges ahead with its One Belt One Road program, investing heavily in its neighbors.

There is something odd about watching a night time television program while the morning sunlight streams in as the city stirs to life. Here, I’m careful not to send emails in the afternoon, knowing that they reach American recipients while they are asleep. At night, my phone buzzes constantly with work chatter as I drift off.

I inhabit two time zones at once.

6:30am. The line at a famous scallion pancake stall. There are eight people in front of me, yet my wait is one and a half hours long.

I see why when I step up to the storefront. The speed of the line is dictated by the process of making the pancakes:

Ahead of me in line is an old woman. While the tourists in line grouse about the wait, she is silent, unfazed, patient. Is this how she spends an hour every morning?

An hour in the breakfast line for her.

An hour in bed, scrolling through my Twitter feed.

Why am I surprised? 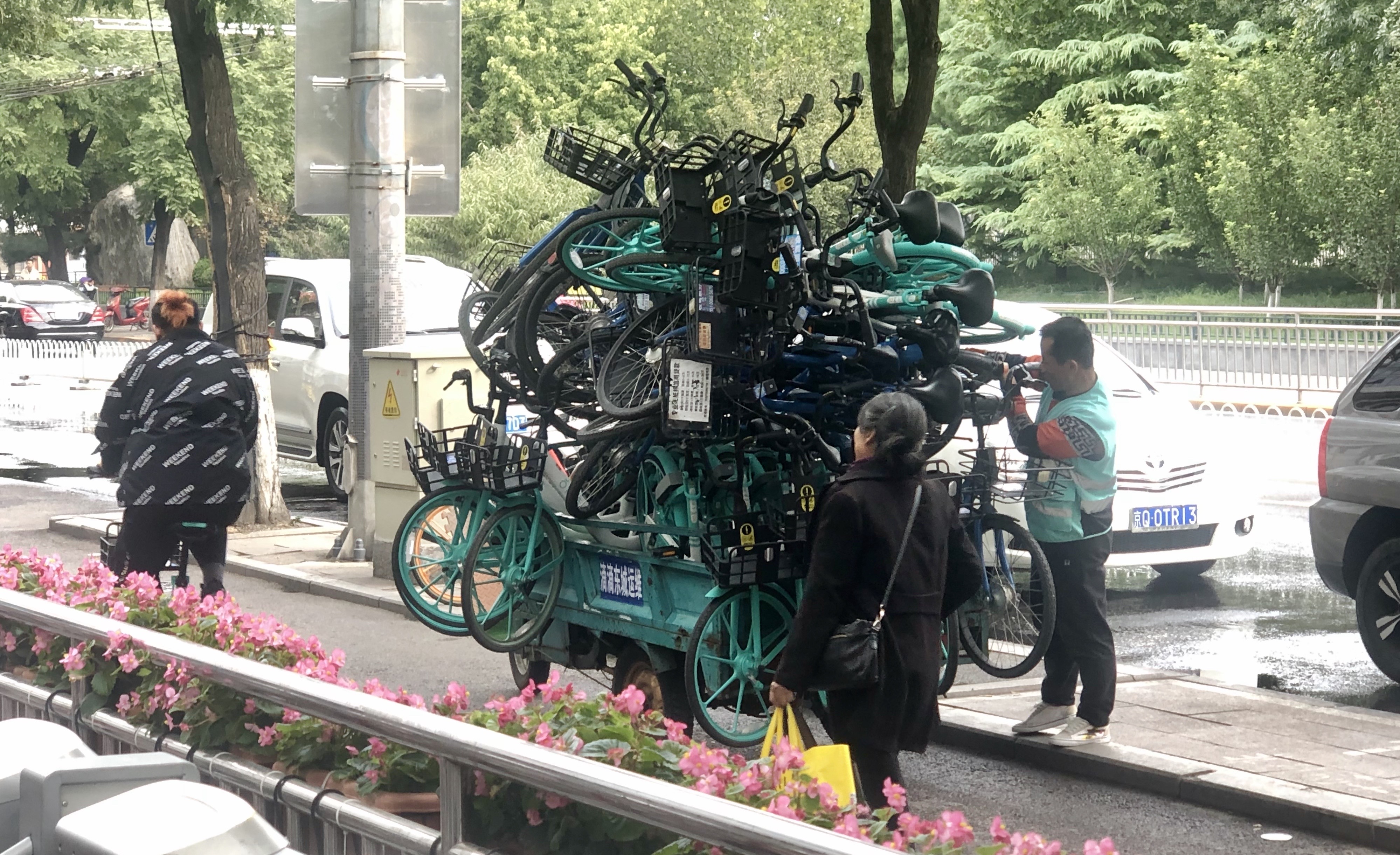 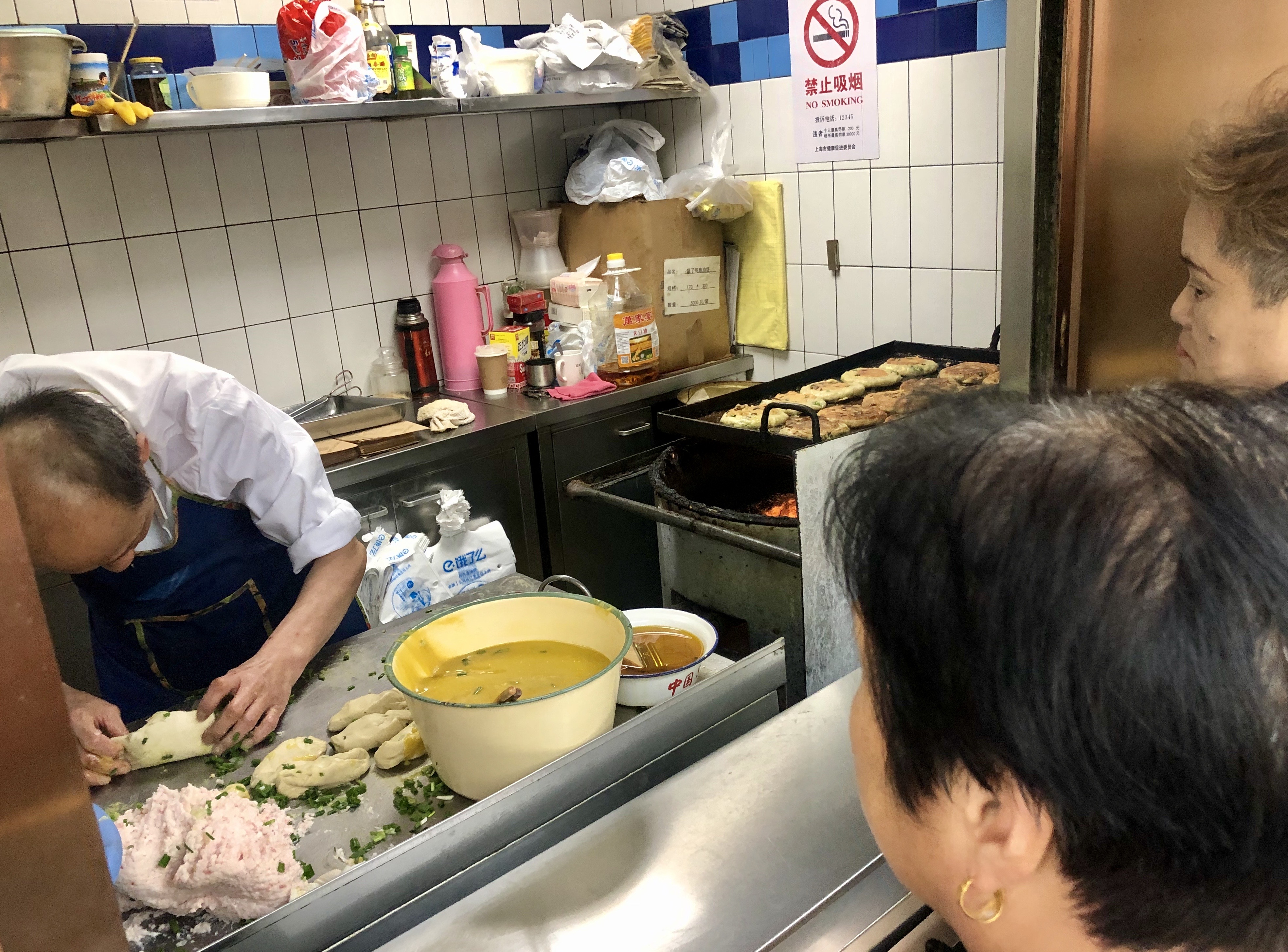 On my last morning in Shanghai, I am up early. I take a walk around the picturesque French Concession before heading to the airport. It’s a far cry from the bustle of the rest of the city. Shopkeepers are prepping their food. Street cleaners roam the sidewalks with their bamboo brooms. I pass a bus stop, and I freeze. The time on the bus display says 8:49. It takes me a few panicky moments to realize that it is the clock on the display that has stopped.

For a brief moment, the serene morning has been wrested from me. I am thrust back into the fluster of the first day. 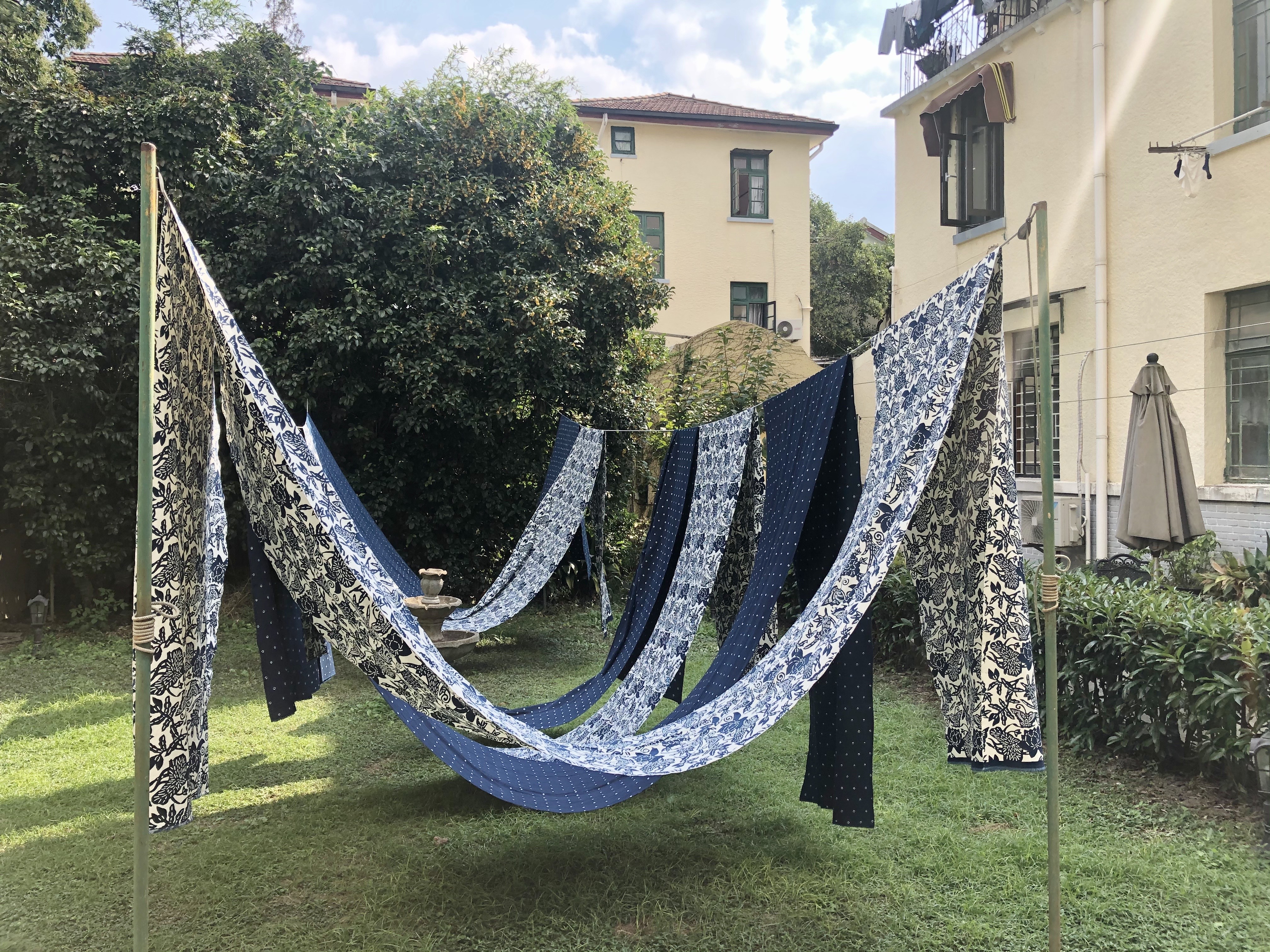 You just read issue #1 of SOTU. You can also browse the full archives of this newsletter.