Why and How I started public speaking

Some stories and some advice from an international speaker and trainer 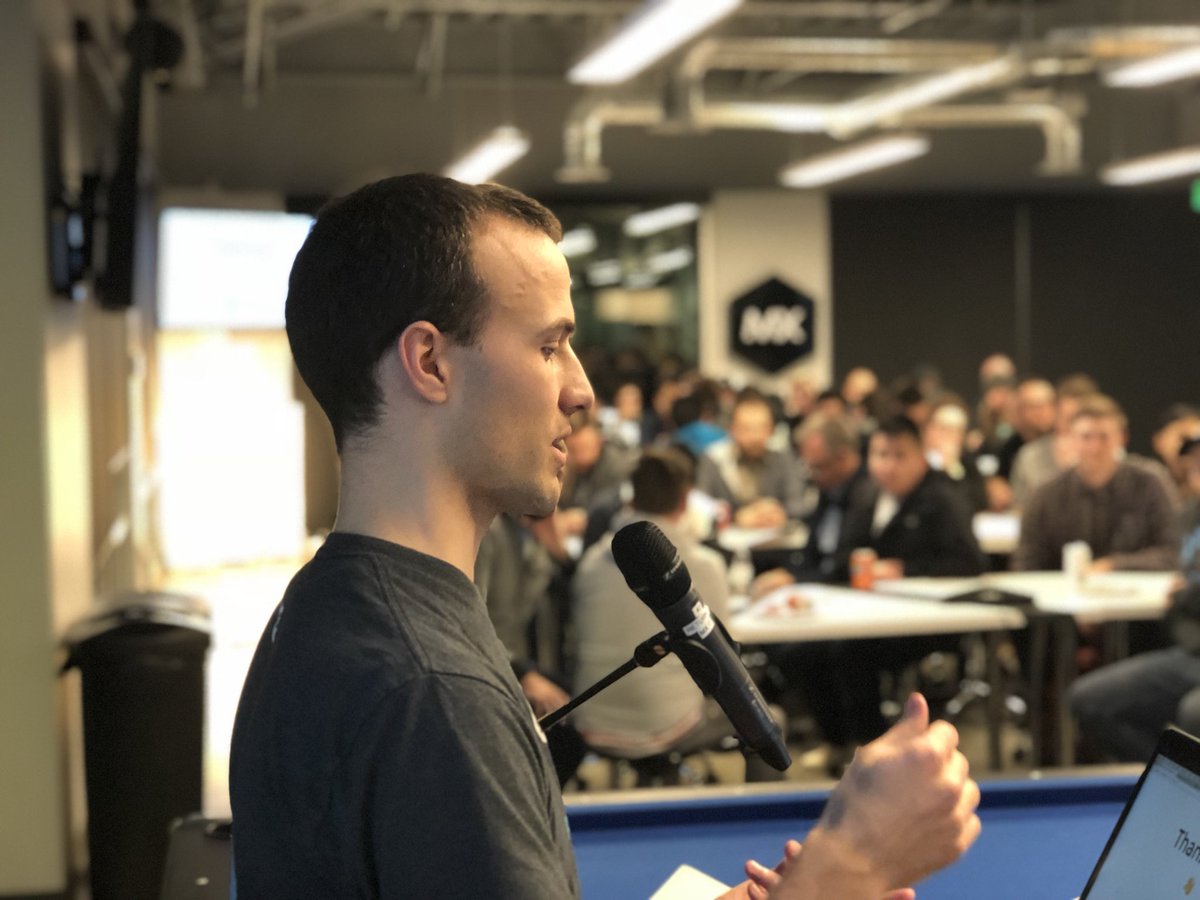 When I was still in school in the Information Systems program at BYU, I discovered and started listening to JavaScript Jabber. At the time, Jamison Dance was on the show and also the organizer of the local JavaScript meetup. I remember him mentioning the meetup on the show and thought it’d be really cool to attend and learn from others (which it is!).

So I looked up the meetup page he mentioned and noticed that there was an opening for a speaker. I had just gotten back from the first ng-conf (2014) and thought that whole public speaking thing looked like a lot of fun. I also had been working on a personal open source project on the side called geniejs (which was part of how I eventually got my first job) and thought if they needed a speaker I could talk about genie! So I offered to fill their slot:

And just like that, the first meetup I attended I was a speaker. Turns out meetup organizers are often willing to give a speaking slot to anyone who so much as sneezes in their direction because speakers are surprisingly hard to come by on a monthly basis 😅

So there’s the history of how I got started with public speaking in tech. So why did I do it? I can think of two reasons:

I know a lot of people think that public speaking is worse than death. How on earth could I think it’s fun? Well, if you don’t mind, let me give you a little context into my childhood…

Ever since I was a little child, I’ve been speaking in front of groups of people. As a child, I spoke in my Church’s primary program (in front of a handful of adult instructors and a few dozen of my peers) a dozen times or so. When I was a teenager, I had a speech class in school, started giving short talks in my seminary classes, and gave 5 minute talks in front of my entire church congregation (a “Ward” consisting of ~200 people). By the time I moved out of my home at 18, I had probably given 40 talks of various lengths and on various subjects (though most were religious in nature). During that time I also gave ~15 minute lessons to my family in family home evenings, and led lessons in my church classes as well.

In Junior High and High School, I was also a stage performer. I played the piano (yes, I’m hitting my head and forearm on the piano at ~2 minutes), sang in choirs, and I was in my High School’s Show Choir “Jive!” (yep, that’s me in the green doing a backflip at ~6:40). After leaving home and spending a semester at BYU, I left on a mission for my church and had even more opportunities to speak in front of people (both church congregations as well as teach lessons to people in their homes).

So why did I think it’d be fun? I guess it’s because I was privileged to grow up with opportunities that allowed the fears surrounding public speaking to fall away and all that’s left is the pure joy of sharing experiences and connecting with people in a big way.

I’m mentioning all of this in part for me to walk down memory lane, but also to illustrate that growing up, I spent a LOT of time in front of people. This will hopefully give you more context into the why and how I started speaking publicly at tech meetups and conferences, and hopefully will give you some ideas of what you can start doing today if that’s something you want to do more of as well.

Conference speakers normally have all expenses paid (as they should), so I started searching around for open conference CFPs (Call For Proposals) (I used Lanyrd, but I think confs.tech is probably better these days. I’m sure there are more… Google around 😉). I wrote a dozen or so proposals about subjects that I knew I could write and deliver a fun and informative talk from. I submitted them to every relevant conference I could. One conference I was accepted to was Jfokus which is in Stockholm, Sweden (a fact that I realized only after I’d been accepted 😅). They invited me to give a workshop as well and that’s how I got my first paid workshop gig. (Another story is the fact that speaking at a meetup was how I got my gig at egghead.io as well).

I was able to attend a ton of conferences. Too many actually. As awesome as it was, it started to negatively impact my family and work. So I’ve pulled back considerably, and now I have to be a lot more picky about which conferences I’ll submit to.

So why do I speak at meetups and conferences now?

How did I get into public speaking?

I really hope this is helpful to you. I definitely still get nervous before speaking, just like I was always nervous before performing in stage or speaking in church as a kid. That never goes away. But the more practice you get, the more able you will be to take that nervous energy and turn it into positive energy to get the audience engaged which will help you connect with them better. Keep practicing! Good luck :D

Learn more about “self improvement” from me:

> Folks have been telling me I should make a course about (the good side of) personal brand marketing / self-promotion. Let me know if you’d be interested in this.

This week’s blog post is “unpkg: An open source CDN for npm”. It’s the published version of my newsletter from 2 weeks ago. If you thought it was good, go ahead and give it some claps (👏x50) and a retweet: 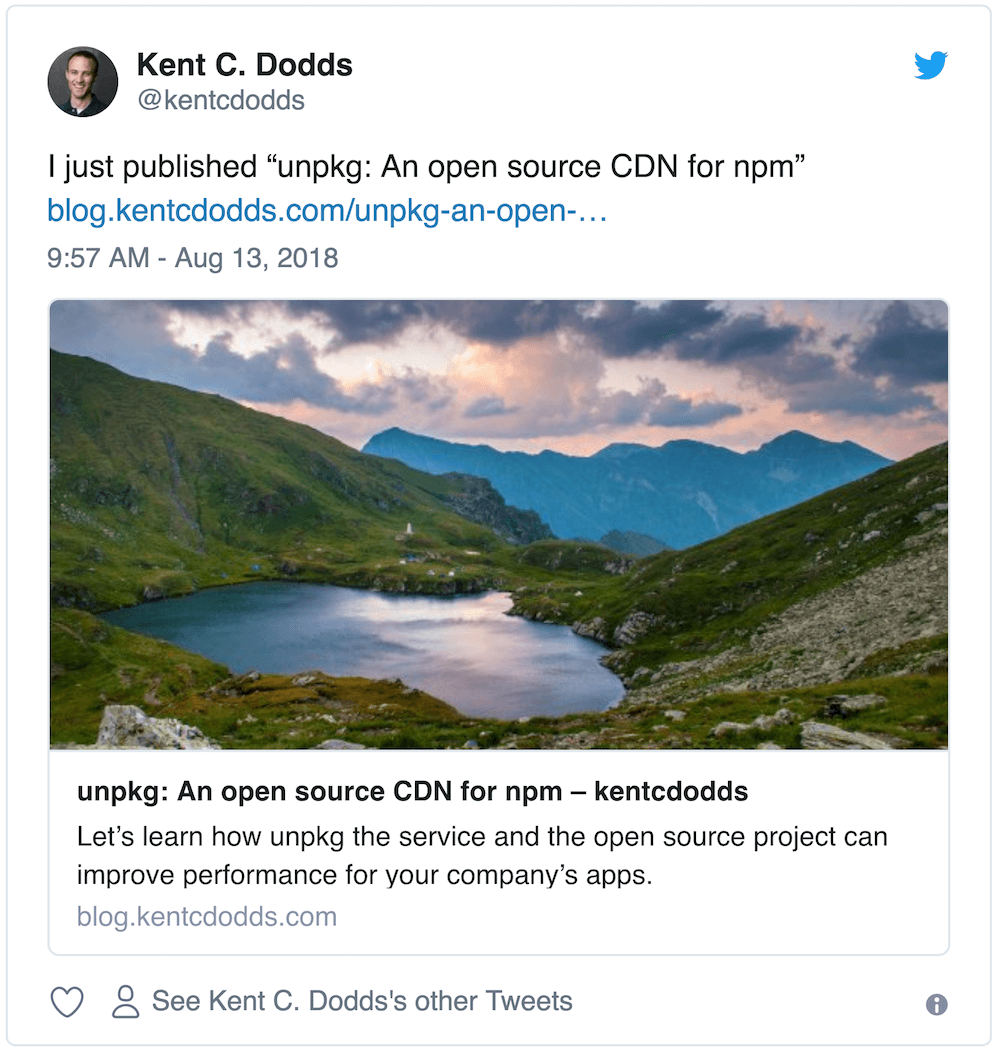 You just read issue #18 of Kent C. Dodds News. You can also browse the full archives of this newsletter.