React Hooks are currently available in the alpha release of react@16.7.0-alpha.2.

This is the first example on the https://reactjs.org/hooks documentation:

That const [count, setCount] = useState(0); is the line we’re going to be talking about today. The syntax here is called “array destructuring” and it was introduced into JavaScript in the infamous (more than famous) ES6 release.

I’m a firm believer that:

The better you understand an abstraction, the more effective you will be at using it. – me, literally right when I wrote this…

So when I see syntax that I’m unfamiliar with, I like to read about it and understand how it works with the rest of the language. The problem is that it can be difficult to “Google” syntax. Seriously… Try Googling the syntax itself as if you didn’t know that it’s called “destructuring.” Pretty tough! So here’s my trick. I go to astexplorer.net and paste in the code that I don’t understand: 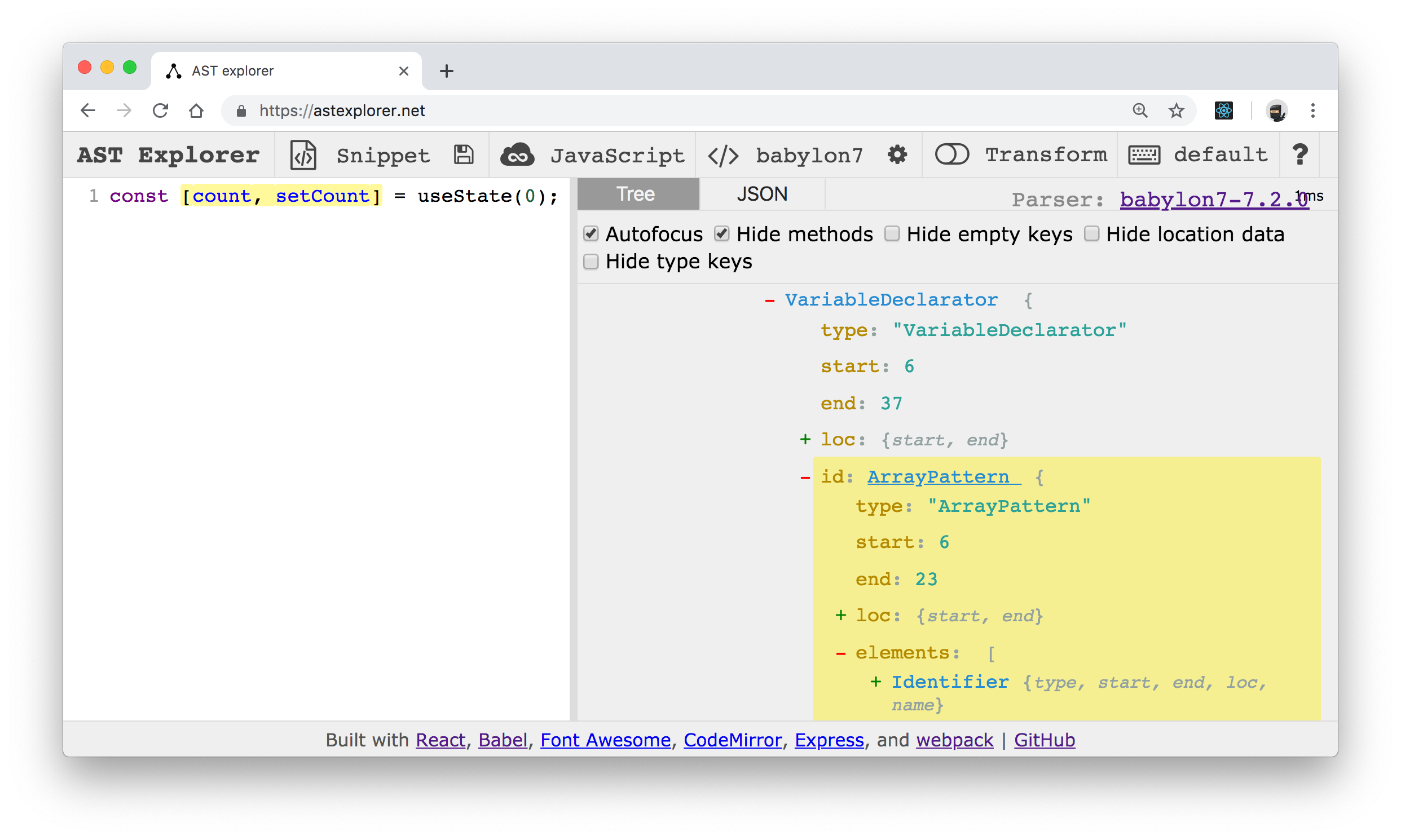 Cool! Babel calls that an “ArrayPattern.” So let’s go ahead and Google for that. We’ll search for “site:https://developer.mozilla.org array pattern” (that way Google only returns results for articles on MDN which is a terrific resource on learning everything there is to know about JavaScript).

Sweet, the first result takes us to “Destructuring assignment” where we can learn all about this feature (I guess you can read that instead of continuing here if you want to 😅).

In computer science, syntactic sugar is syntax within a programming language that is designed to make things easier to read or to express. It makes the language “sweeter” for human use: things can be expressed more clearly, more concisely, or in an alternative style that some may prefer.

Ok, so basically it means that there are common patterns or ways to write code in a given language, so the language makes a syntax feature to make that pattern require less code or more expressive. With this in mind, when I’m learning new syntax, I like to “de-sugar” the syntax to see what it would look like if we didn’t have that feature.

Luckily for us, we have Babel and TypeScript which can compile this newer syntax into something older browsers can support (and presumably to something we may be more familiar with). So my next step is to go to the online babel REPL and paste in the code. Here’s what the result looks like:

😬 YIKES! Hmmm… Ok, so sometimes Babel uses utilities which both make it more compliant to the specification, but also can make the code a little harder to understand. Luckily, there’s an option on the Babel Repl’s “Env Preset” called “Loose” which will simplify this output considerably:

😌 Phew, that’s better. Ok, so what’s going on here. Babel’s taking our one line and rather than using the Array Pattern thing, it’s assigning the return value of useState to a variable called _useState. Then it’s treating _useState as an array and it assigns count to the first item in the array and setCount to the second one.

Let’s play around with this a little bit to explore the syntax:

Can I call the values whatever I want?

Can I add more elements?

Can I pull out fewer?

Can I skip one?

Can I skip more?

I saw someone put a weird = sign in there, what does that do?

Oooh, fancy, so if the first element of the array is undefined, then we’ll set count to 3 instead. Default values! Sweet.

Note: most of the things above you would never need to do with useState because we can always rely on useState returning an array of two elements! We’ll look at that more next.

Ok cool, so this helps us understand what’s actually going on. There’s nothing React-specific about this syntax. It’s built-into the JavaScript specification, and React’s useState hook is leveraging it as a mechanism for an ergonomic API that allows you to get two values out of a single function call. Neat!

Ok, so what does useState actually do then? What is it really returning? It must be returning an array for us to be doing the array destructuring like this right? Cool, let’s check that out.

One thing that’s interesting is that the implementation of useState exists within react-dom rather than react. I know, that may be confusing because we import useState from the react package, but it actually just delegates to the current renderer (which is react-dom in our situation here). In fact, setState is the same way!

Another interesting thing about useState is that the implementation in react-dom is just a few lines:

😱 it’s actually just a hook that’s using the useReducer hook! Ok, but what is that basicStateReducer thing huh?

Ok, interesting, so useReducer is actually over 100 lines of code, so let’s just look at what useReducer returns:

See! It’s an array! So when we call useState, it returns a call to useReducer which will return an array of two values. This allows us to do the array destructuring that we want so instead of writing:

I hope you found this one helpful! Even if you already are very familiar with destructing syntax, the process of learning new syntax I show above has been helpful to me as recently as Friday when I was playing around with TypeScript. Seeing syntax that I’m not familiar with and learning new things is something that I’ll never get tired of in this industry! And learning the fundamentals behind these bits of syntax will make you more effective at using them. I should mention also that there are more things you can do with destructuring and if you’re interested there’s a section about destructuring in my ES6 workshop that’s available completely free on my YouTube channel. Good luck!

I got Refactoring UI - Complete Package by @steveschoger I’ve always felt like a dev that was helpless at design, but I watched all of Steve’s RefactoringUI videos on YouTube and I’m convinced this is going to be an extremely helpful resource for me.

I’m telling you people, this thing is nutso fast and couldn’t be easier. It actually feels like a hidden feature of Netlify it’s that good.

Legit used @typescriptlang (via @babel/preset-typescript) for the first time today and so far I’m quite happy. Will give more updates when I’ve worked with it more. But so far I’m pretty optimistic. Feeling better about it than I have with Flow…

This week’s blog post is “React Hooks: What’s going to happen to React context?”. It’s the published version of my newsletter from 2 weeks ago. If you thought it was good, go ahead and give it some claps (👏x50) and a retweet: 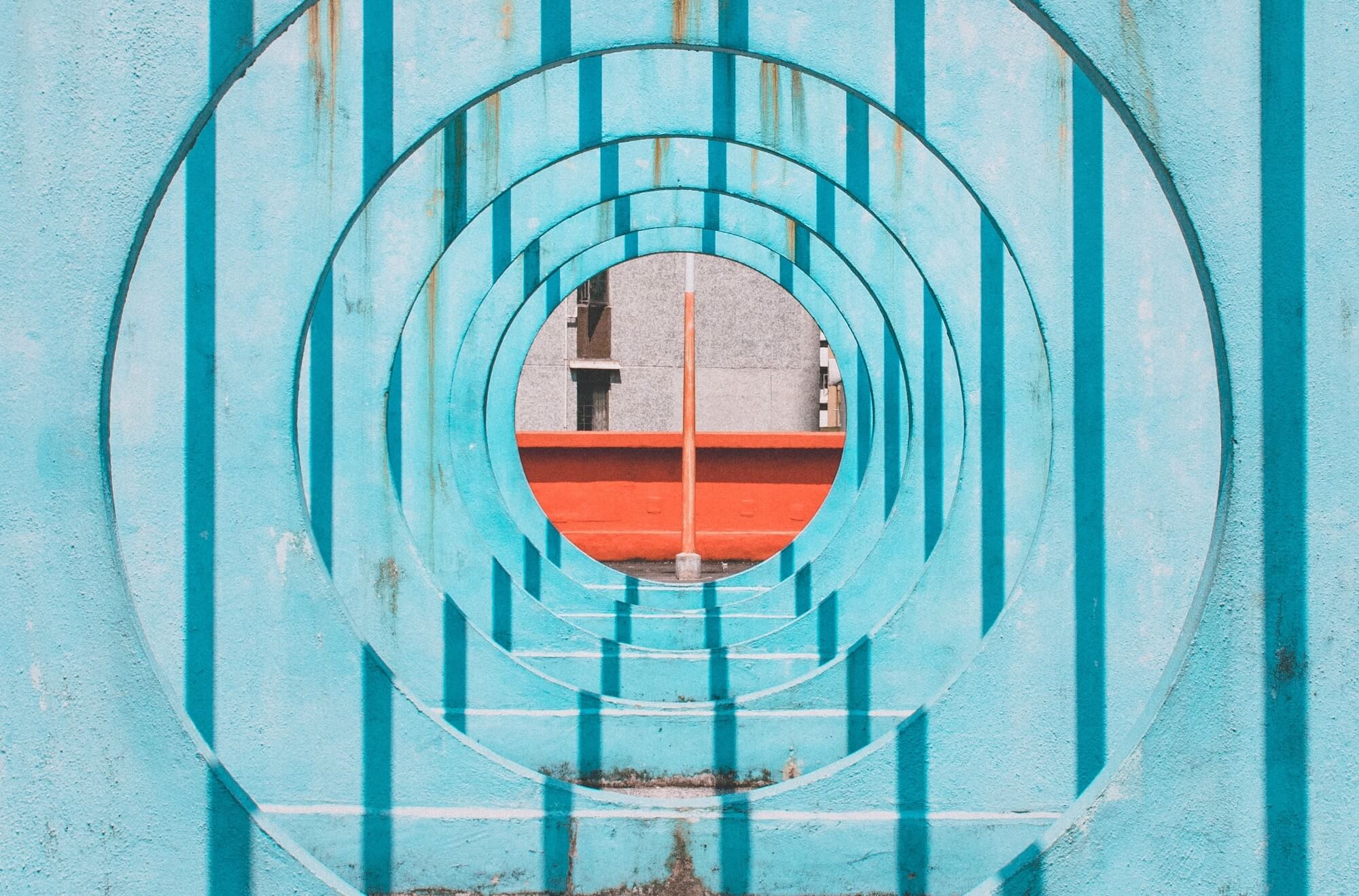 With the cool new stuff coming to React (Hooks/Suspense), what’s going to happen to the context api?

You just read issue #44 of Kent C. Dodds News. You can also browse the full archives of this newsletter.