One Attempt IX: it doesn't feel so smooth

Hi there! Hope you’re all well. I just got back from Portland, where I attended the XOXO Festival.

Years ago, I designed my business cards so that I could use the back to summarize my discussion with the recipient. Here’s my favorite one from this weekend:

I’m Josh Rubenoff, a designer and (former?) org culture enthusiast who also enjoys film. I use this newsletter to work and think in public and also to get super introspective.

It’s been 16 months since my last newsletter 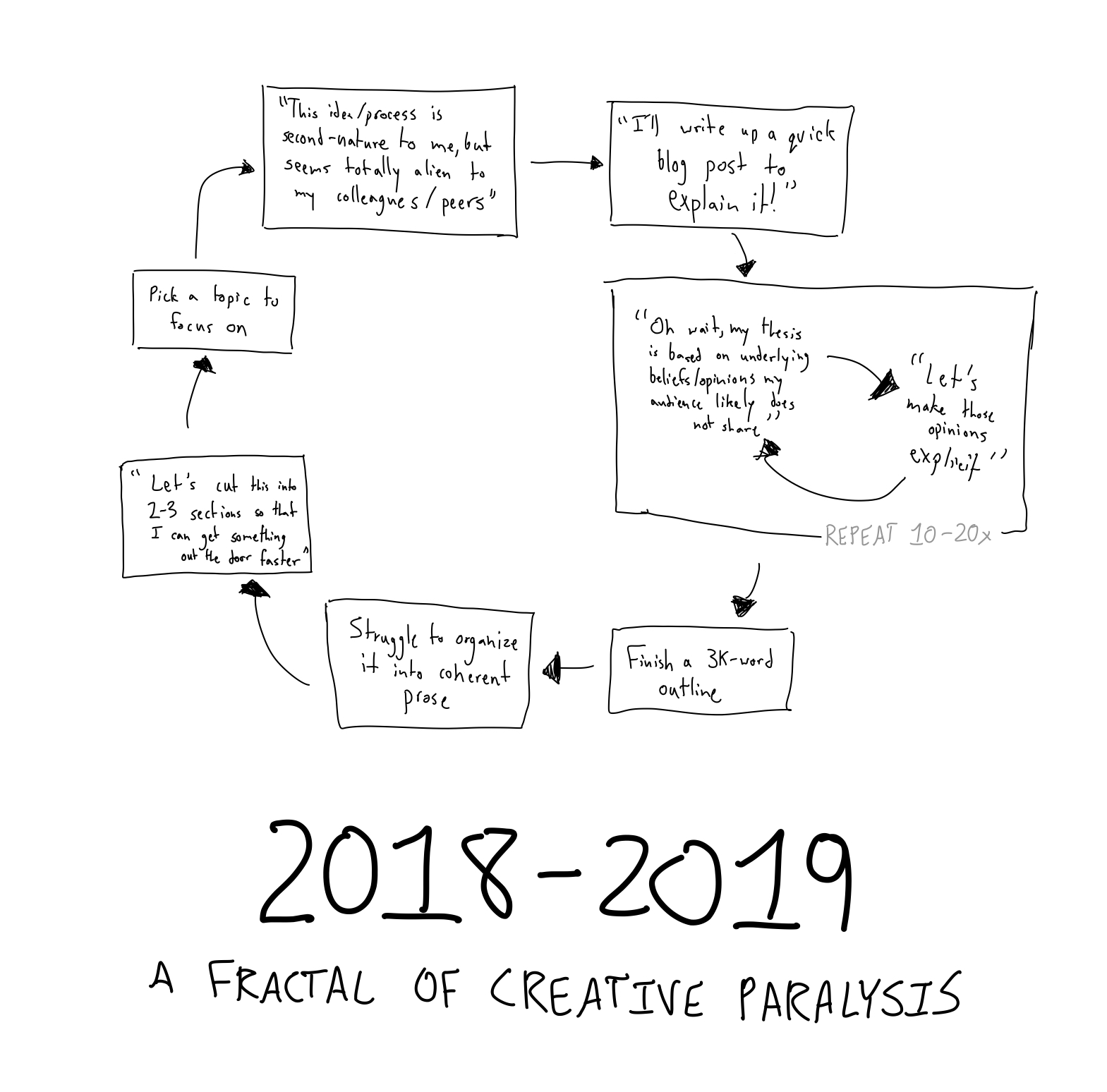 (You can click the image for a larger version.)

Not fun! I have 8–10K words worth of outlines that only Kari has ever seen. Will I show them to anyone else? Who knows!

I might write more about both XOXO and this flowchart in the future.

Things I’ve published in 2019 despite myself

In February, I wrote about how I define a designer’s role, and how that definition could change going forward.

One could argue that much of the social damage caused by big tech platforms stems from their universal application of their mission statements at massive scale. After a certain point, something like Facebook’s desire to “make the world more open and connected” has disastrous social effects that are beyond their ability to control.

Given this, you could imagine a future where the UX design community starts to see themselves as conservationists. We may see it as morally necessary to limit our own creations, pushing back against our employer’s ambitions where necessary to preserve the social fabric.

As an experiment, I also created mediocre.biz as a place to publish work in progress. My goal was to force myself to be less precious about my writing, but I realized it’s not super healthy to publish rough drafts under a big banner that says “mediocre.” So I think I’ll shut down the site soon and repurpose the domain for another idea.

Until then, you can read what’s on there now, including this appreciation of remote work:

I wasn’t necessarily in need of extra vacation. I liked my work, and was certainly learning a lot. But I was bummed out by everything that kept me in the office, but wasn’t actually work: pointless meetings, all-hands sessions that were more effective in alienating the team than bringing us together, and constant distractions from colleagues. It was easy to feel like I was wasting my life away indoors.

I go on to argue about how remote work makes teams more resilient, but I think I need to revise the thesis. My real point is about how I, personally, have found it easier to push forward positive culture change in remote teams. I realized a few thousand words in that I’m less interested in supporting a grand declaration than in summarizing my personal experiences here.

I also wrote about not staying in a bad job because you “want to make a difference.” Which, in hindsight, reads like I’m trying to convince myself of my own argument:

Your chances of making a difference entirely depend on the competence and experience of those around you, and the temperament of leadership.

Your ability to feel good about the difference you made depends on your leaders’ ethics, your org’s values, and its mission’s original impetus.

A few of the festival films I’ve previously mentioned here have since gotten U.S. distribution, and are available to rent and stream! Here’s everything I strongly recommend.

I Am Not a Witch is free with a library card on Kanopy, or a $1.99 rental on iTunes. Manages to be a powerful feminist allegory and a really fucking funny satire at the same time.

Angels Wear White is free with Kanopy and Prime, or a $4.99 iTunes rental. Last April, I wrote:

The only exploration of patriarchy, corruption, and child neglect in contemporary China that features both a beach resort and a gigantic Marilyn Monroe statue.

Minding the Gap is streaming on Hulu. It also got a ton of press last year as part of its Emmy and Oscar campaigns, so there are lots of interviews with the director to read / listen to after you’re done. Previously, I wrote:

There’s some powerful and moving stuff here about the intergenerational cycle of parental and spousal abuse, and how difficult it is to break if you’re never presented with alternative behavioral models.  One character, Zack, embodies this struggle, and he’s so compelling that he makes the film worth watching all by himself. He’s very evocative of all the fuck-ups I knew in my mid-twenties, who try to resolve their emotional dysfunction through unhealthy outlets while projecting a laid-back facade.

If you’ve read this far

We recently moved into a new place, and Kari said she’d like to buy a bidet. My reaction was to record these new NSFW lyrics to “Never Gonna Give You Up.” (They’re sung by me, but written from her perspective.)

Sorry in advance for the reverb (and content.) Hopefully, it will make you laugh… or at least say “what the fuck?”

If there’s anything you enjoyed in here, please reply! It always means a lot.

You just read issue #9 of One Attempt. You can also browse the full archives of this newsletter.