"The Christian Occurrence": Kierkegaard and Heidegger on Theology & Time

At the heart of Christianity is not a teaching but an event. Revelation is something that unfolds in time, and redemption is accomplished by what happens. This is something that philosophers have impressed upon me more than theologians.

In the Socratic (“idealist”) model, the time of enlightenment—coming to know what I had already known but forgotten—was merely an “occasion” because at that time of recollection, nothing really changes. In contrast, Kierkegaard says, in the Christian understanding the instant of revelation—and the time of one’s coming to appropriate that revelation—is a decisive “moment” that changes everything. “If the situation is to be different,” he says, “then the moment in time must have such decisive significance that for no moment will I be able to forget it, neither in time nor in eternity, because the eternal, previously nonexistent, came into existence in that moment.” Time and history are not just pseudo-stages to roll out some timeless truth, like some mock unveiling of an open secret; rather, the truth is born at the very intersection of time and eternity, like a chemical reaction that requires both components. “A moment such as this is unique,” Kierkegaard continues. “To be sure, it is short and temporal, as the moment is; it is passing, as the moment is, past, as the moment is in the next moment, and yet it is decisive, and yet it is filled with the eternal. A moment such as this must have a special name. Let us call it: the fullness of time.”

In 1927, a young Martin Heidegger—by that point already a student of Kierkegaard for a decade—gave a lecture on “Phenomenology and Theology” at the university in Marburg (with Rudolf Bultmann in the room). Musing on the nature and calling of theology, Heidegger emphasized that theology’s “topic” was not God but Christlichkeit—“Christianness,” the how of Christian existence. Theology, he emphasized, should reflect the very nature of faith, which is “not some more or less modified type of knowing” but rather a faith-full way of being in response to the event of revelation in “Christ, the crucified God.” Faith—the existential transformation called “rebirth”—is a mode of participating in the Christ-event.

Because of this, Heidegger doesn’t talk about “Christianity” as an abstraction. Instead, he speaks of “the Christian occurrence.” “Faith,” he says, “is an appropriation of revelation that co-constitutes the Christian occurrence;” it is, in technical italics that are nonetheless suggestive, “the believing-understanding mode of existing in the history revealed, i.e., occurring, with the Crucified.” The radicality of Heidegger’s argument is sort of buried in the prepositions here. Faith, he’s saying, is a how, a way of being, a “form of life” (as Hegel and Wittgenstein would say), that is primarily a call to live “in” the historical event of the Crucified—the life, death, resurrection, and ascension of the Incarnate God. To live “in” that historical event, though, is to live “with” the Crucified. This way of living into an event is fundamentally about communion with the Crucified God. Whatever else we might say about it, the Christian life is a way of life that lives as if this history still matters—to live as if this history is now, and that this history is my history.

This is why, Heidegger argues, that all theology must be, fundamentally, historical. If the topic of theology is Christlichkeit, and if Christianity is more properly Christian existence, living in light of “the Christian occurrence,” then carving up theology into systematic loci is an evasion of historicity. Heidegger proposes a very different understanding of “systematic” theology:

It is systematic not by constructing a system, but on the contrary by avoiding a system, in the sense that it seeks solely to bring clearly to light the intrinsic systema of the Christian occurrence a such, that is, to place the believer who understands conceptually into the history of revelation. The more historical theology is and the more immediately it brings to word and concept the historicity of faith, the more is it “systematic” and the less likely is it to become the slave of a system.

If you’re not yet familiar with it, the Journal for Continental Philosophy of Religion is a relatively new journal in the field that is home to many of the sorts of conversations that interest me as a phenomenologist. Related to this week’s newsletter, anyone (even without a subscription) can access an article by Jean-Yves Lacoste on “Heidegger Among the Theologians.” 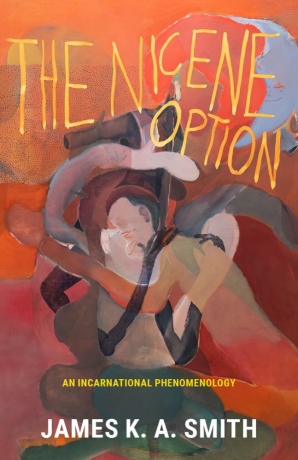 My new book, The Nicene Option: An Incarnational Phenomenology is available for pre-order from Baylor University Press. Use code 17FALL21 at baylorpress.com for 20% off + free US shipping.

You just read issue #17 of God and the Philosophers: A Newsletter from James K.A. Smith. You can also browse the full archives of this newsletter.