Something to chew on … 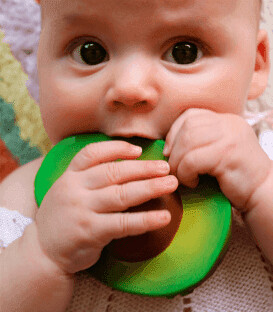 Let’s get this out of the way right at the start. You can now buy a “chewable vegetable-shaped baby toy which stimulates baby’s senses and soothes teething gums while introducing them into a healthy lifestyle from a young age”. So, what’ll it be? Kendall Kale? Arnold Avocado? It’s never too young to start. (Image from Oli & Carol.)

These toys are definitely cute, I’ll give them that. But apparently that isn’t enough of a selling point. Also, maybe it’s just me, but I swear that baby looks extremely anxious. Maybe it would prefer an actual avocado.

So often I write something here and then notice related things elsewhere. Last issue I linked to a re-appraisal of the Green Revolution, which focused on the role of US wheat aid to India. This time, Rachel Laudan’s insouciant pairing of “ethnic” frozen foods prompted the story of how more abundant wheat resulted in the creation of new street foods in India. Vikram Doctor’s links are worth pursuing too. Truly, everything is connected.

Also, à propos an earlier piece on mislabelled seafood, it seems that fish with a Marine Stewardship Council (MSC) label is much less likely to be mislabelled than fish not so adorned, less than 1% versus the global average of 30%. Piscivores of the UK, take note.

Spare the beef, save the climate. Because, as any fule kno, beef cattle are a total atmospheric disaster, what with their belching and bottom burps and moving the meat around and all the rest of it. Just in case you would like some (potentially divisive) facts, the USDA’s Agricultural Research Service has released a report on the resources beef cattle in the US use and their contribution to greenhouse gasses. Bottom line; water and nitrogen are a bigger concern than greenhouse gasses. At least for the USDA …

While we’re about it, more iconoclasm. Italian scientists have come out against a proposal to promote organic farming and food. Jeremy Parzen dissects the open letter they sent to the legislature. The letter “demolishes the ‘beautiful but impossible’ narrative behind organic farming. With supporting data, it reveals the discrepancies in organic farming’s ‘one way’ marketing.” To be honest, I’m not following this one myself. Science has never held much sway in Italian agricultural policy. Sometimes that may be a good thing. Other times, it is a disaster. Either way, I see no upside to getting involved.

You can learn an enormous amount about the world by looking at the changes in chickens. Including, according to one study, exactly when the much-vaunted Anthropocene Age truly began. Personally, I prefer the thesis that it the Columbian Exchange triggered the Anthropocene. At least that has the merit of a truly global signal.

So you fancy opening a restaurant? Don’t.

As ever, comments, criticism and suggestions are truly welcome.

You just read issue #8 of Eat This Newsletter. You can also browse the full archives of this newsletter.