I am disappointed by dynamic typing

They have potential to be more than "no static types", but that hasn't happened.

Here’s weird thing about me: I’m pro-dynamic types. This is weird because I’m also pro-formal methods, in fact teach formal methods as a career, which seems completely antithetical. So on one hand I teach people how to do static analysis, on the other I use languages which make static analysis impossible.

My fondness for dynamic types is ultimately more social than technical:

But there’s also a technical reason: I think dynamic typing is itself really neat and potentially opens up of really powerful tooling. It’s just … I’m not actually seeing that tooling actually exist, which makes me question if it’s possible in the first place.

Dynamic isn’t the opposite of Static

There’s two ways to think of dynamic types. The broader discussion around static vs dynamic is actually about the pros and cons of static typing: how much it helps and how much it gets in the way. That’s why you get arguments like “I don’t need types if I have tests” and “I don’t make type errors anyway”. There’s also stronger arguments about things that are hard to type, like generic least-squares fitting.

I think this approach is ultimately bankrupt. The tooling around type systems gets better every year, and so over time the imbalance of benefits to drawbacks ratio grows more lopsided. If that was the only benefit of dynamic typing, I wouldn’t be so keen to defend it.

But there’s another way of thinking about dynamic types: a dynamically typed language is one where types are runtime values and manipulable like all other values. It’s a short hop from there to thinking of the whole runtime environment in the same way, where everything is a runtime construct.

And that’s really, really interesting to me.

Here’s one experiment I whipped up in Python:

We can replace a function with an object that can be called for the exact same behavior, but also gives us an information sidechannel. And this is an expression! We can leave double as it is in the main program, but augment it with additional information in the REPL or by setting an environment variable.1.

I can imagine all sorts of uses for this kind of trick. Here’s some I’d like to see:

I don’t know if any of these are impossible without runtime metaprogramming, but they all seem like they’d be more difficult. At the very least you couldn’t do them from the REPL. The overall picture is of going one step further than homoiconicity: instead of code as data we have programs as data. In dynamic languages you can write programs that take programs and output other programs. I guess I’d call them “higher-order programs”? I looked a bit and that’s usually conflated with “programs that have higher-order functions”. “Hyperprograms”? Taking bets for the name now

I don’t think there’s very much work done in this kind of dynamic analysis. If there was then I’d see a lot more dynamic typing advocates talking about it or showcasing how libraries take advantage of it. I don’t think that’s happening, though? Because the dynlang features that make this possible are usually pitched in other ways:

I guess the closest to the hyperprogramming model is Pharo? The dynamic code inspector is a big deal, plus there’s this fun talk.

This seems like the lowest tier of hyperprogramming though. Maybe I’m being too critical of it, though, and it’s important step towards showcasing the value of dynamic languages.

Apropos of nothing, here’s SonarGraph inspecting some Java code: 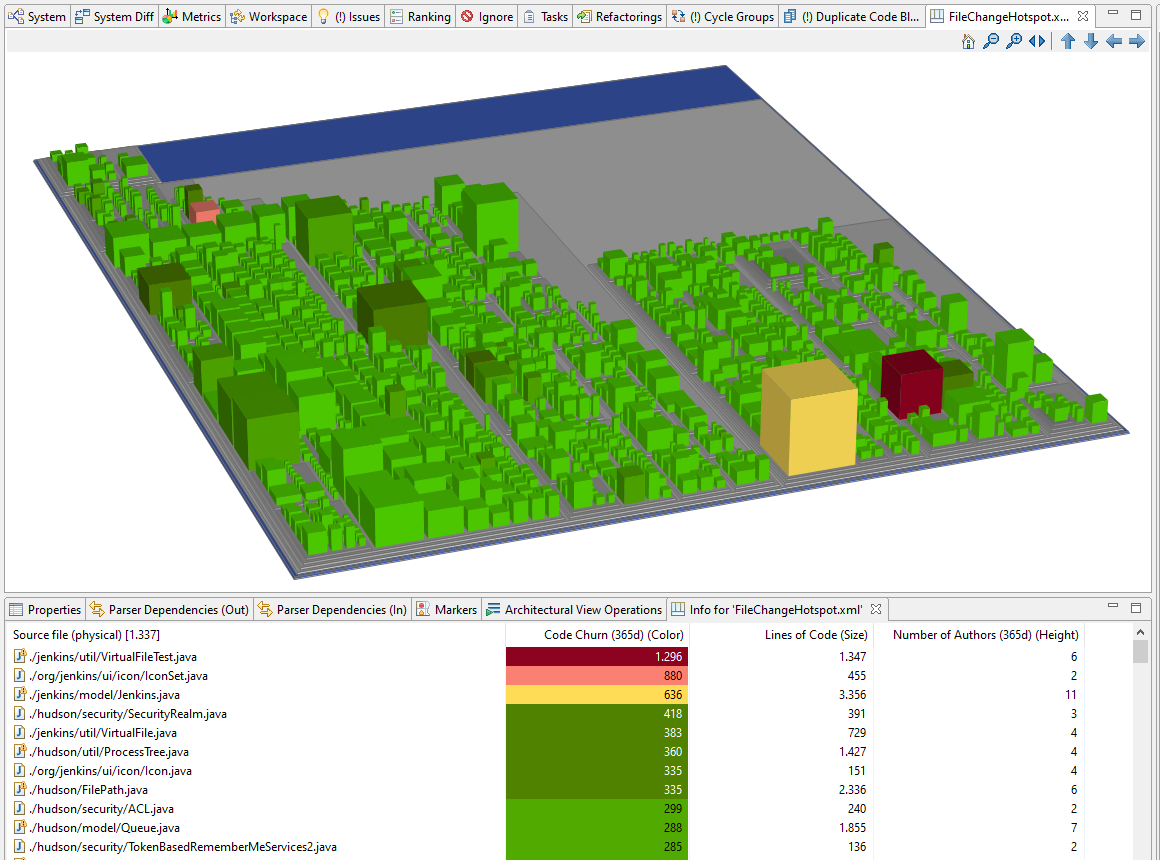 So, like, does dynamic typing actually get you anything? The final straw for me was this paper on inferring tests from code:

The current state-of-the-art for test amplification heavily relies on program analysis techniques which benefit a lot from explicit type declarations present in statically typed languages. Not surprisingly, previous research has been confined to statically typed programming languages including Java, C, C++, C#, Eiffel (Danglot et al. 2019a). In dynamically typed languages, performing static analysis is difficult since source code does not embed type annotation when defining variable. As a consequence test amplification has yet to find its way to dynamically-typed programming languages including Smalltalk, Python, Ruby, Javascript, etc.

I’d expect test amplification to be easier for dynamic languages! You already can do all sorts of dynamic analysis! But toolmakers find it easier to amplify code with type annotations. That’s a little soul-crushing.

Why it doesn’t happen

I suspect the problem is that hyperprogramming is really, really hard to generalize.

My Replacer class, it turns out, has a pretty significant bug right here:

I could probably write a version that didn’t have this problem, but it still points at how fragile this kind of dynamic work can be. It would take a lot of work to make this into a general-use library and I’m not up for doing it. It’s easier to use for my own purposes, where the scope of use it smaller and I don’t have to worry about other people’s edge cases. But then I need to be really good at the skill of dynamic analysis to get anything out of it.

Anyway that’s where I’m left. Just disappointed with how little’s actually done with dynamic typing, and questioning if the cool stuff I want is even viable.

(I’m prolly gonna get a bunch of responses like “you didn’t mention Racket/Raku/Forth/BASIC/Erlang!” You’re welcome to make the case for them, but please don’t rehash the usual “static types are limiting” argument, I’ve been talking about being disappointed in the lack of runtime program manipulation, however you want to call it.

Also you should make it a public blog post instead of a private email. Contribute to the dialog!)

This was sent as part of an email newsletter; you can subscribe here. Common topics are software history, formal methods, the theory of software engineering, and silly research dives. Updates are usually 1x a week. I also have a website where I put my polished writing (the newsletter is more for off-the-cuff stuff).

You just read issue #207 of Computer Things. You can also browse the full archives of this newsletter.