Hardware Things: What's in the DNA of universal reliable electricity access in Africa?

I love the opportunity to invite guests to write the newsletter, it takes on a different life of its own. Hope you enjoy this - Chuma.

Daily, I manage a fleet of wind and solar assets owned by Canada’s largest integrated energy company. When I’m not reading about the going-ons in the African energy space, I’m looking for new ways to express my creative giftings, like writing a newsletter.

Something that’s been on my mind

In the last week of August I virtually attended my first IEEE PES Power Africa Conference and thoroughly enjoyed it. One of the plenary sessions that stood out to me was that of Professor Izael Da Silva of Strathmore University. In his presentation, he shared the four key pieces needed to make universal access to electricity a reality by 2030: private sector participation and investment, government regulations and policy that promote transparency, capacity-building initiatives and digitalisation.

Since I listened to him, I’ve been thinking a lot about all the changes in the electric power sector in Nigeria. For this newsletter, I thought it’ll be a fun exercise to examine the existing Nigerian electric power sector to see if elements of these key pieces exist. Combining digitalisation and capacity-building initiatives under the key innovation, I have titled my findings as The Triple Helix of Universal Electricity Access. 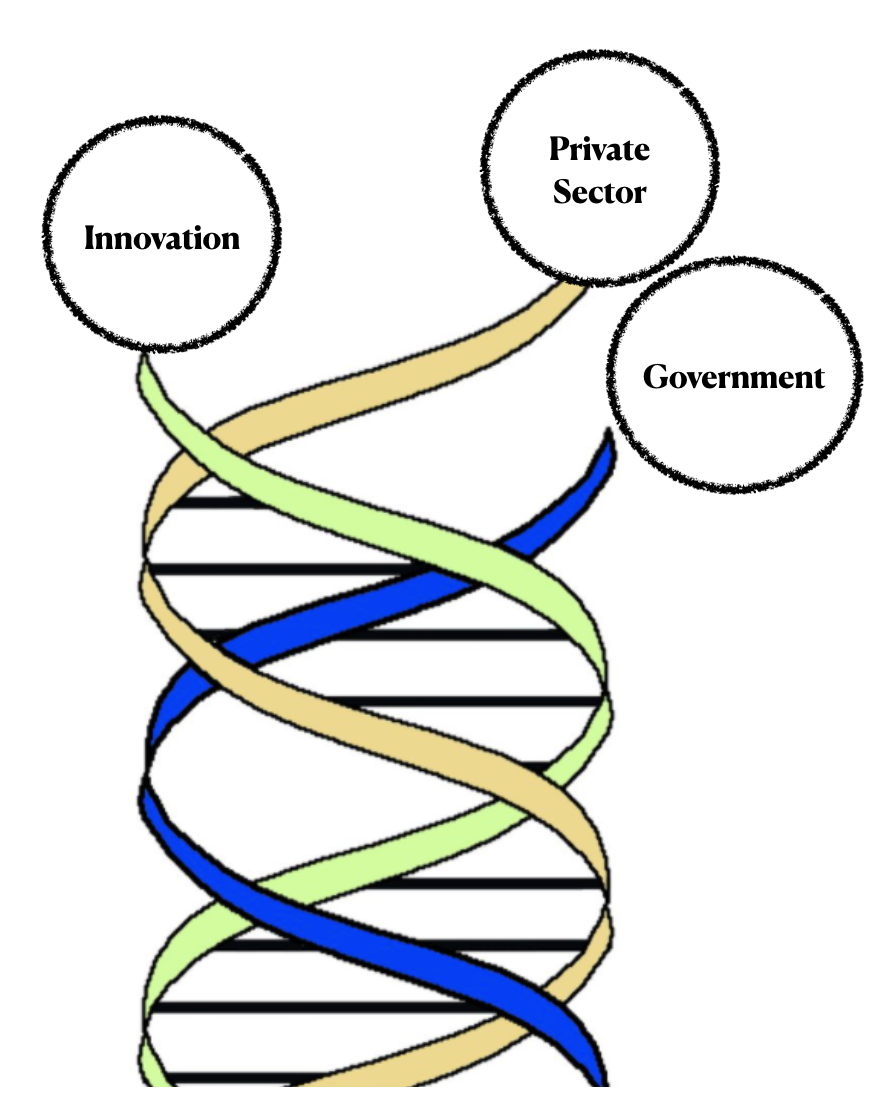 Base structure courtesy of J Clin Invest. 2003; annotation by me.

In simple terms, for universal reliable electricity access to exist, these three factors ought to interact like so: the private sector brings the financing to a free-market system that allows businesses to compete in providing consumers with goods and services; the government makes proper regulations and policies to ensure there is transparency in the industry; and both enable innovation in the areas of capacity building and digitalisation (think knowledge and skills development, implementation of AI, battery storage and smart grids etc.) to ensure the electric power industry in Africa is sustainable.

Laying the groundwork for change started 15 years ago in Nigeria. As a result of national government reform, the National Electric Power Authority (NEPA) was unbundled and the Electric Power Sector Reform (EPSR) Act was signed into law in March 2005, enabling private companies to participate in electricity generation and distribution. Transmission is still solely operated by the Federal Government. The Act also named the Nigerian Electricity Regulatory Commission (NERC) as an independent regulator for the sector. It took 8 years after the law was signed for private companies to actually enter the industry but it finally happened in 2013, when private companies like Ikeja Electric and Eko Electric (Lagos State’s two private distribution companies) entered the picture.

Sidenote: In North America, the regulator is also called NERC - North American Electric Reliability Corporation. Whenever I’m at work and I see something NERC-related, I think about NERC-Nigeria and it amuses me a little.

Two years ago, the Lagos State House of Assembly passed the Lagos State Electric Power Sector Reform Law. This legislation is aimed at boosting the supply of electricity in Lagos through the establishment of an embedded power scheme and the creation of offenses for energy theft. What I particularly like about this law is how inclusive it is. It also makes provision for off-grid electrictrification of rural parts of Lagos not covered by the national grid within the State. What I think this law will do is signal to investors that Lagos is serious about solving this problem and should they choose to invest, they will have the backing of the State government.

To an outsider, these policies seem like a step in the right direction but the citizens have not seen noticeable improvement. They were not at all impressed with the privatization. The electricity up-time is better for customers in some franchise areas but they expected much more.

So why the disconnect? Well, the answer is multifaceted but according to the experts, one factor is aging infrastructure, another is the lack of innovation. Since the private distribution companies took over, they’ve complained about revenue losses largely due to the inefficiencies that come with aging infrastructure, and a poor metering structure which supports theft. The original electric rate system also did not allow for cost-reflective tariffs. Basically, the private distribution companies are not making money and there’s no incentive to pump more money into a broken system. According to NERC, about 60% of power consumers in Nigeria have obsolete meters or are unmetered—my grandmother in Ibadan is included in the latter group.

For these unmetered customers, the distribution companies resort to estimated bills which can be problematic for both the consumer and distributor. Since January 2020, NERC has issued orders to tackle some of these problems; the most recent is the increase in electricity tariff. Starting September 1, 2020, NERC has approved an increase in electricity tariffs for the eleven distribution companies. The exact increase varies with jurisdiction but in some cases, it’s up to 100%. In theory, this new tariff scheme means well. It is cost-reflective and is supposed to help the distribution companies recover some lost revenue. However when you look at the big picture, the timing could not be worse; there’s a pandemic, the inflation rate is at a 27-month high, several people have lost their means of livelihood and the USD-Naira exchange rate is terrible.

This brings me to the last strand of the triple helix, innovation. This is one area that I have not seen giant strides in. Nigeria has an installed generation capacity of around 12.5GW but according to Power Africa, we’re only able to generate around 32% of that largely due to technical limitations. In order to make this tariff increase meaningful, I’d also like to see concrete plans for how the distribution and generation companies plan to upgrade their infrastructure. And there’s also smart metering. With the success of the telecommunications industry in Nigeria (which has today enabled mobile money which works really well), I think there’s plenty of opportunity for smart meters to be connected via existing mobile networks. I would love to see the day when smart meters are a reality in Nigeria and looks like it might not be too far off. Lagos State is hosting a Smart Meter Hackathon Challenge and I’m keeping my eyes peeled for the outcome of the challenge.

Something I enjoyed reading

West Africa’s first large-scale wind farm is now live in Senegal. According to NSEnergy, the Taiba N’Diaye wind farm is expected to generate 400GWh of clean electricity a year. This is equivalent to a capacity factor of approximately 30%. The capacity factor represents the ratio of the actual power output to the theoretical maximum. A 30% capacity factor seems low to an outsider but it’s actually pretty standard. Higher capacity factors often mean more expensive equipment but that does not equal more revenue so wind farm developers have to think about how to optimize the capacity factor during design. My one concern though, when I read the news was around operations and maintenance (O&M). The good news is that I discovered the wind farm’s management retained Vestas to do the O&M. It must have cost a fortune but it is the sensible thing to do. As we look to build more wind farms in West Africa, I’d like to see us build capacity in the area of operations and maintenance. Perhaps Vestas can open up shop in WA and train local talent.

Agrivoltaics could change the nature of sustainable farming in Sub-Saharan Africa. One of the major criticisms of solar farms is how much useful farming land it takes up. Agrivoltaics attempts to solve that problem. In layman terms, Agrivoltaics is a mashup between agriculture and solar farms. Imagine a fully functional agricultural farm with raised solar panels shading the farmed area. Sub-saharan Africa is the solar belt of the world, with no other area in the world receiving nearly as many hours of bright sunshine per year. That said, the penetration of solar power is very low. As the need for and cost of renewables continue to drop, I expect to see many more solar farms built in Africa and I’ll be interested to see which African nation adopts this strategy first.

Remot brings digitalisation to the offgrid market. Remot is a hardware and software system that monitors and manages the performance, usage and health of solar photovoltaic (PV) panel installations. Developed by Ugandan startup, Innovex, Remot also offers diagnostic capabilities as it is able to examine the PV installation including the batteries for inefficiencies and potential problems.

Have a good month!

You just read issue #28 of Hardware Things. You can also browse the full archives of this newsletter.