The First Mile, Last Mile problem describes a major issue in transportation systems: the difficulty in getting from home to a station and from the last station to your destination.

While this problem originates from industries like telecommunications and supply chain, it presents itself in other industries, like commercial IOT (last mile) and food processing (first mile). Today’s newsletter is my attempt to cover interesting things in these spaces.

Have a good September.

We pay value for solutions that solve our problems, but MellowCabs in South Africa thinks slightly differently. Their three-wheeler taxis are powered by hydrogen fuel cells, use regenerative braking and are completely free to ride in urban areas where they operate. They are paid for by ads that cover the body of the vehicles - which is a good fit as they would operate outside of city centres where there could be less advertising.

Location Matters. Deciding where to manufacture your product or how to split the manufacturing ultimately depends on who your customers are. But on the continent, where shipping from Kenya to Malawi costs the shame as shipping from China the choices are more difficult. In this (dated) article, ASME Demand compares centralized and decentralized manufacturing options used by hardware companies in Eastern Africa.

What good is data if it tells you nothing? Last mile IOT refers to the use of the data that the sensors in our devices are already producing, but for the benefit of the we who own the device. While that brings up a number of constraints, such as privacy, the real setbacks are: the speed such data can be analyzed and the accuracy of the analysis. Ahmed Banafa has an insightful article on this.

‘As (electric) cars become safer, more comfortable, and increasing friendly to the environment, each vehicle requires thousands of ceramic capacitors for advanced electronic features’, the demand for electronic components is rising a little faster than the supply can match it leading to increasing lead times. Bradley Ramsey considers changes to the material science of certain components as a viable way forward.

‘Give everyone a robot’: Danielle Applestone, former CEO of Bantam Tools, has an interesting take on robots in manufacturing on the DFX podcast.

The code is saved on a Raspberry Pi: details from the team that developed the technology to save Stephen Hawking’s voice.

‘We hope to introduce this commercially in 2020’: Daikin and NEC are working to develop central air conditioning that identifies employees by facial recognition and reduces the temperature when they fall asleep.

Plasma-etching using your microwave: scientists have developed a way to hack a microwave to generate plasma that can improve the properties of materials, à la Heat Treatment.

A couple of weeks ago, I shared a beer with a friend of mine who previously worked for an ethanol production plant in Ghana’s Volta Region. While we were still lucid, we talked about cassava processing and I was of the opinion that transporting harvests from stakeholder farms - first mile - would hamper their production time severely.

It turns out that to produce ethanol you can’t rely on farmers. The typical starch level in grown cassava in that region is 5%, but to produce at a sustainable level you need about 25% and a daily harvest of 60 tonnes in order to produce 10,000 litres everyday.

The only way the increasing demand for ethanol (from China and Brazil) is met are by experimenting with improved cassava varieties - some which have a starch content of 35% - and growing their own cassava in the same location as the plant.

A Thing to Apply For

Maker Faire Rome is calling for innovative technological solutions for accessing energy that could build a circular economy and increase energy efficiency in Africa. Winners get a round trip to the conference as well as a booth; applications close on the 10th.

Dext Technologies produces practical science sets for kids to perform basic experiments in the Upper Primary and Junior High School science syllabuses. The Ghanian startup was one of the winners in last year’s edition of the ASME Innovation Showcase in Kenya.

A throwback to what aviation looked like in the early days. 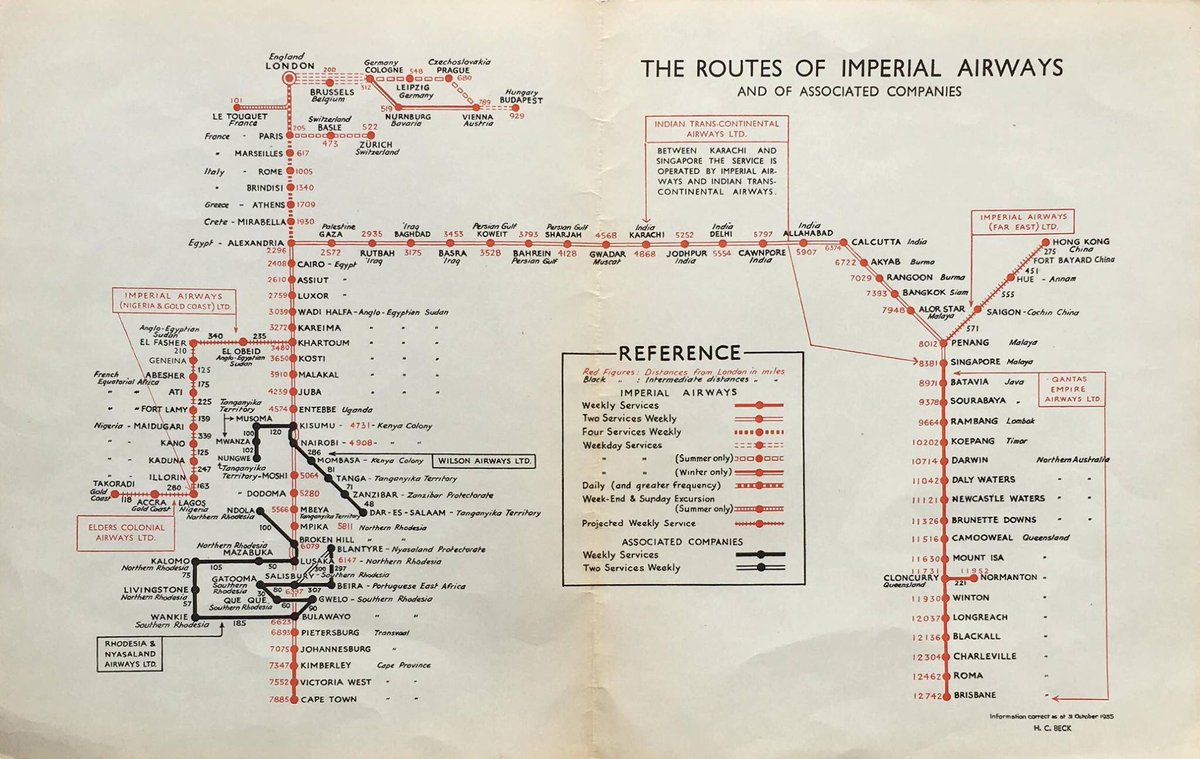 It’s 1935 and this is Harry Beck’s diagram of the route network of Imperial Airways the forerunner to BA. The famous #KangarooRoute to the right all the way to #Australia. It would’ve taken 13 days to complete this journey, that’s now done in 17 hours by @Qantas. #Avgeek #BA100

Conducting an interview for a mechanical designer is difficult for many people, but in this interview Andrea Ashwood presents what the Spectacles team does: ask for the design critique of a torn down wearable.

Next month, Moushira Elamrawy will be guest writing the newsletter. She’s a design technologist who developed the Risha Laser and currently advises the Egyptian government on policy for product development. I can’t wait to read it.

*new section; highlights an interesting conversation I had recently, will appear intermittently

You just read issue #7 of Hardware Things. You can also browse the full archives of this newsletter.