The Hammersla Exposition No. 7: Value Pack

So, it’s been a minute. The last time I dropped a message in a bottle was Christmas Eve, 2020, which makes this the first missive of 2021. Happy new year! It feels like we’ve come a long way in the last three months – which really feels more like seven months, two weeks and four days.^

^That bit reminds me of this classic scene from The Jerk, which I love so much I insisted on using it as a reading at my wedding, which then was at least partially responsible for causing some of my more conservative in-laws to walk out of the ceremony. I once met Steve Martin (thanks, Jeremy!) and I probably should have seized that opportunity to tell him that story, but instead I just awkwardly shook his hand and stood there silently like a schmuck.

It seems like we’re entering into a new phase of guarded optimism now – except, I suppose, for the most apocalyptic partisans and conspiracy-minded among us – and it feels a little weird. Don’t worry, I have enough free-floating anxiety to get me through this encouraging time.

There’s been a lot of discourse lately, especially in the political sphere, about “cancel culture,” what it is and what it means. Liberals have made the compelling case – in the face of what I believe to be a bad-faith argument – that “cancel culture” is just another term for “accountability,” and in most cases where people are bent out of shape about being canceled it’s because they think their infractions don’t merit punishment.

I prefer to think of “cancel culture” as the free market at work: if enough people are offended, it’s their prerogative to boycott your work (or not vote for you).

It gets a little fuzzier when you’re talking about companies and institutions blackballing you. While there may be a moral factor in these decisions, in most cases it’s because those institutions are anticipating an unfavorable market response, as with Disney and Gina Carano, or the NFL and Colin Kaepernick.

Now, I happen to believe that Disney was right and the NFL was wrong, even though they were observing essentially the same principle, but that’s me making an unabashed value judgment, and recognizing the the line is a fine one.

Anyway, that is not really the thing bothers me about the “cancel” craze. What I’m having a hard time with is how the whole thing has been flattened into a reductive and binary “canceled or not” assessment. There is nuance, at least at all but the most advanced levels of this stuff. And I’ve started to think about it like this:

There are two axes. On one (x) axis is the severity of the infraction; it’s naturally subjective and based on the credibility of the given accuser, but generally speaking, crimes of bad taste and inflammatory rhetoric are below the mean, while actively hurtful actions are above. On the other (y) axis is repentance; that is, whether one acknowledges and seeks forgiveness for their actions or whether they double down and lean in to them, usually by accusing the accusers. 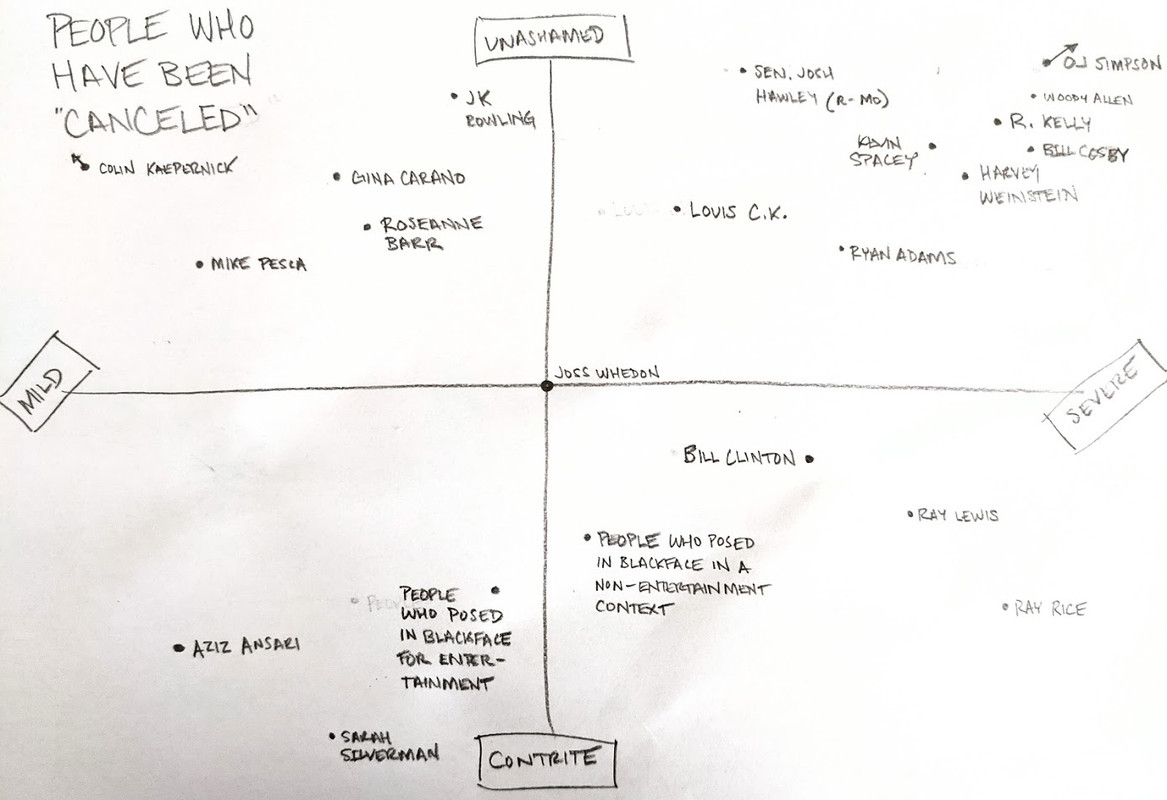 The folks in the lower-left quadrant (which I’ll call “Oopsies”) are the easiest to forgive, mainly because they tend to be casualties of rapidly evolving standards about what is culturally “appropriate.” I don’t think those people should be tarred with the same brush, and I think Americans are generally forgiving enough to agree with me.

The ones in the upper-left quadrant (“The Martyrs”) will probably never really regain our good graces en masse without real penitence. But they will always maintain a “floor” of support from the die-hards in their particular ideological camp.

It can be hard to tell if those in the lower-right quadrant (“The Weasels”) are sincerely ashamed or whether they’re just playing the game – it’s telling, I think, that many of those people seem to be politicians and pro athletes. The likelihood of them being accepted really depends on what it is that they did, exactly, and their remaining value to their community.

“The Devils” in the upper-right quadrant are, of course, the most worthy of cancellation. There are some real scumbags here. And what makes it worse is that most of these people were really powerful, which enabled them to silence accusers and manipulate the narrative, thereby perpetuating their villainy. And, to some extent, many of them are essentially uncancelable because their power earns them a voice in the public square.

Where I find myself most vexed is at the very center of the grid, where one of my erstwhile pop culture heroes now resides. I am a fan of pretty much everything Joss Whedon’s ever done, with the notable exception of Justice League, on which, of course, his conduct played a large role in landing him on this list. I thought of his work, and he, himself, as smart, funny and soulful. His characters were sentimental without being schmaltzy, noble and flawed, tough but sensitive. He helped make nerds cool. He was kind of a Dork God.

But now, yeesh. The accusations are pretty brutal, and make it hard to enjoy some of his work even in retrospect. But because most of the allegations are nonspecific and vague, and corroborated but not substantiated, it’s hard to tell where he belongs on the severity axis. And because he’s said practically nothing about the allegations publicly, we have no idea if he feels bad about it or not.

And for my part, I don’t know what to do. Do I disown his work, even though it is deeply enjoyable and meaningful to me? If I do that, am I repenting for his sins? If I don’t, am I condoning them? I kind of hate him, not just for what he’s accused of saying and doing, but also for putting me in this position. But I also kind of want to go back and watch the Angel series finale again.

I just bought a new pair of shoes. 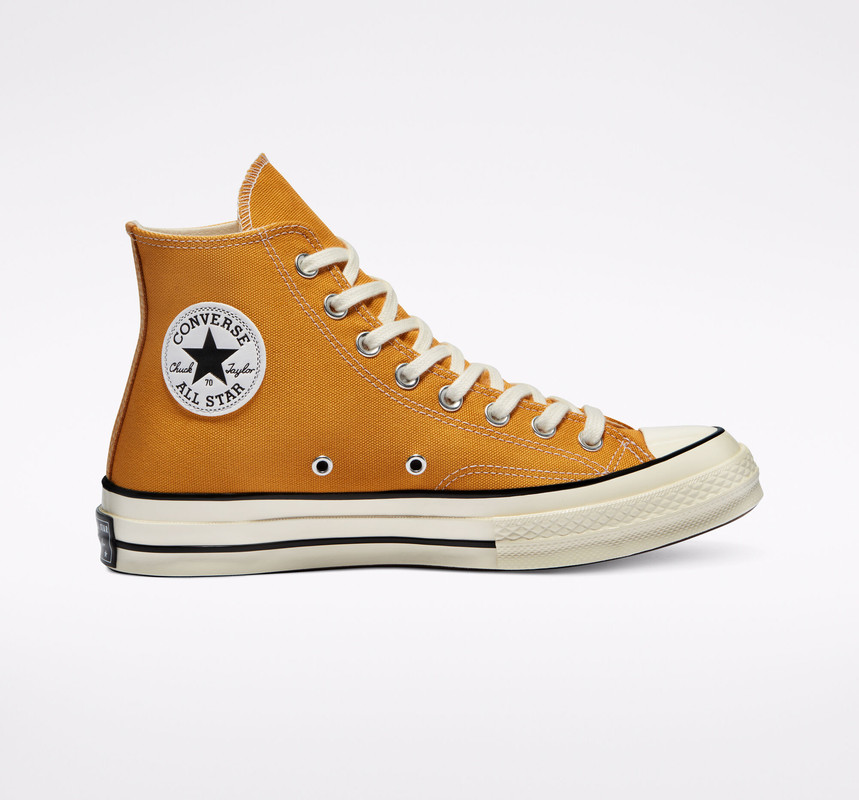 I think I have a rather particular view of fashion. I generally think that fashion is a bunch of baloney, that it’s commerce doing a bad impersonation of art, and too many people confuse it with “style.” I tend to look down on people who use clothing labels as a totem of status or personality – as a wearer or as an observer.

As regards my own wardrobe, this point of view usually manifests as tee shirts without any writing or logos on it, unless it is a small/independent business that I strongly endorse. I buy Levi’s jeans not because I have any loyalty to the brand but because they are relatively cheap, fairly durable and generally indistinguishable. I buy my underwear at Target. Mostly I just want to be comfortable.

But I do have one weakness, and it really makes zero sense in the context of all this other anti-elitism-elitism. I’m a total sucker for Converse sneakers. They’re not particularly comfortable (although the Chuck 70 line is a historic improvement), and the good ones aren’t really cheap anymore, either. But there is a part of me that strenuously wants to inhabit their brand identity: simple, classic, versatile, traditional, and fun in a boring sort of way (or boring in a fun sort of way). I could spend hours playing on the “custom” section of Converse website, and if I were wealthy I would probably have a special closet just for my Chucks.

I don’t know what this means for my street cred, but the bright side is that I never really had any to lose.

The Latest Episode of
The Hammersla Inquisition

The slow drip of my beloved podcast project has now amounted to a delightful episode with Christin Schaaf, who in many ways embodies everything that was great about my high school experience.

More on that in a second.

I noticed as I was editing the episode that I stumbled into no fewer than three factual errors within the first half-hour of questions, which constitutes a humiliating level of malpractice. It is particuarly embarassing given that I sprung a couple of pop quizzes on her, which she answered with precision and aplomb.

Christin, bless her heart, pretended all this wasn’t a big deal. But I find it mortifying.

Christin wore a lot of hats in high school but was probably most identified (and self-identified) as the editor of the yearbook, where she was in charge of soliciting and publishing the class superlatives.

Once upon a time I wrote about our class superlatives – and my relative standing within them – and I must here confess that from the time I first learned about what these things meant (or what I thought it meant), I always kind of wanted to be voted “Class Clown.” From my perspective, it was the best a middling adolescent like me could hope for.

But alas, my particular brand of humor was not popular with the masses. It was not even particularly popular within my peer group.

Since I did not “win” a class superlative, I cling to the two notices of acclaim I received at our Senior Awards Night: one was the excellence in A.P. English award, which is deeply meaningful to me because my mother was an English teacher and because I really respected Ms Hamm, who taught the class. The other was the “Spirit of Webster” award, the meaning of and criteria for which I never really understood. It was explained to me as recognizing a person who represents the self-reverent qualities of the school or the town or whatever. In practical terms, my best guess even now is that it went to people who “checked all the boxes” in terms of academics, citizenship, etc. But if I’m being honest, there is no one to me who epitomizes those ideals better than Christin Schaaf.

We could debate the artistic value of superhero movies for a long while, but I feel like people always end up talking past each other.

There are valid arguments: these projects are rather limited in narrative depth and possibility, and it seems plain that these IP tentpoles are pushing out the midrange comedies and sub-Oscar dramas that were a vital part of my movie-watching youth. On the other hand, I can count on one hand the times I felt a shock of euphoric, communal emotion while sitting in a movie theater with dozens of other people, and they have almost all come in the context of the Marvel Cinematic Universe (MCU). Fan service is cheap, but by Jove those people know what they’re doing.

I’ve seen all the MCU movies, most more than once, and I have opinions about all of them. This is my list in order of worst to best – as always subject to change – with my brief “haiku reviews.”

I’m not sure who the next podcast guest will be, but given the incubation period on these things I’m going to have to make sure we don’t discuss anything too timely. Stay with me!

You just read issue #8 of The Hammersla Exposition. You can also browse the full archives of this newsletter.