We recently celebrated Independence Day, the nominal birthday of our nation (as well as my brother Darren and my father in law, “Sir”).

Sometimes I wonder if I would have been an American patriot or a loyalist, were I alive in revolutionary times. I am, after all, a political moderate and instinctually deferential to authority. And while I’d like to assume I would have been sympathetic to the intellectual reason of our founding fathers, I also recognize that it was a rebellion waged mostly by wealthy and morally flawed white landowners who didn’t like paying taxes. I know very little about King George III, so I can’t say if he was a tyrant or just kind of a nitwit, but I have been watching The Crown on Netflix and remain convinced that hereditary monarchies are like some kind of egregious typo from the middle ages that somehow keeps getting carried forward in new editions, so throwing off the crown was almost certainly a good idea. But then again, Canada.

It’s kind of hard to hate July 4 (although it should be said, Rochester’s own Frederick Douglass was not a fan), especially if you think of the Declaration of Independence as – in the words of Martin Luther King, Jr. – a “promissory note” of freedom and justification of protest.

I do like holidays, in principle – in my opinion, we should have a lot more of them – and it’s tempting to think of any state-sanctioned excuse to eat grilled meat as a well-justified end. With regard to firecrackers I’ve vacillated between sentimental and curmudgeonly over the years. Now that I have a six-year old child, I’m softening up again, although the idea of crowds still makes me queasy, which means it will probably be at least another year before I can really enjoy the spectacle through her eyes.

It’s dangerous to read too much into nomenclature, but I do find it a little ironic that this Independence Day, we seem a little too far apart. Perhaps we ought to be thinking a little bit more about how much we actually depend on each other. After the past 18 months, I’ve come to realize (1) how much I miss other people and (2) how incredibly selfish people can be when it comes to the common good. As we think about America and what makes it great, maybe we shouldn’t so much fetishize individual liberty at the expense of responsibility to each other and the community.

It seems like there’s a new story every week about marijuana. You may have heard that the United States Anti-Doping Agency recently made the by-the-book but plainly silly decision to suspend American sprinter Sha’Carri Richardson for using it as a “performance-enhancing drug.” On July 1, recreational weed became legal in my commonwealth of Virginia (and Connecticut, too), while Justice Clarence Thomas said federal laws against marijuana may no longer be necessary. Meanwhile, Snoop Dogg continues his improbable metamorphosis into Bob Hope.

I have never tried or used pot and I confess to being ambivalent, if not outright conflicted, about marijuana legalization. As a nation and a society, we seem to be past the inflection point of accepting marijuana as something that is relatively harmless and ought to be legal, and yet I find myself socio-politically “homeless” on the issue.

These are the things that I think about marijuana, in no particular order. None of these observations are necessarily true, they’re just what I believe:

As anyone who knows me knows well, I didn’t drink alcohol in college. People would ask why, and I would tell them (in so many highfalutin words) that I didn’t want my experience of life to be mediated, dulled or altered in any way, so I could savor and remember the profound truths of each moment. The actual truth is that I wasn’t 21 and I didn’t want to do anything illegal, even if everyone else was doing it, too. But I had to explain myself so much, and so often, that I actually started to buy into my stated philosophy, and by the time I turned 21 I wasn’t really interested in alcohol. By the time drinking became a valid (and practically compulsory) adult activity, I hadn’t developed the taste for it and would rather just have a root beer anyway.

Sometimes I think back and wonder if I missed out on some things by not letting my guard down once in a while. Perhaps I should have had a drink and let my natural inhibitions have the night off. Maybe I would have had more fun. More importantly, maybe that would have been a more genuine life experience.

In that bulleted list above, the sum of my anxieties always comes down to that last item. Marijuana is never going to be a ballot-box issue for me, and even if it were, the tide has already turned. Policymakers see the writing on the wall, and popular culture (which seems to be fueled by marijuana and integrated product placement) has never been more bold about it: marijuana is here to stay. The question for me is, what am I going to say to my daughter? It would be so easy for me to foist that authority on to the criminal justice system, but that’s not an option anymore.

Eventually she’s going to reach the age where she starts to make choices without my permission or input, and I’ll just have to hope and trust that I’ve equipped her to make good decisions. I don’t think smoking a joint is a good decision, mainly because I wouldn’t want it to make her dull or lazy. But then again, what do I know? I love fried chicken.

One of the hobbies I took up during the pandemic was learning how to play the ukulele – or, I should say, learning how to play it better. I think it’s well established that the ukulele is one of the easier instruments for anyone to play. With a modicum of training an above-average chimpanzee could probably do a passable job with it, which is the level to which I currently aspire.

I was gifted my ukulele a dozen years ago or so, when I had the explicit goal of writing my bride a song for our wedding. I did that, and then kind of lost the uke behind a sofa for the next decade.

Homebound and seeking an outlet for restless tension, I picked it up again in 2020 and started re-learning the chords. I found a treasure trove of free tabulatures at UltimateGuitar.com and soon I was practicing songs between work videoconferences.

I feel like the ukulele is building toward a moment, now. People are ready to feel lighthearted and joyful again, and the ukulele (when played properly) is like a cool ocean breeze, tickling your ears.

Current “it” girl Olivia Rodrigo is apparently a big proponent of the instrument, perhaps presaging a surge in pre-teen ukulele adoption. But when I think about ukulele inspiration, I turn to George Harrison. This heartwarming recollection by Tom Petty never fails to bring a smile to my face, and this little ditty recorded shortly before his death is apparently the piece that cheers his widow Olivia when she misses him. Harrison is so closely associated with the instrument that his son (and artist/producer) Dhani even has his own signature ukulele line – at $280 a luxury item to be sure, but one that I think I’d kind of like to have before I die.

Of course, to even somewhat justify such an expense, I’m going to have to get a lot better.

The Latest Episode of
The Hammersla Inquisition

The subject of my latest podcast episode is S. Philip “Phunwin” Unwin, my fellow Rochesterian, UR Yellowjacket and Delta Upsilonian.

Phil has the distinction of being my most overtly Republican friend and quite possibly my only Republican friend, if you don’t count coworkers and family members. As I imply in passing during our discussion, this is indicative of two things, neither of them good:

(1) Political identity has become so rigid and heavily stereotyped that having a friend outside one’s own party affiliation is almost like having a friend from another planet.

(2) I am so pathetically sheltered and insular that having a Republican friend is practically the best I can do in terms of diversity within my inner circle.

Fortunately, Phil is a good sport. Which is a relief, because he would be a formidable enemy.

You can listen to the podcast here.

We do end up talking some politics during our discussion, including our performance on a couple of online quizzes that purport to pigeonhole one’s ideological identity.

The simpler of the two is the Political Compass. This is what my score looked like: 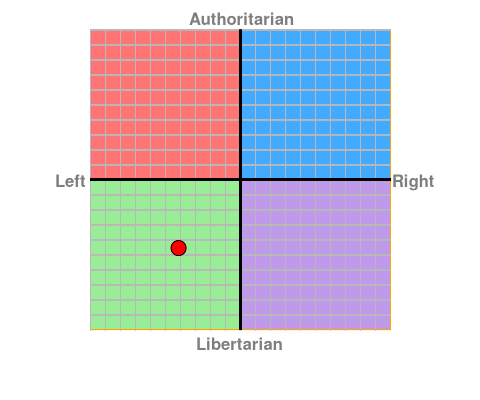 
And this is the video of the social studies teacher (“Mr. Beat”) who attempted to map each American president (excluding Biden) by taking the test 46 times.

In my last email I dipped my toe into the chilly waters of film criticism. This time, I’m doing a big ol’ cannonball into the deep end.

Using a simple (if idiosyncratic) mathmatical formula, I have created a spreadsheet to determine, semi-scientifically, my favorite movies of all time.

As a philosophical matter, I wonder if there is a difference between “my favorite movies of all time” and “the best movies of all time, in my opinion.” I suspect the weighting of my categories might be a bit different – in such a way as to emphasize the objective rather than the subjective. And I probably ought to see more “classic” movies before weighing in on that grander question. But, ultimately, it all comes down to opinion, and the fact that mine is right and yours is wrong.

“Have a great summer” was always the clumsy go-to phrase you would write in someone’s high school yearbook if you knew you didn’t want to talk them before coming back in the fall. I hope to jam in another newsletter and podcast before the autumn breezes roll in, so I won’t say “have a great summer.” I’ll just say “I’m not going to pay a lot for this muffler!” and you’ll know what I mean.

You just read issue #11 of The Hammersla Exposition. You can also browse the full archives of this newsletter.