The first song on Big Thief's colossal new double album is called "Change." It's a quiet song. It eases you into its 20-song track-list without overwhelming you. For a record as long as Dragon New Warm Mountain I Believe in You, it understands what it's asking of the listener. Rather than throwing you in the deep end, it teaches you to swim in the shallow end first. Change is hard, especially big change. You become so accustomed to what you currently have that it can be jarring when it is suddenly taken away from you. Adrianne Lenker knows this, and she knows that change is natural and unavoidable. 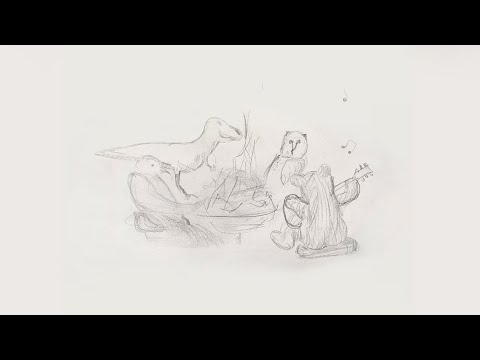 When I found out that my grandfather, who we all called Papa, passed away on Sunday, I felt that shock. I stared at the bedroom wall as my mom broke the news to me, processing everything and nothing. Like Lenker, I know that change is inevitable. I know that change is something we all experience, big and small. Nothing really prepares you for it, even though you know it will happen at some point.

I've spent a lot of time with Big Thief's new album since its release last Friday. It's an album I had been looking forward to because it feels like Lenker, Buck Meek, James Krivchenia, and Max Oleartchik are at the zenith of their powers. Dragon is Big Thief crystallized in its purest form. Double albums like this one encapsulate an artist's full complexity. Some people will connect with songs like "Little Things" and "Simulation Swarm," but others may connect with "Red Moon" and "Spud Infinity" instead. There are different parts of albums that we hold dear to ourselves, and double albums amplify that experience. There are simply more memories to collect on the way. The longer you spend with someone or something, the closer you generally become with them.

I've never really dealt with losing a close family member until now. Papa and I were close. He was 89. We all got so used to him being around that we almost mistook him as invincible. One week he was completely fine. The next week he wasn't. My wife told me that it's a blessing and a curse to not lose someone you deeply love until you're 25. I loved having Papa in my life, but the more time he spent in this world, the more jolting his exit from it would become. I'm not experienced with death or grief. It's something I've been aware of but have scarcely dealt with on a personal level. Everyone has to at some point. Death is a necessity of life, but that doesn't make it simpler.

Would you live forever, never die?

While everything around passes?

Would you smile forever, never cry?

While everything you know passes?

Part of me is glad Papa isn't in pain anymore. Part of me is also glad that he didn't have to be here when his beloved Genevieve moves on from this world, whenever that day will come. I loved seeing how Papa looked at his Genny. When she had her accident in 2017, he went to visit her every single day. He would stay as long as he possibly could. Papa and Nana helped teach me what love is. I saw the way they loved each other. I love Rachel that way, and I think that's why this is so painful. Papa passed on February 13. The next day was Valentine's Day, which is also Nana's birthday. It felt like the worst timing. Having to tell Nana that Papa was gone, in a way that she would understand, was hard. I hope she understands. But, still, I think she knew how much he loved her, and that's what ultimately mattered. Papa's roses adorned the table in front of her, and underneath them lay a card from Papa. The card read, "With love always, Morris." "Always" is the key word. A day after his death, he still loves her and sends her flowers and a card for her birthday and Valentine's Day. Always. Papa was moved to Nana's nursing home, and he got to see her in his final hours. Although he had suffered severe brain damage and wasn't acting like himself, he held Nana's hand and called her his sweetheart. With love always.

Papa showed me what love is in myriad other ways, too. He got me my first dog. My mom and I had just gotten out of a movie theater, and he called her as we got back in the car. "We're going to Papa's and Nana's. They have a surprise for you," she told me from the front seat. We made the half-hour drive to their home, and I was told to close my eyes. When I opened them, Papa was holding a puppy toy poodle, who stared back at me lovingly and trustingly. I named her Curly for the texture of her fur, and she was my best friend. It was Papa who thought I needed a pet, and I've loved dogs ever since. Now we have two dogs, and it's hard to imagine loving them the way I do without Papa teaching me how to love and care for a dog when I was little.

To a place we've never been before

The deep sea, a suitcase

I love Big Thief. I love how they feel like a bona fide band, a collective of musicians that deeply understand one another, their strengths and weaknesses, their interests, their passions, their fears. Big Thief share a closeness and an unerring sense of community. In the press photos for Dragon, all four members are practically spilling over each other. They reflect their emotional connection through physicality. I used to think these photos were funny, and I'd laugh at them because of how absurd they all look. Now, it feels like low-hanging fruit. Now, I admire the photos because they're not afraid to show their love for one another. It shows how comfortable they are together, and music is the binding agent holding them all in place. Community and family, whether it's blood-related or not, is integral to everything. Papa's favorite song was "Moon River." The day after his death, I listened to Frank Ocean's cover. I wanted to meet Papa where he was at, and I'd like to think that he met me where I was at, too. My interests became his interests. He'd watch me play Kingdom Hearts 2 on my PlayStation 2 and play pop-punk songs on my unplugged guitar simply because he wanted to.

One of the reasons I have such a profound relationship with music is because of Papa. I've always been a drummer, first and foremost, but Papa thought I might want to learn guitar. I was 13, but he was already thinking about how I could take a guitar to college, to wherever I ended up. You can transport a guitar with relative ease. You can carry the music with you. It connects you to a place, even if you've never been there and know nobody in the area. Papa and Nana were going to give me an old Spanish 12-string they had, but they searched for it to no avail. Instead, they stopped by my mom's house with a brand-new electric guitar. They went to Guitar Center and told them I love alternative and punk music, so they got me an Ibanez along with a tablature book of Blink-182 songs. I taught myself "Dammit," "Down," and "All the Small Things," and I began writing original songs months after. Playing guitar led me to become a lyricist. Becoming a lyricist led me to become interested in writing as a whole. I think you know where the thread leads from there.

Would you stare forever at the sun

And never watch the moon rising?

Would you walk forever in the light

To never learn the secret of the quiet night?

The album cover for Dragon New Warm Mountain is a band of animals playing music together, sitting around a campfire. It displays community and innocence and love and togetherness and family. At Nana's and Papa's house, the night would eventually dissolve into the music blasting from the speakers. We'd listen to Nana's favorite reggaetón songs, and she'd bust out the claves and dance around the living room. I'd bring my guitar and we'd all jokingly sing Willie Nelson's "On the Road Again" and Johnny Cash's "Ring of Fire." They'd also want to watch me play songs by Sum 41, and I humored them with my Ibanez, faux-hawk, and Hot Topic band tees. When I look at the album art for Dragon, I'm reminded of those nights. I'm reminded of everything Papa and Nana represent. They're the proverbial glue.

Aside from songwriting, Papa also introduced me to another lifelong love: Nintendo games. I was at a Royals game with my dad when I found out that I had a surprise waiting for me after the game. I had been coveting a Wii for months, but we could never find one at the stores because they were all sold out. Papa saw an ad in the newspaper, so he queued up at the local Best Buy to procure one of these sought-after "W-2s," as he called them (you know, like the tax form?). Once I got my hands on a Wii, I discovered how much I loved Super Mario, The Legend of Zelda, Super Smash Bros., Animal Crossing, and the like. I know they're just video games, but they've brought me so much joy. Papa brought me so much joy. It was the gesture, too, that has always meant a lot to me. Out of the five love languages, Papa was all about acts of service. He'd make a lot of jokes, abide by his go-to curse word and modifier ("damn"), but he'd drop the world for his loved ones and make no big deal out of it. He'd especially spoil his grandchildren, my cousin Lindsey and me, as grandparents are wont to do.

Still, what I find

Is you are always on my mind

My dad recently told me to look for signs of Papa. I've been looking for them, and I've found some. One of them is in Big Thief, and their new album has helped me process this past week in a way that I can understand. Another is in running. I enjoy jogging. It clears my mind, and it feels cathartic. Papa ran plenty of marathons in his heyday, and he was beyond athletic. Later, all that running caught up with him. His knees were paying the price, and he warned his family to do everything in moderation. Whenever he found out that I had started running again, he'd always warn me to not overdo it. But now, especially, I want to go for a run. I want to connect with Papa through one of his great loves. The man ran almost every day. He would use his lunch breaks at work to run through downtown Kansas City. If he couldn't, then he'd go for a run the moment he got home. He and my mom would often go running together, and now I want to go running with Papa.

You just read issue #32 of We Have the Facts And We're Rejecting Your Pitch. You can also browse the full archives of this newsletter.