Show, Don't Tell | On Turning Journalism Into A Comic

In 2013, when the Guardian was still printed on the mid-sized Berliner format (smaller than broadsheet, but larger than tabloid), an illustrated story ran across a double-page spread in the centre of the Family section.

It had ten rows of (mostly) five panels each.

I stumbled on a photo of it recently while working through images on my website. Unless your eyesight is much better than mine, you probably can't read the subtitle in that image. This is what it says:

David and Caro Fickling and their grown-up sons and daughter staked everything on their dream, a new weekly comic for kids. Living and working together can be tough. Interview by John-Paul Flintoff and art by Adam Murphy.

"A Family Saga In Comic Form" was the first piece of journalism I wrote specifically to be illustrated.

But I should rephrase that, to be more precise.

Writing for magazines, I had learned long before (sometimes the hard way) that stories might not be published at all if they couldn't be made to look good with some kind of imagery - usually photos.

Commissioning editors had said to me a thousand times, "Yeah, great story, but what will we use for pictures...?" As an editor I had said it myself, to other writers.

Illustrating this Family Saga was different. The words weren't an addition but would themselves become images. I'm writing this post, nine years later, to reflect on how that happened, and share a few things I learned in the process.

The full-size images are too big to put in an email, so if you'd like to read the comic itself - and I hope you will - there's a link at the bottom of this email.

At that time, my daughter was an avid reader of the weekly comic, The Phoenix. I took her one weekend to a comics festival the publishers organised in Oxford.

There I met Adam Murphy. He was running a workshop, teaching children to write and draw a comic of their own in page of A4 divided into 12 panels. It's a terrific discipline for storytelling, but of course he didn't need to tell them that because they regarded it as straightforwardly thrilling and funny.

So did I. I was a fan of Adam's weekly “Corpse Talk” series, in which a cartoon version of Adam hosted of a chat show featuring eminent dead people. I joined the workshop, and made my own one-page comic.

The Fickling family were there too. It occurred to me that a story about how they put the comic together every week might be good for the Guardian’s Family section.

I suggested it to the editor (full disclosure: my wife), and got the go-ahead.

I fully intended to write the interview up as usual, in prose, to be "illustrated" with some kind of family photo.

But as I was doing the interview with David Fickling I found myself coming up with the idea of doing it as a comic.

And he said, Why don't you? 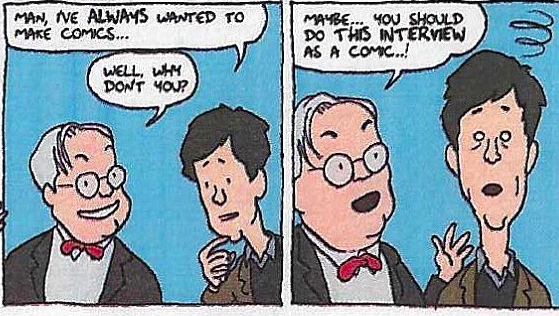 I was thrilled by the idea. Not having published any illustrations of my own, at that time, I asked Adam to collaborate with me.

After all, he already knew the Ficklings.

Initially, I was stumped. How to proceed?

As so often, the solution was simple: just get started.

So I wrote something like a script for the speech bubbles, with “stage directions” of the kind you tend to read in square boxes at the top of individual panels in any comic.

Adam quickly came back to me with a rough pencil sketch that eliminated many unnecessary words and introduced cinematic ideas to change the pace, set the mood, move backwards and forwards in time, and bring in new characters.

Looking back now, I see many ingenious things he came up with that might easily escape notice by somebody gulping the story down. Here are some of those things:

Some of these ideas may possibly have come from me. I don’t remember. But Adam was doing them week in, week out, and if I had the idea I had probably nicked it from him anyway. I don’t think I’m being unduly modest if I give him all the credit.

I learned a lot from Adam, and remain immensely grateful – to him and the Ficklings too.

If you'd like to read the comic in full, this link will take you to the high-resolution images on my website:

You just read issue #30 of Everyday Writing. You can also browse the full archives of this newsletter.