An End to Inktober, A Green Stimulus, An Online Park

Hi there, I’m Duncan and this is Hello from Duncan - a little newsletter I send every ten days about what I’m working on and what’s interesting me. You’re recieving it because you signed up at some point in the recent or distant past. Either way, I appreciate it very much. Thankyou.

Inktober is over, and with it the need for me to be writing generative art sketches on a daily basis.

Honestly, I was a little relieved when the final day arrived - it was quite creatively taxing, particularly in the penultimate week. But I’m proud of what I achieved in this little sprint and I’m really looking forward to developing some of the pieces into larger artworks.

I’ve written up the whole experience in a post on my blog, which also goes into detail about the techniques that I used, the most popular sketches, and what I’m planning to work on next.

If you’re interested in the method behind the magic of generative art, then I think you’ll enjoy it.

I’m starting a little zine project with some dataviz friends.

Over the next few months, we’ll be putting together a small publication around the theme of “hope”. We’re not totally sure whether it’ll be digital, physical, or both (or neither?), and whether it’ll be free, paid, or freemium. But it’s coming.

It’s a one-off for now, but if people (mostly us) like it, then perhaps we’ll make more.

I forgot to mention in the last set of notes that I released a small viualization looking at the “greenness” of different countries’ post-Covid stimulus packages. Here it is: 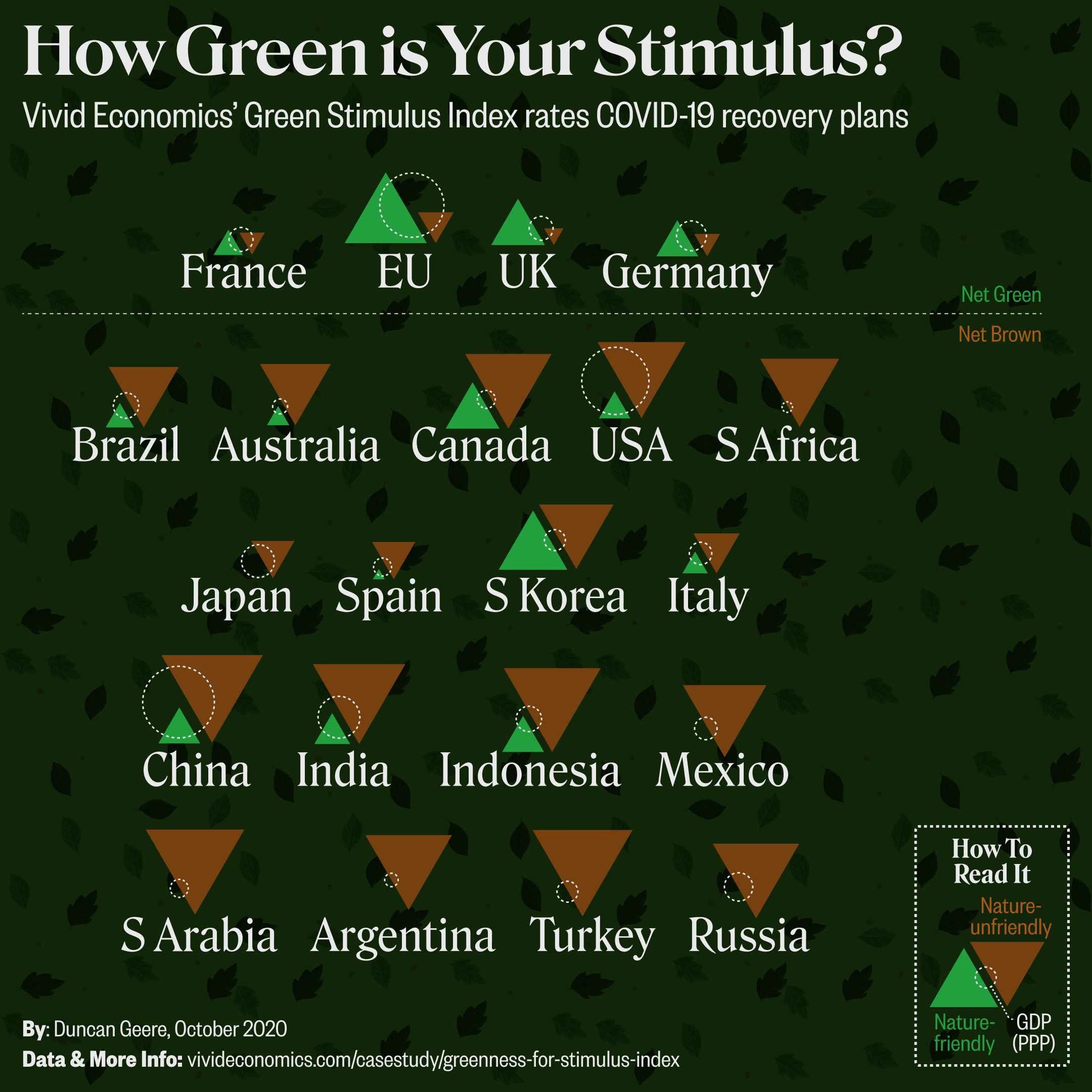 It was a tough one to put together and there are some flaws in it that I’m not totally happy about. The biggest is that GDP of diifferent countries and the relative size of the stimuli are both mapped to the area of different shapes (circles and triangles, respectively), but those area mappings are on totally different scales.

But I’m happy with the broader message the graphic communicates - that most countries are trying to go back to business as usual, not fixing the fundamental problems in society that fed into the state the world is in right now.

I’ve not written about Loud Numbers here in a while, mostly because it has its own newsletter that I write each week.

I’d say we’re about half-way through the hardest and most fun bit, which is creating the sonifications. We’ve got three-ish episodes in the bag out of the first season of six.

At the moment, we’re scoping out a launch in February, but getting there will mean not only finishing off the other three but also writing, recording and editing the episodes - which is almost as tricky and a lot more tedious.

The payoff will be worth it though. I’m really excited about the pieces we’ve created so far, and I think we’re taking sonification somewhere new in the process. I’m planning a talk on the subject that I’ll tell you about nearer the time.

If you want to keep updated (and/or get more Duncan in your inbox each week) then sign up at loudnumbers.net.

My part of Sweden finally has some tighter COVID restrictions. I say “restrictions”, I mean “guidance”, which is about as strong as it gets here.

Where I live, in Gothenburg, it’s now recommended that people refrain from being in public indoor environments where possible, and avoid physical contact with people you don’t live with. There is still no recommendation to wear a mask (and the majority of people don’t), and you can still assemble in groups of up to 50 people. There are no fines or punishments for anything.

I would like to see much stronger restrictions, so I have a few other rules myself. I’m staying at home as much as possible, avoiding public transport where I can (and wearing a mask when I can’t), and tracking my microCOVIDs, attempting to keep them below 200 per week.

But I can’t deny it’s tough to walk past restaurants packed with people having a great ol’ time. It’s a heady mix of self-doubt (“Am I taking this too seriously?”), incredulity (“Don’t they know what they’re doing?”), anger (“How dare they?”) and sadness (“How can people be so stupid?”). I’m trying to be as minimally judgmental as possible, especially when I see friends doing things I wouldn’t do, because I don’t think that helps anyone. But Sweden is not a fun place to be in that regard right now.

“To mend a broken internet, create online parks.” That’s the title and call to action of this nice opinion piece from Eli Pariser, who contrasts these digital public spaces with the “walled gardens” created by tech startups like Facebook and Twitter.

Public spaces are so generative precisely because we run into people we’d normally avoid, encounter events we’d never expect, and have to negotiate with other groups that have their own needs. The social connections that run-ins create, social scientists tell us, are critical in binding communities together across lines of difference. Building a healthy community requires the careful generation of this thick web of social ties. Rapid growth can quickly overwhelm and destroy it—as anyone who has lived in a gentrifying neighborhood knows.

I have created a few different parks and gardens on the web over the years (you’re reading this in one of them right now), and Pariser’s words - particularly on friction and maintainence - are very much aligned with my feelings on how to make them successful. The key is allowing them to be open to all and finding ways to allow everyone who shows up to feel welcome.

But while he calls for parks on the scale of the Apollo programme, I would say that there’s also a role to be played by small neighbourhood parks, owned and cared for on a non-profit basis by a small community. A global (or even national) solution imposed from the top isn’t sufficient on its own. It must be done at the grassroots too.

Here are a small handful I made:

Send me your best creations!

I was asked the other day how I handle ethics with clients. Specifically, whether I screen potential clients on ethical grounds. The answer is that I do - I don’t work for oil companies, for example, and I’m feeling increasingly uncomfortable about doing work for big financial institutions. But it’s not always easy to know where to draw the line, and you can find a reason to not work with anyone if you look hard enough.

For example, I had an edge case recently. An enquiry from a charity which supports people in poorer countries who make their living engaging in a practice that I believe to be environmentally destructive (I’d prefer not to be more specific than that). I ummed and ahhed about it for a while, and eventually decided to take the work but donate half the fee to an environmental charity. In the end, the job didn’t happen but I’m open to working with them in the future on that same basis.

In the wake of the US election, however, which has once again laid bare the widening divisions in Western society, I’m considering a new policy. Right now, it feels more important to be building bridges rather than burning them. So instead of just hunting for points of difference with a potential client, I want to be sure that I’m also looking for places where our values align and take every job on a case by case basis, rather than blanket-banning entire industries.

The risk is that I open myself up to helping companies with greenwashing activities, but I’m going to try to stay alert to that. Nonetheless, I want to default to reaching across the aisle and working with people and organisations that I probably actually have a lot in common with). Ultimately, the only way we can solve the world’s biggest problems is together.

Let’s end this week with a catalogue of 141 optical illusions and visual phenomena, collated by Michael Bach on this wondeful Web 1.0 site. Loads of interesting possibilities there for pen plotter art!

You just read issue #26 of Hello from Duncan 👋. You can also browse the full archives of this newsletter.