A Single Point, A Day Here and There, A Lifetime

Hello, my name is Duncan and this is “Hello From Duncan” - a newsletter that I normally send every ten days, rounding up my most recent creative input and output. You’re getting it because you signed up for it, and there’s an unsubscribe link in the footer if you want out.

Scandalously, it has been 20 days since you last heard from me. I write this newsletter by trying to scribble down a “thing” every day - and even if I miss a day here and there, this usually results in enough stuff after ten days to send a newsletter. When I looked at the list ten days ago, though, it was kinda meagre. It didn’t feel like the rich collection of treats that I normally like to shower you with. So I figured I’d wait another ten days.

But gosh, things have been happening in these 20 days. Since the start of November, we’ve seen the rapid decline of Twitter - which, for all its faults, was until recently still one of the world’s pre-eminent social networks. I don’t need to go into the details here, because you either know everything you need to, or you really don’t care. But it basically turns out that everyone’s hopes about Elon Musk’s takeover have been dashed and all the fears have come true. We are truly living in the darkest algorithmic timeline.

Like many others, I’ve responded to this by departing from Twitter and reactivating my dormant Mastodon account instead - https://vis.social/@duncangeere. Mastodon isn’t as complex as people make it out to be. The only real hard bit to understand is that Mastodon operates like a series of mini-Twitters which can talk to each other, run by different groups or individuals. This means that when you register you need to decide which server to register on. I chose vis.social, which is run by Kristin Henry, and is operated for people working in SciArt, SciComm, data, visualization, creative coding, and related arts and research. I’m also experimenting with posting on Instagram a bit more again, for reasons I’ll try to write about in the future.

In the meantime, I’ve deleted my Twitter post history after backing it up, analysing it, and parsing it to Markdown. I’ve not deleted the account itself, but that’s mainly because I want to keep hold of my username and because for the time being people are still sharing tweets that I might want to click on, and that can be a pain if you’re not logged in. I don’t have any plans to return. I would encourage you to do something similar (or at least download your archive before the site goes down for good).

Meanwhile, an old favourite blog of mine, Techdirt, has written a guide for Elon Musk to the stages that every social network goes through in terms of their viewpoint on content moderation. Happily they’ve published it for the rest of us too. It’s a good read. Definitely makes me not want to buy a social network.

From Robin Sloan’s write up of the results of his Spring ‘83 experiment:

You feel it, don’t you? They’re all crumbling, the platforms of the last decade. It’s unsettling, but/and also undeniably exciting. Tall trees fall in the forest, and light streams in, nourishing places it hasn’t reached in ages.

Okay, that’s enough about social networks for a lifetime, or at least another ten days. What actual work have I been up to?

Well, earlier this year, my sonification studio Loud Numbers did some work for Swiss trombonist Simon Petermann - turning climate data into a musical piece for trombone and electronics. Last week, that piece debuted in the Townhouse Gallery in Cairo, and it was also performed at Sharm el Sheik during the COP27 climate conference.

It was kind of a crazy project - 18 datasets covering every aspect of climate change, from historical CO2, to heatwaves, to glacial melting, to adaptation, and public opinion. The result is wonderful - the haunting trombone pairs perfectly with the pulsing electronics.

You can get a bit of a sense of it from this recording, though unfortunately the sound isn’t great. Hopefully there’ll be a cleaner recording that I can share in the future!

I’ve also been working a bit on my Loud Numbers sonification script for the Monome Norns music computer. The last video I recorded was for version 0.1, and we’re at 0.16 now so I took the opportunity of recording a short video of it doing its thing. 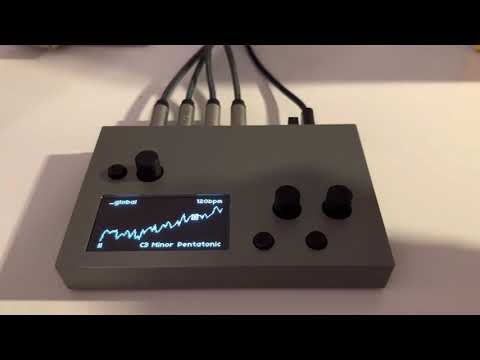 There are a few bits that still need fixing still. Most notably, it turns null values into zeroes, rather than skipping them as it should. I’d also like to give the user the ability to set maximum and minimum data values for themselves if they want to. I’ll continue chipping away at those things in the coming months.

I’ve also been delving into learning some Supercollider with the goal of writing my own sound engines for my scripts. Right now I’m using the default polyperc engine - a square wave with a filter - for almost everything. It’d be nice to do something a bit more creative and less “default”.

If that all sounds very technical and you just want to listen to something. I have broken my pledge to myself not to release any music this year by uploading a track to Bandcamp. It’s called Green Streets, it’s 12 minutes of calm, and it was recorded a few weeks ago, on modular synth, Norns, and bass guitar. You can stream or download it for free, or pay whatever you like.

If you rather liked that and want a little more, I’m partnering up again with photographer Oliver Holms for a second season of our Signal Chain newsletter.

Here’s how it works:

We’re taking turns to send photographs and music to each other. Each new piece is inspired by the piece before. We’re building a chain of influence together and you’re along for the ride. New instalments are released on the 1st and 15th of every month.

This time, Oliver’s kicking off the series - so go sign up and then look out for an email in your inbox on 1 December with a no-doubt-beautiful photograph attached.

The cartographically-inclined amongst you will know that there’s a difference between the magnetic north pole and the actual north pole, and that the former constantly moves around depending on the tides of magma inside the Earth’s core. Kinda wild when you think about it. To add further complexity, Ordnance Survey - the mapping authority of the UK - has another north. Their “grid north” differs slightly from lines of longitude due to the difficulties of spreading the curvature of the Earth flat onto a map.

You can just imagine the absolute scenes inside Ordnance Survey when they realised that for the first time ever, those three “norths” would be coinciding at a single point that moves across the country. At some time in the last few weeks, the triple-point made landfall near Langton Matravers on the south coast’s Isle of Purbeck, close to Poole. It’ll pass through Chippenham and Birmingham next year, before reaching Hebden Bridge in August 2024. It’ll then cross the Penines, and leave the landmass of Great Britain in July 2026.

If all that sounded terribly confusing, there’s a video which doesn’t make it a whole lot clearer, but at least has some pictures.

Finally, I’ll leave you with this fantastic article from Georgina Sturge on “How Bad Data Infiltrated British Politics”. It contains this wonderful truism:

Data will tend to offer us solutions based on what we decided was important enough to count and measure in the first place.

That’s all from me today. See you in ten days. Who knows if Twitter will still exist then?

You just read issue #94 of Hello from Duncan 👋. You can also browse the full archives of this newsletter.