A Constant Presence, A Threshold, A Kind of Actionable Optimism

Hello friends. Duncan here, with my regular “Hello From Duncan” newsletter. This, as I’m sure you know by now, is a roundup of my recent creative input and output that I send three times a month. You’re getting it because you signed up for it, and you can unsubscribe at any time with the link in the footer.

My biggest creative input over the last ten days has been hiking Kullaleden - a four-day trail along the western coast of Skåne in southern Sweden. The distance is offficially listed as 70km, but with small extra bits at the start, the end, and various detours along the way, we ended up walking about 100km (62 Imperial miles, 10 Swedish miles) over the Easter weekend.

Last year, around the same time, I walked Gotaleden - and I wanted to follow that up with something similar. We had good weather, and the trail was very flat for a lot of the way, with steep bits only on the Kullaberg peninsula, which served as the half-way point along the journey. 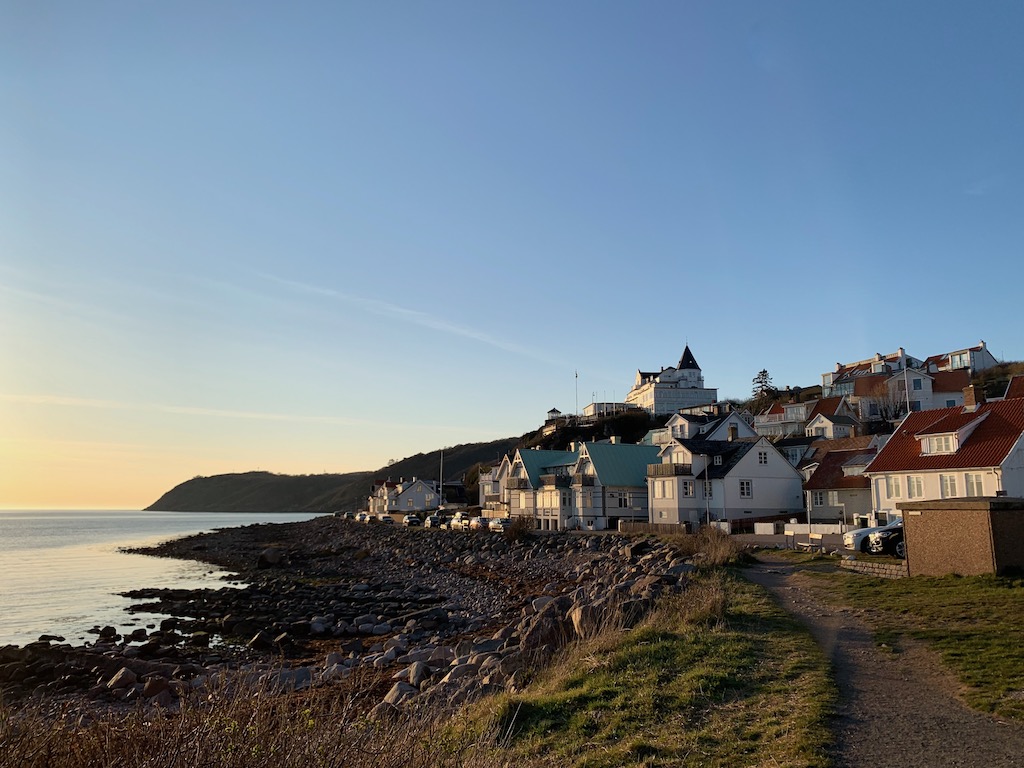 Unlike Gotaleden, which was mostly forest and road walking, Kullaleden was less paved and more coastal - with the sea a constant presence on the left hand side. We were walking through seaside villages, rather than the commuter towns of Gotaleden, and much of the space in between was taken up by nature reserves.

Mostly it was a wonderful break where my only to-do list item each day was to get to that day’s destination. It felt great to be outdoors and moving - and at the end of it, I wasn’t exhausted, I was ready to do more.

Next year, I’d love to block out a whole month and walk a much longer stretch. Perhaps St Olavleden, up in Dalsland? Let’s see…

Thanks to those of you who got in touch about the VCV Rack sonification module I wrote about last time - lots of interest there. Tom Armitage sent over a link to Brendan Byrne’s catalogue of home-made modules, which includes one called “World Clock” that has six different clock outputs that match the average rate that new humans are born on different continents around the world. Really cool. Tom wrote:

I love World Clock because it straddles that gap between “random source” and “clock” but has no meaningful control; it’s effectively six fixed tempos and you just put up with it. I like how its “intent” is largely visible only to the performer, rather than the audience.

Inspired by the above, I’ve built a small single-purpose Norns script that does one thing - emitting a tone with a pitch that represents the concentration of CO2 in the atmosphere. The script is called “ppm”.

Pre-industrial CO2 levels were about 278 parts per million (ppm), which I’ve mapped to the lowest C note on a piano keyboard (C0). When concentrations hit 507ppm, we’ll likely have reached 1.5C of warming, a threshold for severe climate impacts on people, wildlife and ecosystems. That value is mapped to middle C (C4). Right now, we’re at 419ppm - more than half-way to the threshold.

In the description of the script I wrote:

There are no controls. To change the output frequency, change your habits and elect politicians who support strong and immediate climate action.

The goal of most Norns script is to make something that’s either useful or sounds good. This does neither of those things. It exists solely to get people to think about the climate crisis when they’re making their art.

If you have a Norns, you can download it from the Maiden catalogue. If you don’t then stay tuned - there’s a good chance I’ll make it into a website in due course. When I find a moment…

I’ve also made a little more progress on my sonification module for VCV Rack. I got a bit stuck on how to add custom widgets to my front panel, but luckily an experienced C++ and VCV Rack coder got in touch and helped me get a visualization of the data working.

My next step is to hook up a button that allows the user to select a CSV file containing data, and a column from that file, then replace the current hard-coded data with their selected data. It’s a process that’s fairly easy to describe, but tricky to implement. I’ll keep you posted on my progress.

Nasa has published an incredible new map of the observable universe, showing everything we can see from our vantage point, half way along one of the spiral arms of the Milky Way.

Honestly, I mostly just want to steal band names from its edges - the Sculptor Wall, the Northern Local Supervoid, Giant RGB Ring (this looks like a typo - it should actually be GRB), Corona Borealis and the Horolgum Supercluster.

My Signal Chain pop-up newsletter collaboration with Oliver Holms has finished its season one run, and now’s a good time to go back and binge the whole lot (start at the bottom).

It has been a really fun experiment - putting an odd- but interestingly-shaped frame around some of my musical work, setting up a regular but not too intense deadline, giving me practice writing about my music, and deepening my friendship with Oliver. It feels like it was just the right length too - chunky enough to be a notable piece of work, without being overbearing.

At some point I may try to get a short EP together out of the tracks and put it on Bandcamp under a pay-what-you-want pricing system or something. Look out for that.

Speaking of Oliver, the other day we were chatting about being optimistic about human nature, and the work of (https://en.wikipedia.org/wiki/Elinor_Ostrom)[Elinor Ostrom], and the differing worldviews of Steven Pinker and Rutger Bregman. I wrote that I lean towards the latter in part because I’d prefer the world to be that way, and then we talked a little about the value of learning towards seeing the world as you’d like to see it in situations that are uncertain. A kind of “actionable optimism”.

Oliver also pointed me towards an old blog post of Kevin Kelly’s where he talks about Protopias: positive visions of the future that are grounded in a pragmatic sense of what’s possible given technology and human nature. Basically a near-future world slightly improved on our own, which still has many of the old problems and some new ones, but is still nonetheless “better” in a small way.

A good, and more manageable goal to aim for than a full-on utopia, of the kind I explored in my Ekistics project in 2020.

I spent a lot of yesterday evening listening to the radio. Specifically, this short-wave receiver located at the University of Twente’s amateur radio club. It’s lovely to scan through the airwaves and catch little snatches of distorted speech, music, and even morse code. You’ll find some particularly interesting oddities shared in the chatbox - like short-duration Russian military broadcasts, and a German-language propaganda station broadcast by North Korea. Great for sampling, or just having on in the background while you work.

Finally, after sitting on the fence for a while and weighing up the evidence, over the last year or so I’ve come round to the argument that carbon offsets are largely a waste of time - both from a financing climate solutions point of view, and from a reducing carbon emissions point of view.

There’s a good summary of the evidence against offsets in this Twitter thread from Bloomberg reporter Akshat Rathi. Basically, the data shows that offsets are not only ineffective but also primarily a tool for greenwashing. Even well-meaning, well-funded organizations with the right incentives and right governance structures can’t get them right.

That’s all for this time. See you again in ten days.

You just read issue #75 of Hello from Duncan 👋. You can also browse the full archives of this newsletter.