A Blogroll, An Ideal City, A List of Questions

My name is Duncan, I’m a writer and information designer, and one day the stars aligned and you joined my mailing list. I hope that sounds familiar, but if if not then I hope you give it a chance anyway.

Lots to talk about this week, so let’s get stuck in.

Remember when everyone had a blogroll? You probably do not, but I do. It was wonderful to see what the people you read were reading.

So I’ve posted a list of blogs that I like the most right now. Got a recommendation for me based on that list? I’d love to hear it.

I spent a nice chunk of this afternoon reading The Complete Guide to Deep Work, based on Cal Newport’s 2016 book of a similar name.

It’s based on the theory that work can be divided into two categories - shallow and deep. The former requires little concentration, and could easily be done by someone else. The latter requires focused attention, specialised knowledge or training, and creates new value in the world.

While the ultimate goal is to eliminate as much shallow work as possible, the guide is more about strategies to avoid getting caught up in it and safeguarding space to do deep work instead. That’s accomplished partially by reducing external distractions (meetings, email, etc) and partially by reducing internal distractions (by training yourself to resist the urge to get up for a snack every 10 minutes).

It’s a good read for those of you who find larger projects slipping away in the daily swirl of emails and Slack and Twitter, and even includes some tips for getting your boss on board. Give it a read.

One of the larger plotter projects I’m working on is called Dataplotter. The idea is to use the plotter as an animation and storytelling tool, drawing out charts and then annotating them by hand with voiceover.

I’ve got a good candidate for my first one - about oil demand and prices over the last half century. I think those who know the story will enjoy the different format, and those who don’t will learn a lot about the world.

I’ve drawn out the first chart (with Flourish and Figma) and did a test plot today. There are a few bugs to fix, for sure, but that’s why I test plotted. I’ll work on those over the weekend and early next week.

I’ve written up a short blog post about ideal cities and my Sforzinda plot from a couple of weeks ago.

It ties a few threads together that I’ve been lightly following for most of my career - that of the concept of a perfect, self-sustaining city. Over the years I’ve written about how SimCity 2000 laid a utopian streak in me at a formative time in my life, about the concept of arcologies and some of my favourites, and even tried to build one myself in a videogame.

In that context, it’s probably not surprising that I wanted to plot one too. In fact I want to plot lots. Do you have a favourite “ideal city” or utopia concept from history? I want to hear about it (and plot it). Drop me a line.

I had a minor breakthrough in my generative art setup today. I successfully converted a P5.js sketch into a Rune.js sketch, saved it out as an SVG, and plotted it.

I’m sure many of you will be unfamiliar with many of those words, so let me attempt a translation. Let’s say you’ve composed a poem in a language that has no written form. To print it in a book, you need to translate it to another language that does have a written form. That’s a bit like what I’ve done here.

What’s more, I set it up so I could use both P5 and Rune functions at once, so in our metaphor I’ve perhaps kept a few aspects of the original language that aren’t required to be written to help me better convey what I want to convey.

The upshot is that I’ve now got a setup that lets me write code that generates images in a language that my plotter can understand. This is a good thing, because it means I can now plot more things.

One of the most common things that people draw with plotters is geometric art - spirographs and so on. If you check out the #plottertwitter hashtag, you’ll see there’s a lot of it about. I like geometric art, and it’s nice and easy to do in code, but I want to do something different, so I’m going to try and make it a relatively small part of my work going forward.

I’ve written up an extended remix of my comments from last time about height noise, if you’re curious. It includes a brief explanation of what Perlin noise is, and how I use heightmaps as noise for generative art, as well as some code if you want to try it yourself.

Also in plotterland, my cousin is a microbiologist and he asked if I would be willing to plot some of his experimental data. Of course I was willing. After a bit of work winnowing down the 80,000(!) data points he first sent over to just 2,000, it plotted quite nicely. It’s much closer to the original use of plotters (in the 1950s-70s) than most of the work I’m doing, but I think it came out pretty nice in the end. 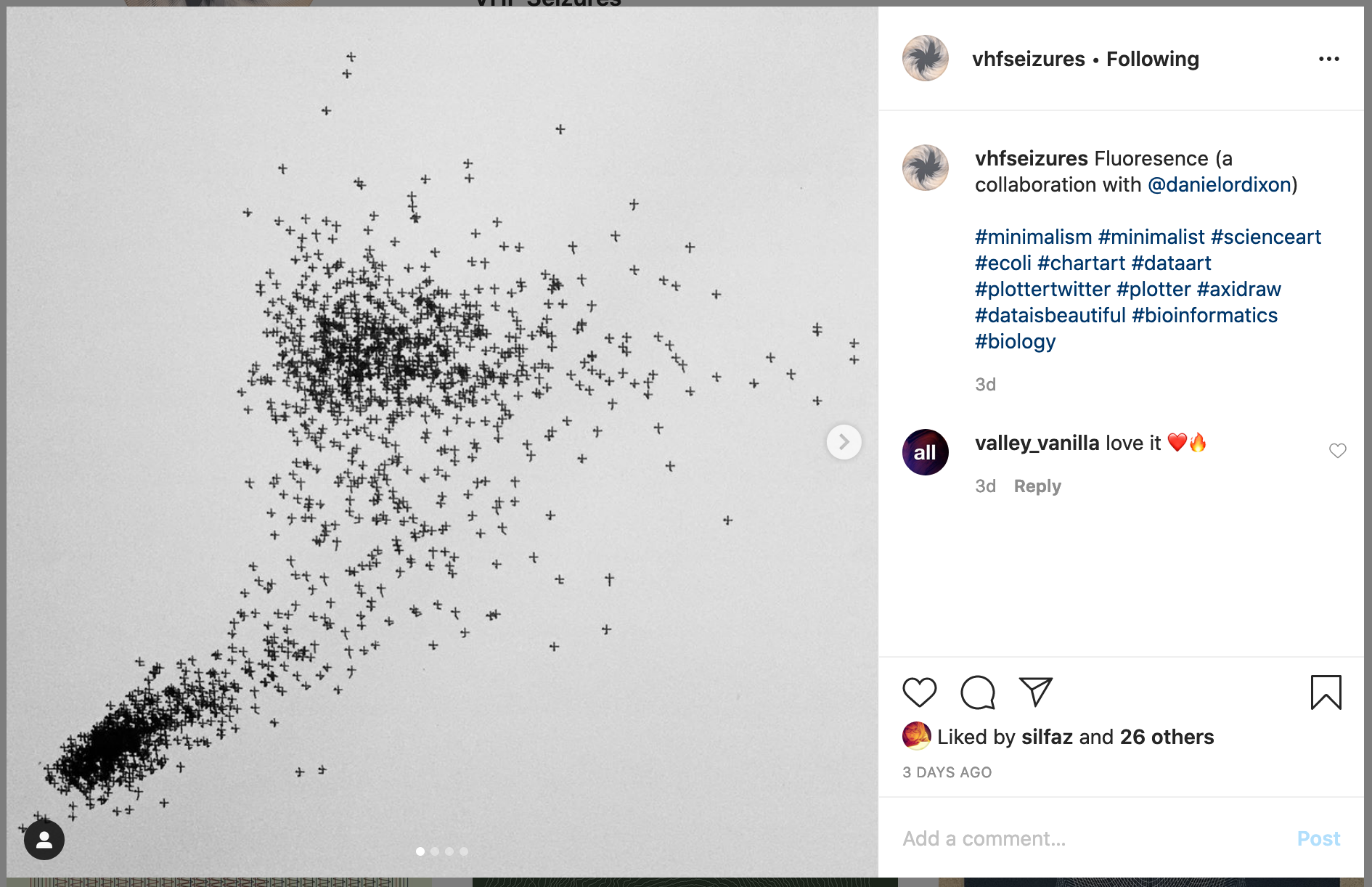 One of my favourite “misc stuff” newsletters is Dense Discovery. It’s beautifully designed, full of interesting stuff, and frequently offers practical tips for minimising your environmental impact. This week, it includes a great list of questions you should ask before a major purchase.

In addition, I’ll add a tip of my own that has worked for me since I started doing it in January. Keep a list of “things I want” on you at all times - maybe in the notes app on your phone, or in a notebook you always have with you. Then, when you feel that feeling of wanting to buy something, write it down on your list.

This helps in three ways - first it gets the BUY THE THING urge out of your head and allows you to think about something else. Second, if you keep writing down the same thing on the list then it suggests it’s a genuine need and not just a passing feeling. And thirdly, when your birthday or Christmas rolls around and your loved ones ask you what you want, you’ve got a ready-made list to send them.

I’ve been setting up my computer to record audio for the first time in ages. I used to record quite a lot when I was making music, but I’m a bit rusty on what the latest hotness is when it comes to recording. Turns out there isn’t really a latest hotness, it’s the same old software.

The reason I’m recording audio is for my first Dataplotter graphic (see above). I want high-quality voiceover on YouTube, so that means busting out my old Blue Snowball and hooking it up. Turns out it still works a treat, and with the help of Cakewalk (Windows only) and the Trileveler 2 VST plugin, I was able to get some nice sounding audio out.

Update: I found a USB interface in stock that isn’t too pricy! The Focusrite Scarlett Solo 3rd Gen. Adding a nice microphone (the Audio-Technica ATR2100x-USB from Marco Arment’s wonderful list of podcasting microphones, a pop filter and a boom arm gives me a really nice setup for the relatively low entry price of €200, so after running it through the “should I buy this” questionnaire above, I invested.

All this to say - if you invite me on your podcast in the future, I’m gonna sound great.

About a day after I blogged about ideal cities (see above), I came across this lovely long read from the New York Times, published last August. It’s about the Italian town of Ivrea, home of the Olivetti corporation (who made beautiful typewriters for many years).

For a while I’ve been trying to find a nice streetmap of a town that’s not too large to plot, and Ivrea seemed like a great candidate, so I asked my pal Giuseppe (who has a great newsletter) to generate some coloured roads for me. He delivered the goods, the file was small enough, and the result was an hour-long plot. 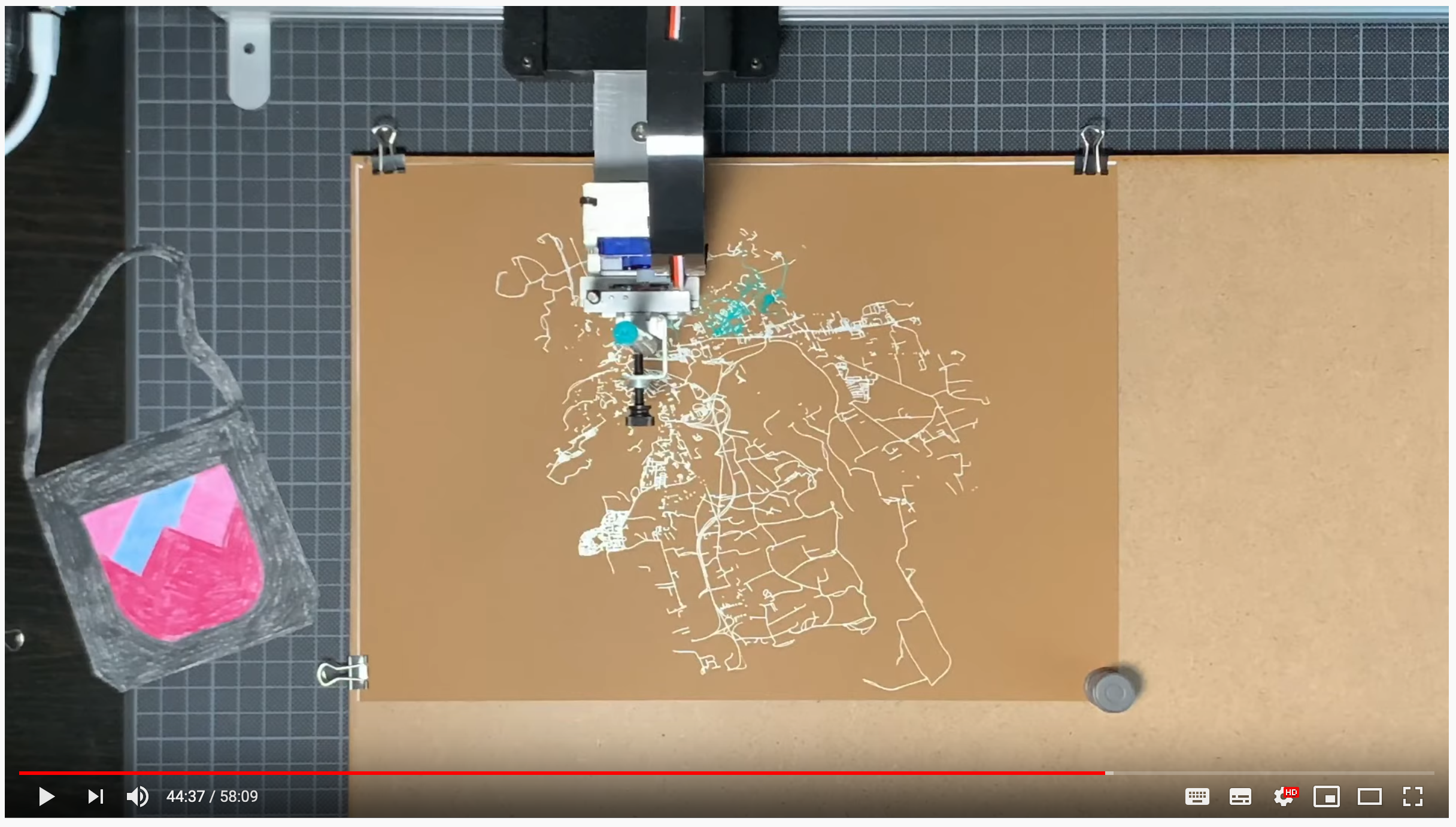 I’m pretty happy with the results (especially as this was my first time using OBS to stream), but next time I think I’ll run the plot and the streaming from different computers. The CPU load was a bit much for my poor MacBook. OBS works on Windows, and I should be able to send video wirelessly from my phone to my desktop PC (which has a nice GPU for video processing), so I think it’ll work nicely.

I’ll leave you this week with Wired founder Kevin Kelly’s 68 bits of unsolicited life advice for his 68th birthday.

Over the long term, the future is decided by optimists. To be an optimist you don’t have to ignore all the many problems we create; you just have to imagine improving our capacity to solve problems.

Enjoy, and see you again in ten days.

You just read issue #8 of Hello from Duncan 👋. You can also browse the full archives of this newsletter.