Welcome to the first edition of The .NET Core Podcast newsletter for August.

As you can tell from the title of this newsletter, we’re almost a whole year into creating the podcast. For those who haven’t heard the earlier episodes, I’d recommend going back to the first one and catching up

As we’re one year in, I thought that I’d share the download stats as reported by the podcast’s host: 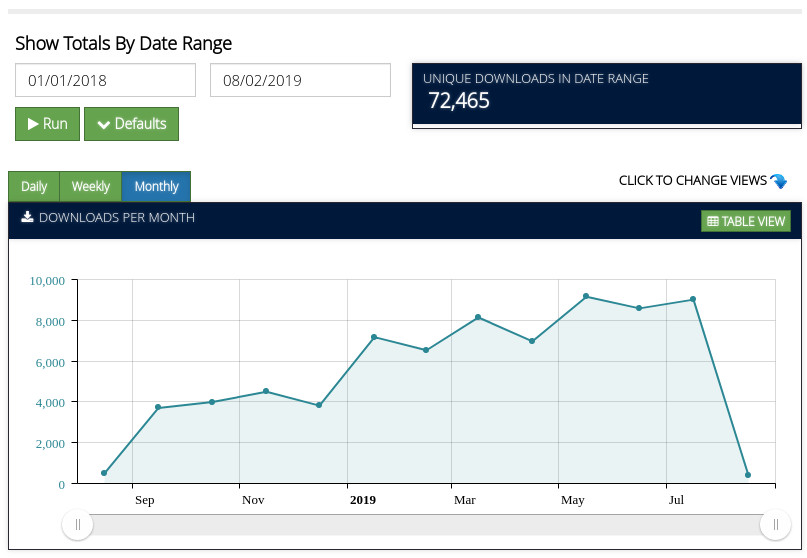 here's a direct link to the above image, in case it doesn't load in your email client

I think you’ll agree that the upward trend is amazing - the drop at the right-hand side of the chart is because the total downloads in August (both days of it) currently stands at 393 - and that’s all down to all of the wonderful folks who listen to the show and share it with their developer friends and communities. So thank you all for that.

As a way of celebrating a whole year of episodes, I’ve decided to run a competition for the length of August. You can find out about the competition, how to enter, and what you might win, in this video:

here's a direct link to the above video, in case it doesn't load in your email client

tl;dw (too long; didn’t watch): I’ve got some things to give away, and would love to give them away to engaged listeners. To show that you’re engaged, you need to do at least one of the following:

Any one of these during August is a single entry into the competition. Doing more than one of them will result in multiple entries.

And here’s to another year of episodes!

You’ll notice that this edition of the newsletter is sponsored by Rider from JetBrains. I just wanted to mention that I only look for sponsors who create tools that I actually use. As such, I want to point out that I’ve loved using Rider since it was in the initial EAP

A lot of things have happened in the community recently. We have .NET Core 3.0 Preview 7, we’ve got the new .NET Core samples site, and we’ve got .NET Conf coming up. Not to mention things like the A-Z of .NET Core, and Feature Flags. Be sure to scroll down to the community links area to learn about each of them.

Episode 30 - Reflections on .NET with Pablo Santos and Phil Haack

This episode was published to Patreon supporters a few days ahead of the “regular” RSS feed on July 24th, 2019 at 12:30 GMT.

In this episode of The .NET Core Podcast, we talked with Pablo Santos and Phil Haack about the .NET ecosystem, where it has come from, and where it might be going in the future

The episode was later released to the “regular” RSS feed on July 26th, 2019 at 12:30 GMT. The show notes, including a transacription, are available at: Episode 30 - Reflections on.NET with Pablo Santos and Phil Haack

This episode will be published to Patreon supporters a few days ahead of the “regular” RSS feed on August 7th, 2019.

This episode of The .NET Core podcast is a discussion with Thomas Betts on the ways that you can level up your career, and how studying the Liberal Arts can help with being able to connect with your customers and clients at a deeper level.

As of sending this email out, the interview with Thomas hasn’t been released yet, but will be available on August 7th, 2019.

Once it has been released, you’ll be able to check out the show notes at: Episode 31 - The Liberal Arts and Levelling Up Your Career with Thomas Betts.

I had the chance to meet him in person at MS Ignite, back in February this year

and he was willing to talk to me about Xamarin. We discussed the Mono tool chain, the fact that you can run .NET Core apps on Fridges - and his plans to do an on stage demo with a Fridge - and that you can use the Mono linker in your .NET Core build chain.

> In fact, someone was saying that the day that Mono lifted 120,000 unit test from .NET Core; could literally just lift them up, drop them in, run them, and they all just passed

Full show notes, including a full transcript of the episode and an embedded player are available here

As mentioned in the July’s second edition of the newsletter

titled "Vacation Time!" and here it is in the archives

I’ll be attending NDC 2020. I won’t be speaking, but I will be there for the duration of the conference (both the workshops and the conference proper).

and that podcast is called the Waffling Taylors

So if you’re going to be at either of these events and spot me, do come over and say hello. I’m planning on having some swag to give away to folks who do say hello to me, so you wont walk away empty handed.

A wonderful article written by Thomas Betts (he’ll be on the next episode) about just how the Liberal Arts can help engineers to connect with fellow engineers, clients, and customers, and to understand the problem domain more deeply than other engineers.

Listener Nick Proud was moved to write an article about how we should all be taking cross platform .NET seriously. I would definitely recommend giving it a read for a wonderful view on why your fellow engineers should be looking into .NET.

Whilst this isn’t directly related to .NET Core, I do love to read about how other folks are doing automation. The author of this post is Dan Slimmon, who works over at Hashicorp

as in the folks who maintain Kubernetes

I’m a big fan of automating things, and have written .NET Core global tools and templates specifically to automate the boring things. In fact, at the beginning of each episode I say

> lets sit back, open up a terminal, type in dotnet new podcast and let the show begin

and that’s literally how I start work on each episode.

This blog post is a great introduction into writing a script for automating anything - the example used is setting up a new employee - by prompting the user to perform an action. Which is a great way to start when attempting to automate something:

There are a lot of new things coming in .NET Core 3.0 and C#8, and IAsyncEnumerable<t> is one of those APIs. I’ve mentioned that the Elvis operator is my favourite C# operator

I mentioned it in episode 30, by the way

but IAsyncEnumerable<t> might end up being my favourite new API. I’d recommend that you read the article, but the tl;dr is that you’ll soon be able to do something like the following:

and you’ll be able to return IAsyncEnumerable<t> from controllers, too:

As per the title, this blog post shows you how to get started with Health Checks in ASP.NET Core. I would read this post alongside Gunnar’s follow up post Avoiding ping flood in ASP.NET Core health checks for a great way to expose an API endpoint in your application which allows you to check on the health of your API and the external endpoints that it relies on.

Which seems incredibly useful as we move towards microservices.

You just read issue #15 of The .Net Core Podcast Newsletter. You can also browse the full archives of this newsletter.