.NET Core 3.1 Is Right Around The Corner

Welcome to the first edition of The .NET Core Podcast newsletter for November.

A quick update on the “situation”:

In case you missed it, earlier this week my home office was flooded and it took out the majority of my equipment. In less than 24 hours since I posted that newsletter, the level of supportive messages - from “sorry to hear that,” all the way to “how can I help?” - has been absolutely astounding.

To everyone who shouted out with kind messages of support: thank you so very much.

You may not think it, but simply saying something like “sorry to hear it,” really helped me to realise just how much support there is out there for this show - and for me, too.

You all might be excited to know that it’s in the hands of my insurers now, and I’m looking at getting the show back on the road within the week. My home office will be out of commission for a lot longer, but that doesn’t stop me from publishing the next episode of the show.

As 2019 comes to a close and - here in the Western hemisphere, at least - the night draws in and the days get colder, I start to reflect on the show over the past year. The first thing that stands out is that there was no newsletter in October, something which I put down to the preparation for and reporting on EGX.

which is a sister show, of sorts, for this one

but you can read (and listen) all about it here.

We’ve had a number of amazing guests on the show, and that trend will continue as we move into 2020. Here’s a list of guests who have been on the show since the last edition of the newsletter:

And looking foward to the end of the year, we have:

With that said, let’s take a quick look at how the podcast stats stood when I was writing the previous newsletter: 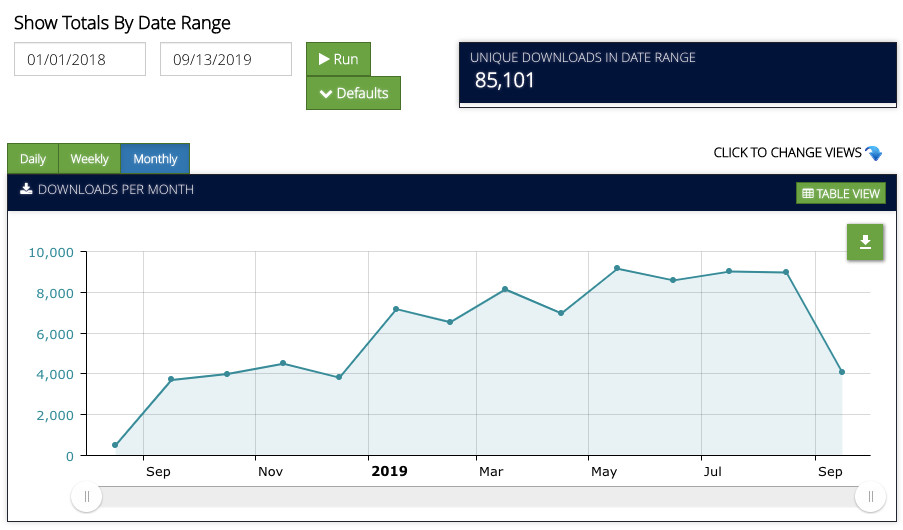 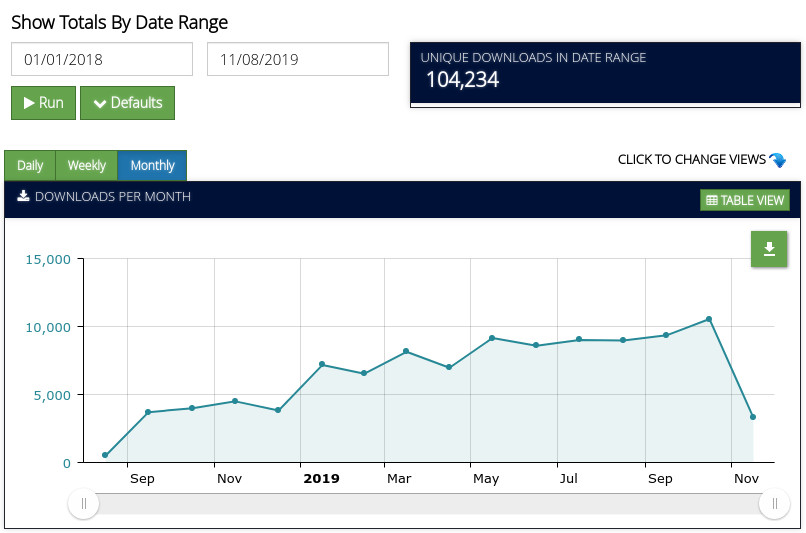 mainly because it could just be some server farm somewhere

at the time of taking the screen shot

is monumental to me. I can’t thank the community enough for the sheer number of downloads and the continues growth that the show is seeing.

I’ve been a member of the PIT community for a while, and I can personally attest to the wonderful work that they do. In fact, a number of the transcriptions for the show where provided by PIT

Since it’s been a while, I thought I’d list all of episodes which came out between the last newsletter and this one.

This episode was published to Patreon supporters a few days ahead of the “regular” RSS feed on September 18th, 2019.

In this episode I interviewed Stuart about F#, Giraffe and how the functional programming model can be incredibly useful for web developers. Along the way, we covered Fabulous, what Elmish means, and the MVU architecture.

I would recommend giving this episode a listen if you are interested in diving into the world of functional programming.

The episode was later released to the “regular” RSS feed on September 20th, 2019 at 12:30 GMT. The show notes, including a transcription, are available at: Episode 34 - F# and Giraffe with Stuart Lang.

This episode was published to Patreon supporters a few days ahead of the “regular” RSS feed on October 2nd, 2019.

In this episode I interviewed Jon Smith about Entity Framework Core, what it is, and how you can use it to speed up development of your applications. We covered the difference between EF and EF Core, and he shared some great tips on how to get the most performance and stability out of EF Core.

Jon is also the author of Entity Framework In Action from Manning.

psst. don’t forget to use the code podnetcore18 for a discount, if you do buy his book - which I’d recommend

The episode was later released to the “regular” RSS feed on October 4th, 2019 at 12:30 GMT. The show notes, including a transcription, are available at: Episode 35 - Entity Framework Core with Jon Smith.

Episode 36 - .NET Core and the Raspberry Pi with Al Rodriguez

This episode was published to Patreon supporters a few days ahead of the “regular” RSS feed on October 16th, 2019.

In this episode I talked to Al Rodriguez about using .NET Core on embedded devices like the Raspberry Pi. We covered a number of different IoT options, including the FEZ and Meadow Project; we also talked a little about the TinyCLR.

Al also has a wonderful podcast called “Developer Side Quests”, which is currently on hiatus.

The episode was later released to the “regular” RSS feed on October 18th, 2019 at 12:30 GMT. The show notes, including a transcription, are available at: Episode 36 - .NET Core and the Raspberry Pi with Al Rodriguez.

This episode was published to Patreon supporters a few days ahead of the “regular” RSS feed on October 30th, 2019.

In this episode I talked to Mogens Heller Grabe about using Rebus with your .NET applications. Rebus is a system which implements a service bus achitecture. Mogens also has a brewery called The Alley Beer Company.

The episode was later released to the “regular” RSS feed on November 1st, 2019 at 12:30 GMT. The show notes, including a transcription, are available at: Episode 37 - Rebus and Messaging Queues with Mogens Heller Grabe.

This episode will be published to Patreon supporters a few days ahead of the “regular” RSS feed on November 13th, 2019 at 12:30 GMT.

On release day, you’ll be able to check out the show notes at: Episode 38 - Rider with Kirill Skyrgan. However this link will not work until 12:30 GMT on release day, which is November 15th, 2019.

who will be on the next episode

and I wanted to revisit this episode because of the subject matter: in this episode of The .NET Core Podcast we talk to Matthais Koch about Nuke, what it is, and how you can use to simplify your builds.

Show notes, a full transcription, and an embedded player are available here

I’ll be attending NDC London 2020 in January 2020, and will be sticking around for a few days afterwards as I’ll be meeting up with the folks behind the Arcade Attack podcast

as part of the Waffling Taylors

So if you’re going to be at NDC and spot me, do come over and say hello. I’m planning on having some swag to give away to folks who do say hello to me, so you wont walk away empty handed.

Friend of the show James “Cynical Developer” Studdart recently gave a talk on how a lot of companies implement Agile in a way which is incredibly fragile. I’d recommend watching both part one and part two to get the full point, as James raises a lot of good points.

This is the beginning of an amazing looking series on security concepts for applications running ASP.NET Core 3.0, and totally worth a read. So far there are only two parts

here's a link to part two

and both parts are laying the foundations for the wider code base and description. But it will be keeping this series bookmarked.

This is an incredibly useful resource, and I’ve been using it since it was first announced back in the early days of .NET Core’s development. Essentially, it’s a searchable index of every .NET API - whether it’s an API in Core, Framework, Mono, Unity, etc. - Searching for an API will tell you which namespace it is in, and which versions of the many runtimes and SDKs support it.

For instance, here is part of the catalogue page for `string.Equals(String,String,StringComparison): 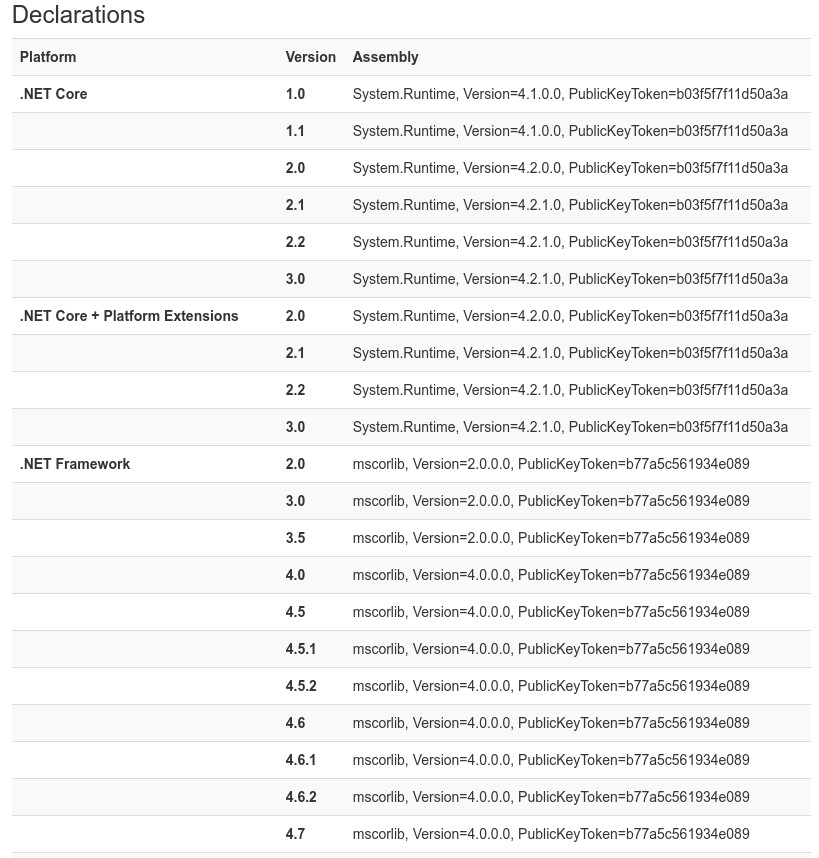 I share this link with fellow .NET devs on a daily basis.

I honestly think that it’s a fantastic piece of innovation from Steve Sanderson. I’m also a lover of productivity, as such any tool which can help me to achieve my goals in teh fastest way will always get a vote from me.

Radzen is a great way to scaffold Blazor applications - much better than dotnet new blazorwasm - and not just because it has a GUI. It literally walks you through every step of scaffolding the application.

Definitely one to watch.

We’ve all done this. In fact, it’s one of the many things that I remember was in a company-wide NuGet library at an old job. However, this wonderful piece of C# is even better than the old version that I used to use (which used an attribute dectorator and some funky string formatting), as it’s exposed as a ToDescription() extension method.

Those who are asking how often they’ll use this haven’t implemented enum driven selects on an MVC application yet. Keep this link around for when you do.

Keeping extension methods in mind, I really love Guard Clauses and think that everyone should use them. This github repo from Steve “Ardalis” Smith

has everything you need to get started in creating them.

“What is a Guard Clause?”, you might ask. Here’s an example, taken directly from Steve’s GitHub:

which will throw an ArgumentNullException if the order variable is found to be null. I personally think this is better to read than:

You just read issue #20 of The .Net Core Podcast Newsletter. You can also browse the full archives of this newsletter.