A Value-Added Tax for Schools

There was a brief moment when school funding in the US could’ve gotten better. It was the early 1970s. After decades of court cases challenging Brown v. Board of Education, federal district judges were finally putting muscle into desegregation efforts. Bussing took center stage as a tactic to enforce Brown’s call for equal education. While it pissed a ton of people off (mostly white, but also some nonwhite) and probably wasn’t the best way to achieve equal education across racial difference, bussing was what marxists would call conjunctural: it found one of the weakest links in the chains of US oppression and hammered on it, hard.

Meanwhile, civil rights lawyers were going for the throat. They kept bringing school finance cases to state courts, showing how educational resources were illegal because they were so racist and unequal. Then a big decision came down in 1971. The California Supreme Court decided in Serrano v. Priest that the state had to provide equal school funding to every district no matter its property values. It was amazing.

Across the political spectrum and across the country, people in positions of power were racing to figure out what to do. Bussing was creating an enormous social pressure. They also didn’t want more Serrano-like decisions. There was an urgency to think transformatively about school funding systems.

Enter Richard Nixon. A conservative known for enigmatic approaches to big social problems (that sometimes feel leftwing to this day), he wanted to stop the bussing pressure and saw school finance as a way to do it. Even Derrick Bell, Jr., civil rights lawyer and co-founder of CRT, agreed. He said the way to integrate would be to desegregate the dollars.

The question was how. Enter the value-added tax.

Nixon created a commission to study school finance. The plan they came up with–and that he strongly endorsed–was to replace the main source of school funding in the United States. Instead of municipalities collecting taxes on property, the federal government would collect a tax on products at every stage of production. Every time a firm added value to the product, they had to a pay a small tax. (This is different than the retail sales tax, which is just collected at the point of sale and entirely shouldered by the consumer.)

This “value-added” tax or (VAT)would slightly increase prices too of course, since firms would have to do markups to account for the charge, but (unlike the retail sales tax) it’d be deductible on their own taxes and, Nixon thought, would generate a ton of money to pay for schools. Ultimately, rightwingers without Nixon’s penchant for controversial proposals shot down the idea. The report they pubished in response to his proposal, while very ungenerous, actually had a pretty sweet cover. 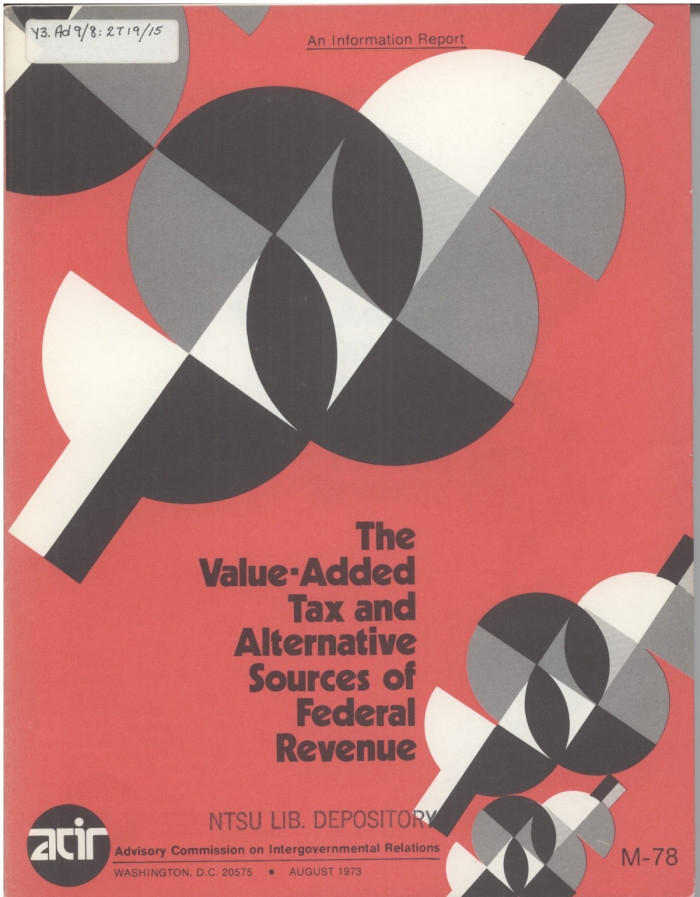 We all know what happened to Nixon of course. This idea of a VAT for schools got caught up in the churn of Watergate, his resignation, and well-deserved fall from grace.

It’s all VAT and a bag of chips

The VAT) was a German idea from the beginning of the 20th century. The country needed a way to generate revenue in the wake of huge war-time debts and put it in place. Other countries tried it too and eventually became a cornerstone of public provision. Most countries around the world have a VAT in some form. In the map below, all the red countries have a VAT while the blue countries don’t.

Like Greenland, North Korea, and Saudi Arabia the US doesn’t have a VAT at the national level. We’re definitely behind the times. All OECD countries have one except the US. Some states have tried it, though. The Brookings Institute recommended that Alabama and Iowa adopt it in the 1950s (they didn’t), but Michigan did in 1958, only for it to be repealed in 1967 in foavor of corporate and personal income tax.

I think socialists should consider backing a VAT for schools. Here’s a few reasons:

But just imagine pulling the rug out from under the whole local property tax/school finance situation. It’d really throw US capitalists for a loop. Using a VAT to fund schools removes a keystone from the fortress of white supremacist real estate markets that determine so much about social and political life. Differences in property value determine differences in school revenues (and then vice versa), which go on to determine spatial, cultural, and economic distributions. Think about the deep, terrible meaning of “good schools” and “good neighborhoods”, all the dislocations these perpetuate. With a VAT, these can’t have so much determinative power.

Furthermore, it undercuts the prospect of taxpayer revolts at the state and local levels. All the sturm and drang of those high-inflation days in the 1970s that ultimately brought Reagan to power was driven largely by white people who didn’t want to pay higher property taxes to educate nonwhite children. They organized state and local campaigns easily, putting moderate amounts of money towards candidats and ballot measures that would deepen the segergation of school dolalrs. With a VAT funding schools, these people would have to focus on the federal government if they wanted to revolt.

Plus, rightwingers hate the property tax! They’re always talking about getting rid of it, lessening it, weakening it. Why not take them up and take them on and say, okay, if you don’t want to tax property to fund your schools, then don’t. We’ve got the VAT.

The libertarian think-tank Cato Institute thinks Nixon’s proposal was a terrible idea, which really means we should consider it. The fact that it’s a Nixon policy is pretty juicy too, given the way moderates love to punch left. It’d be easy to say to the Pelosis of the world: hey, listen, this is Nixon’s idea!

Finally, I think a VAT for schools is a kind of non-reformist reform. It certainly doesn’t institute socially controlled property. But it weakens the particular kinds of forces that hold US capitalist relations of production in place. Imagine a US where the “good neighborhood/good school” dynamic isn’t a thing anymore. I think that gets us closer to an inflection point where relations of exploitation–the peculiar variety of relations we have here–aren’t as secure.

You just read issue #116 of Schooling in Socialist America. You can also browse the full archives of this newsletter.